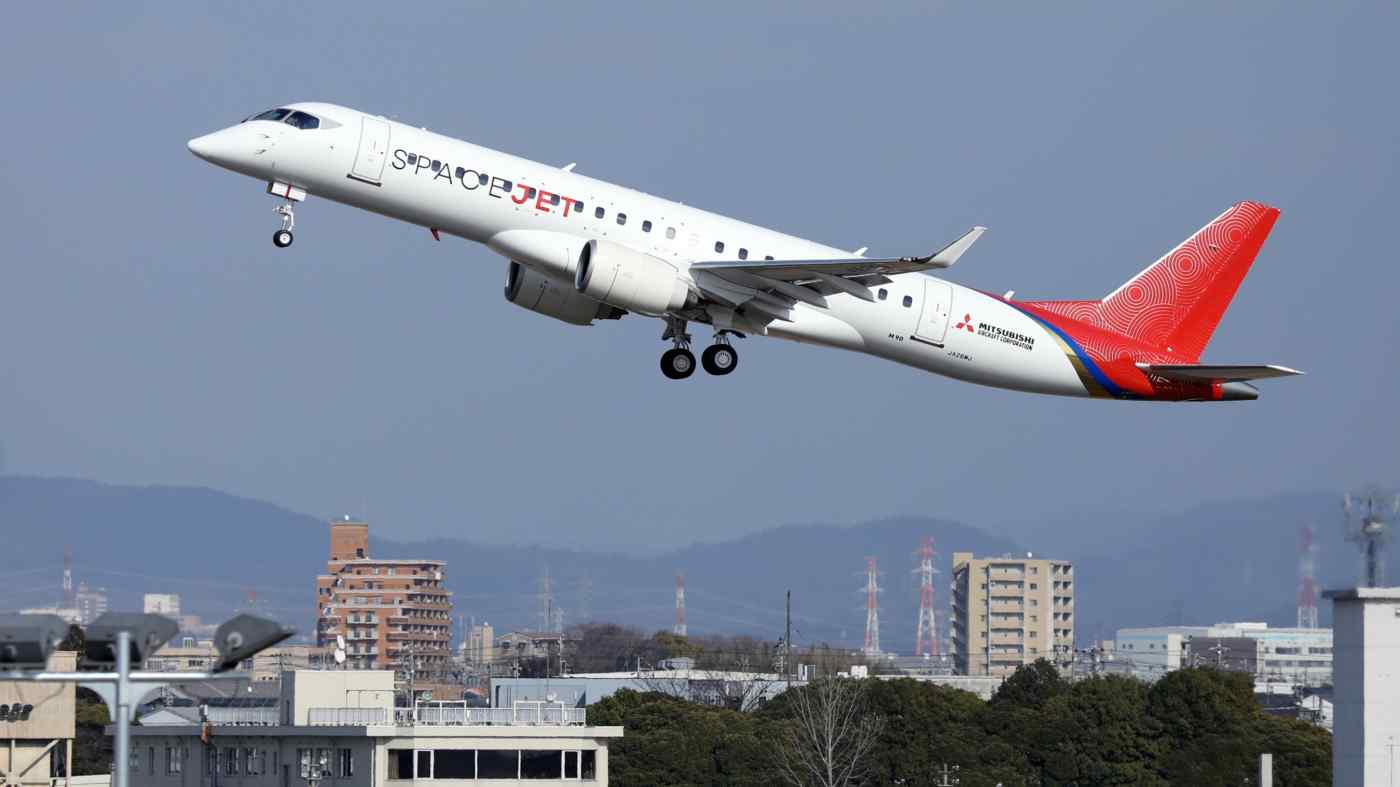 Mitsubishi said on Thursday it was freezing its SpaceJet program, slashing the annual budget to just one-tenth of current levels over the next three years and foregoing a plan to obtain regulatory approval.

The machinery maker has now gotten far away from its ambitious goal of creating a domestic jet aircraft industry amid hopes for the revival of Japanese manufacturing industries.

Why did the Mitsubishi jet project stall? A careful look at its background shows how it strayed from its planned course after violating an "iron law" of aircraft development.

"Aircraft production is a long-cherished dream for both Japan's public and private sectors. We want to play a role in key industries," then Mitsubishi Heavy President Kazuo Tsukuda emphatically said at a press conference in March 2008 announcing a decision to give the green light to the jet project.

But in the process leading to the decision, Tsukuda also warned that it could cost hundreds of billions of yen if it failed, and the company should brace for risks involved in the huge project. Honda started its HondaJet project with little expertise, but started delivering the eight-seat aircraft in 2015 after 30 years of R&D. (Photo courtesy of Honda)

Mitsubishi Heavy has spent about 1 trillion yen ($9.6 billion) on the jet development project. But its dream of seeing the jet fly around the world is now fading.

Mitsubishi Aircraft, a Mitsubishi Heavy subsidiary in charge of the jet development project, posted a net loss of 526.9 billion yen in the fiscal year ended in March. The subsidiary is based in the town of Toyoyama, Aichi Prefecture, in central Japan.

There are plenty of reasons for the project's failure. The loss of skills since the production of the YS-11 propeller plane ended in 1973 had a significant negative impact.

During that period, Japanese aircraft-related manufacturers, including Mitsubishi Heavy, have been limited to supplying parts to U.S.-based Boeing and other plane makers, as well as licensed production of aircraft.

Developing and manufacturing an entire airplane, which comprises as many as 1 million parts, is a different story.

The aircraft manufacturing unit was not alone in paying the price for the three lost decades.

For example, a type certificate is required to commercialize an aircraft. In the global aircraft industry, manufacturers first obtain type certificates from the authorities of countries where they produce airplanes, in hopes of having them confirmed by other countries.

As there has been no need to obtain a type certificate in Japan in the post-YS-11 era, however, "there were only four people who had related expertise at the Ministry of Land, Infrastructure, Transport and Tourism" when Mitsubishi Heavy gave the green light to the jet project, said a former Mitsubishi Heavy official.

Mitsubishi Heavy itself has made mistakes, including fomenting confusion over personnel changes.

In this respect, the HondaJet provides a useful lesson.

A simple comparison is difficult because the eight-seat HondaJet is much smaller than the SpaceJet. But there is one clear difference between Honda and Mitsubishi Heavy.

Honda started its jet project with little expertise. But the company nevertheless started delivering HondaJets in 2015 after some 30 years of research and development. Behind the success is one unwritten law. Michimasa Fujino continued as leader of the HondaJet development project for 30 years.

This means that having a "God" on an aircraft project, a person with full authority, is crucial.

Ben Rich, who later developed stealth fighter aircraft and took over from Kelly, recalled that when he visited the Skunk Works for the first time, he realized that the entire aircraft production process revolved around Kelly. He had access to all information on the project and made decisions with full authority.

This was not necessarily a style unique to Lockheed. Joe Sutter was an engineer and the driving force behind major U.S. plane maker Boeing's establishment of its solid position after World War II. He was also known as the developer of the 747 jumbo jet. The design of every part, down to the smallest bolt, required his approval.

It would be impossible to have such an absolute ruler in today's aircraft production, in which complexity has escalated and materials have become diverse.

But there is a need to have a leader with absolute authority who supervises the entire project. What is important is not to change such a leader frequently.

In the case of Honda, Fujino continued to reign as leader of the jet development project for 30 years.

He imposed two rules on himself to embrace Kelly's philosophy. One was to make sure that information was directed to him while abolishing unnecessary meetings. The other was not to bring up a matter again once a decision on it had been made.

Although development of the HondaJet was carried out in the U.S., Honda's headquarters in Tokyo continued its policy of not interfering in the development work even when the company president changed.

There have been five presidents of Mitsubishi Aircraft since the company began development of the SpaceJet, formerly known as the Mitsubishi Regional Jet, in 2008. The company started losing its way after Hiromichi Morimoto became the fourth president in 2015. Morimoto had long experience in selling thermal power plants overseas, and he was in New York as head of Mitsubishi Heavy's American unit just before he was tapped as president of Mitsubishi Aircraft. As a result, he knew very little about aircraft production.

"I thought Miyanaga was joking when I was told out of the blue that I would become president of Mitsubishi Aircraft," Morimoto recalled. For Shunichi Miyanaga, who became president of Mitsubishi Heavy in 2013, tapping Morimoto for the aircraft project was meant to keep the company's aircraft and defense division -- which was known for being independent-minded and proud -- in check.

The MRJ made its maiden flight in November 2015, but Mitsubishi Aircraft said the following month that initial delivery would be rescheduled for the fourth time after a serious flaw was found -- insufficient wing strength. That prompted Miyanaga to replace Morimoto with Hisakazu Mizutani, from the aircraft and defense division, after just two years. Nagoya Aerospace Systems Works took back management control, but that was the beginning of further management turmoil.

After putting the MRJ business under the CEO's direct control in November 2016, Miyanaga hired more foreign engineers. He named Alexander Bellamy, a former executive of Canadian regional jet maker Bombardier, as head of MRJ development in 2018. Many non-Japanese experts were brought in under Bellamy, effectively taking away control from Nagoya Aerospace Systems Works.

But Bellamy, an engineer who had been hired as a type certificate expert, was unable to bring together the "two Mitsubishi jets" made by Nagoya Aerospace Systems Works and the team of foreign engineers. The delivery of the MRJ was postponed for the sixth time and Bellamy stepped down after just two years in June this year.

In postwar Japan, electronics and automobile manufacturers have led the country's economy. As former Mitsubishi Heavy President Tsukuda pointed out, creation of homegrown jets -- which entails numerous supporting industries -- was a long-cherished dream of the Japanese business community. It is nothing but a sad ending that the dream has been dashed due to constraints specific to big companies.