BANGKOK -- South Korea recently held a special two-day summit with members of the Association of Southeast Asian Nations. Four days before it began on Nov. 25, North Korea's state media Korean Central News Agency reported that leader Kim Jong Un had received a summit invitation from Seoul but that he had declined.

"The kind offer is appreciated but the international conference does not have much to do with us," the agency said.

Why North Korea's leader was invited in the first place can be traced back to a year earlier.

At the regular ASEAN-South Korea summit in Singapore in November 2018, Indonesian President Joko Widodo suggested that Kim be invited to this year's summit commemorating the 30th anniversary of ASEAN-South Korea relations.

South Korean President Moon Jae-in, a proponent of North-South reconciliation, welcomed the idea. But Joko apparently had not informed ASEAN members beforehand. According to diplomatic sources, Singapore, the 2018 ASEAN chair, rejected it and Thailand, the 2019 chair, was also opposed.

Some countries openly complained. "We are being used as a tool [to bring in North Korea]," was the common refrain. ASEAN reportedly informed South Korea that they would not sign the invitation. This left South Korea extending the invitation alone, which was refused due in part to stalled U.S.-North Korea denuclearization talks.

The disagreement over the invitation highlights current South Korea-ASEAN relations.

It was South Korea that made the first move to strengthen ties. Moon announced his country's New Southern Policy aimed at enhancing cooperation with ASEAN during his visit to Jakarta in November 2017, the same year he was elected.

Moon's relations with the U.S., China, Japan, North Korea have not been particularly warm. But the country feels it can make up for this with a pivot toward the ASEAN market, with its population of over 600 million.

In September, Moon became the first South Korean president to visit all 10 ASEAN members, despite being only in the middle of his five-year term. At this year's summit with ASEAN in Busan, South Korea struck a number of deals, such as Hyundai Motor's announcement of construction of an automobile factory in Indonesia, its first in the region.

South Korea regards Japan as a rival in the ASEAN region, but cannot measure up to Japan in terms of regional economic cooperation. The country's trade with ASEAN is about 70% that of Japan's, while direct investment stands at 30% and official development aid at a paltry 10%. 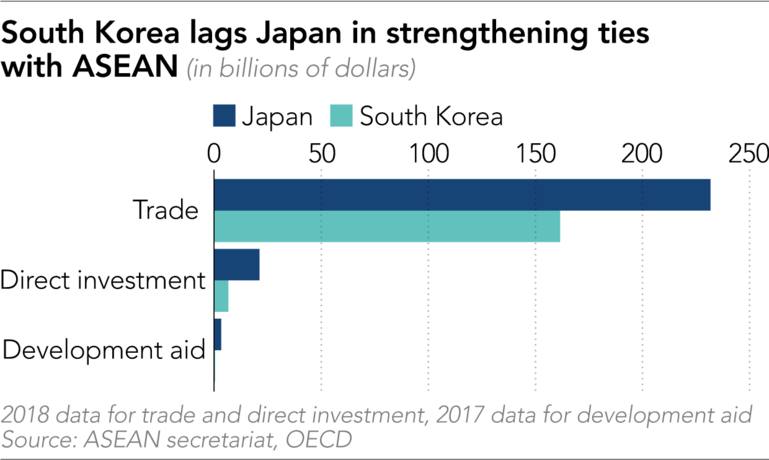 One exception is Vietnam. Since Samsung Electronics started smartphone production there in 2008, Vietnam accounts for about half of South Korea's total trade and investment with ASEAN, exceeding that of Japan. However, Tokyo seems unfazed, with one official commenting, "Samsung is amazing, but that's it. We're not concerned about [South Korean] diplomatic overtures to ASEAN."

Other ASEAN members would welcome more investment and assistance from South Korea. But they still regard the country, with its population of 50 million and slowing growth, as a lukewarm export market at best. And unlike the U.S., China and Japan, they cannot count on Seoul in terms of security issues.

But it is premature to say that ASEAN will not benefit much from South Korea's New Southern Policy. 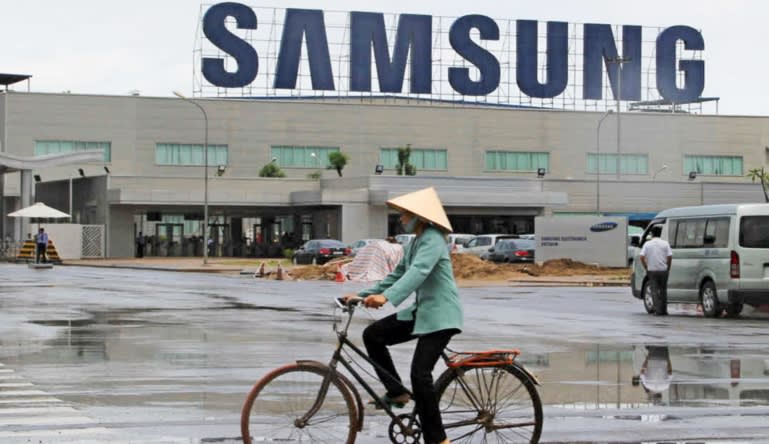 Centrality is key to ASEAN diplomacy, making the bloc a good partner for creating an environment conducive to multilateral cooperation. By joining forces, these comparatively minor countries can have a greater say in regional affairs, and act as buffer between dueling major powers. A prime example is the bloc's annual East Asia Summit, which Japan, the U.S., China, South Korea, India and Russia regularly attend.

However, this centrality is being eroded. China is pushing ahead with its massive Belt and Road initiative, while Japan and the U.S. are countering with an Indo-Pacific plan. ASEAN has its own Indo-Pacific plan and is cooperating with Belt and Road, but the bloc seems to be slowly losing its leverage as a whole.

It still remains the driving force behind the proposed Regional Comprehensive Economic Partnership, but a final agreement remains elusive as India -- counted on as a key member -- cools to the idea. U.S. President Donald Trump, left, and North Korean leader Kim Jong Un take a walk prior to a working lunch during their summit in Singapore on June 12, 2018.   © Reuters

So how can ASEAN regain its diplomatic clout? For one, it could play a more prominent role in North Korean denuclearization talks, a topic that was avoided during the November summit. The six-party negotiations, led by the U.S. and major regional powers, have stalled and Trump-Kim summits have failed to yield any concrete results. The situation could benefit from ASEAN input.

It is not as if ASEAN is unaffected by the Korean Peninsula problems. The region has been subject to terrorist acts in which Pyongyang's involvement is suspected, such as the Yangon bombing in 1983 that killed 17 people, including high-level South Korean officials. There was also the Kuala Lumpur assassination of Kim's half-brother in 2017. In addition, North Korea has abducted citizens of Singapore, Thailand and Malaysia.

Despite all this, ASEAN members still maintain diplomatic relations with North Korea. The ASEAN Regional Forum, an annual security conference that has been held since 1994, is one of the few international conferences in which North Korea participates. And Singapore and Vietnam provided the venues for the historic U.S.-North Korea summits since 2018.

If ASEAN leverages its relative neutrality, it can play a major role in international affairs. As regards North Korea, "ASEAN members would be the most suitable to serve as a 'sherpa' for Pyongyang as it climbs the 'Everest' of economic reforms," said Kavi Chongkittavorn, a senior fellow at Chulalongkorn University of Thailand.

If so, a win-win situation would ensue: South Korea would gain increased visibility in ASEAN markets while the bloc would gain prestige from having helped broker a settlement to the thorny Korean Peninsula standoff.

Former South Korean President Roh Moo-hyun, who mentored Moon, aimed to strike a balance between major powers in his foreign policy. But that role has shifted to ASEAN, which could help solve the North Korean issue if it thinks big and lends its weight to influencing major powers.