TOKYO -- The coronavirus crisis is dramatically adjusting the relative strength of companies, a trend not lost on the stock market, where the share price of Shimano, the big bicycle parts maker, hit another all-time high this month.

Shimano's market capitalization at the end of January, well before the outbreak became a full-blown pandemic, was 1.6 trillion yen ($15.3 billion). That was good for No. 86 in Japan. But by the end of July, the component maker's market cap reached 2.1 trillion yen, putting it at No. 61 in the same ranking.

The market is telling us something.

First of all, the trend underscores behavioral changes as many people try to avoid close contact with others and even shun enclosed, crowded spaces. Cars and bicycles are helpful in this respect as they allow their drivers and riders to avoid packed commuter trains.

Some Tokyoites have traded their daily 20-minute morning commutes on a packed train for an hour of pedaling a bicycle to work.

The stock market also has something to say about business strategy. Globalization, it says, is crucial.

Shimano is one of Japan's most globalized companies; its overseas sales make up 89% of its total sales. Its parts are essential for high-end road race bicycles and mountain bikes. Even at its Japan offices, Shimano's official language has been English since 1998.

Nissan, which earns 78% of its sales outside Japan, has been forced to restructure its overseas operations due to its unique managerial crisis. The automaker has announced that it will either wind down or limit sales in South Korea and Southeast Asia. It has also announced that it is closing plants in Indonesia and Spain. Its market capitalization has shrunk to 1.5 trillion yen from 2.5 trillion yen in January, putting it at No. 85 in Japan. It had been No. 53. 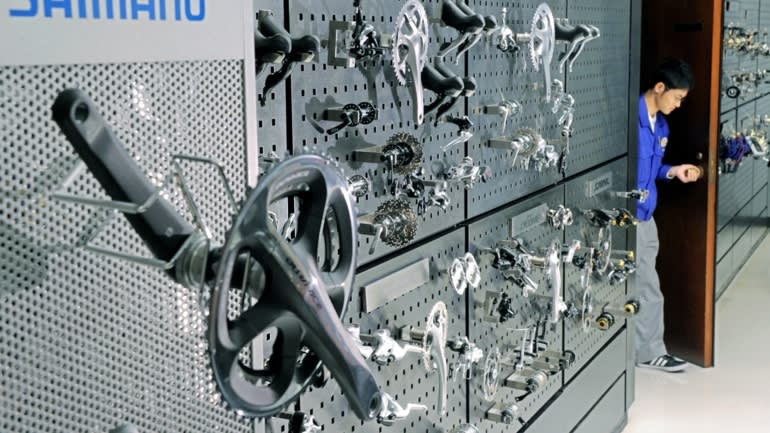 Shimano's overseas sales make up 89% of its total sales. So even at its Japan offices, its official language is English.

JR West, meanwhile, totally relies on domestic demand. Due to the pandemic, it has suffered a drastic fall in passenger numbers, already on the decline due to Japan's dwindling population. Its market value has decreased to 0.9 trillion yen from 1.8 trillion yen, sinking it to No. 138 in Japan's market cap ranking.

Shimano's, Nissan's and JR West's market cap positions reflect their globalization strategies and show how more than ever the stock market is urging companies to go global.

This has come about since the Lehman shock of 2008, when they began implementing conservative financial strategies.

While Japanese companies were building their capital, their U.S. counterparts went in the opposite direction, their ratios dropping to 40% from 45%.

This appears to make them ripe to be acquired, but there is a miscalculation which says that unlike during the Lehman crisis, it is currently difficult to snap up foreign companies at bargain prices. After the 2008 shock, stock prices went south and did not bottom out for six months. These days, however, New York stocks look buoyant. In July, the U.S. Nasdaq composite Index recorded another in a string of all-time highs.

But this is deceiving. While the shares of The Big Five -- Google, Apple, Facebook, Amazon.com and Microsoft, often referred to by their group acronym Gafam -- are climbing, value stocks dominated by financial and capital goods companies remain at low levels.

Compare U.S. stock prices at the end of January with those at the end of July. Shares of American Airlines Group plummeted 59% for the obvious reason. But even companies that did not have to mothball large swathes of their operations were walloped. Citigroup's shares lost 33% and General Electric 51%.

This does not square with the Nasdaq index's historic climb. With companies all over the world failing at the fastest pace since the Lehman crisis, there are actually many that can be bought at bargain prices.

Some Japanese companies also have something else going for them, their management culture. When Kyocera in 1990 acquired AVX, a U.S. electronic parts maker, in 1990, it did so by sticking to wakon yosai, a philosophy that teaches those adopting Western culture to do so while being mindful of traditional Japanese spirituality.

The deal ended up not only compensating for one of Kyocera's weaknesses -- its small presence in Western countries -- it also contributed to a threefold growth in sales and a thirteenfold surge in profit through 2019.

Kazuo Inamori, the founder and chairman emeritus of Kyocera, constantly preaches his own brand of wakon yosai, which tells him to be considerate of business partners and to have good intentions when dealing with them no matter their nationality. Heeding the wakon yosai spirit, Inamori did not change AVX's name nor its management, and even went so far as to adopt American-style stock-linked compensation for the subsidiary's executives.

But the AVX acquisition is a rare success story in corporate Japan, where many purchases of foreign companies since the 1990s have ended up in failure.

Capitalism is undergoing big changes in today's troubled world. In some places, it is becoming altruistic, with shareholders and business executives abandoning their egos and bowing to a wider spectrum of stakeholders, including employees and society at large. The goal is more sustainable growth. The pandemic has also forced corrections on Inamori's wakon yosai approach to business. Behind the successful fusion of Kyocera and AVX has been close communication. Once every two months the companies' executives would get together to foster camaraderie. They would do so without regard to the bottom line. But the virus has made travel between Japan and the U.S. difficult.

Japanese companies that are determined to push aside the coronavirus's impediments and pursue foreign acquisitions face other obstacles.

This negative could be compounded as the virus makes physical exchanges difficult. If Japanese companies' headquarters lack a complete understanding of local conditions, changes in the global market could go unnoticed until it is too late. Then again, today's headwinds could ultimately convince Japanese companies of the need to diversify their executive teams.

The pandemic is not only escalating tensions between the U.S. and China, it is also intensifying divides elsewhere in the world. Do Japanese business executives use the unprecedented situation to back away from globalization and confine operations to within Japan, or to break out of their shells? The market caps of Shimano, Nissan Motor and JR West can help them decide.