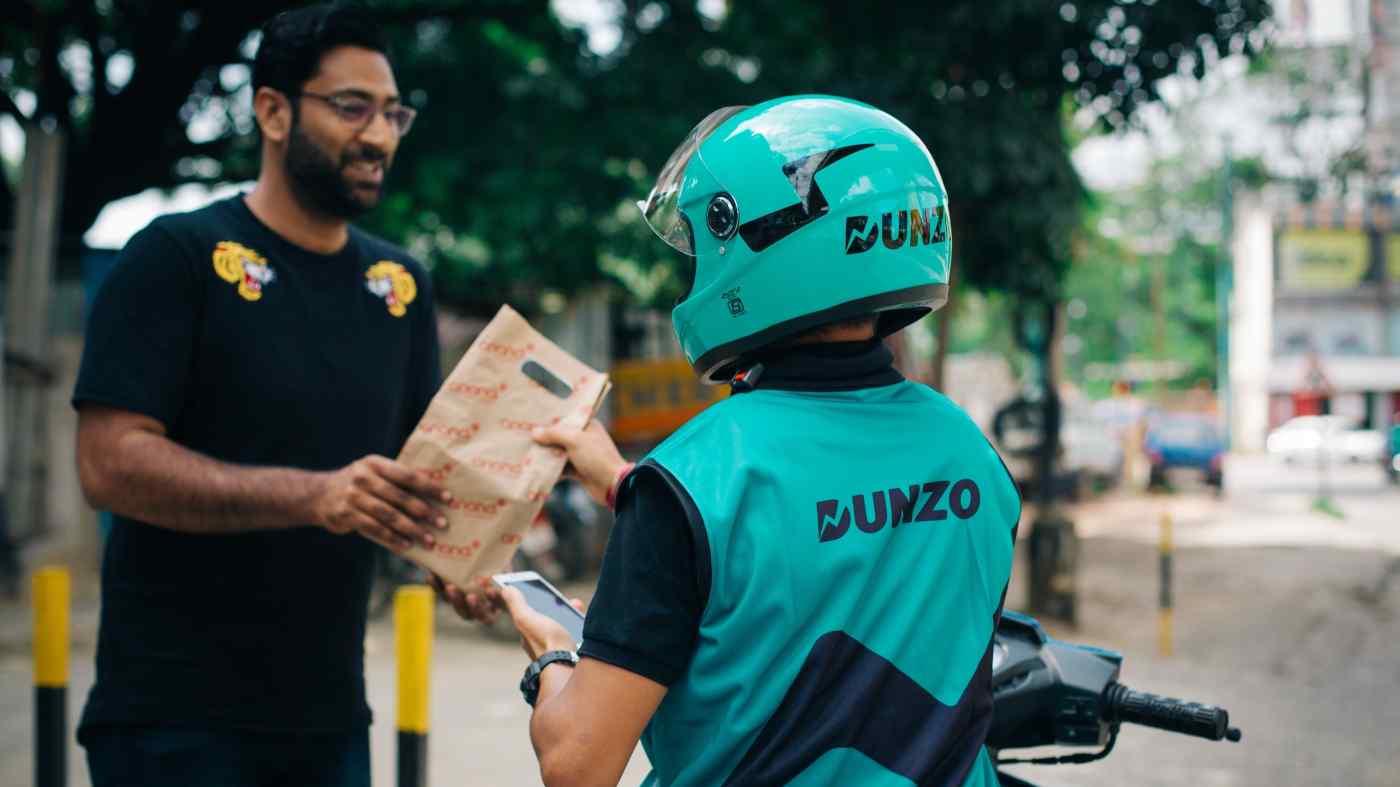 MUMBAI --- Delivery startups are springing up across the world amid the COVID-19 pandemic, with most focusing on delivering meals. But Dunzo Digital, backed by Google, has chosen a different niche, offering quick motorbike errand-running and deliveries.

The Bangalore-based company's strategy seems right so far, as its business grows and its valuation reaches $250 million, bringing it closer to the coveted title of unicorn, as billion-dollar startups are called. Its unique "hyperlocal" service model utilizing artificial intelligence and other software technologies is gaining traction from both consumers and merchants.

When I am cooking dinner, let's say I realize that I have run out of ginger. I open the Dunzo mobile app and enter "ginger" in the search box. The app lists several nearby shops that sell it. I just pick one of the shops, click the box labeled "ginger" from the item list, select the amount "50 grams" from a pull-down menu, proceed to checkout and complete the order by paying with my bank debit card.

A delivery agent on his motorbike who happens to be near the shop picks up my order, does the shopping and delivers the ginger, typically within half an hour but sometimes as quickly as 15 minutes, depending on the proximity of the shop and other conditions.

When I searched for "ginger," more than one store option appeared. All are partner merchants of Dunzo. Most are small mom-and-pop retailers. When such an establishment becomes a partner, it can use Dunzo's cloud-based e-commerce platform and sell items via it. Dunzo is the second startup that CEO Kabeer Biswas has co-founded. (Photo by Takehiko Koyanagi)

In other words, small local retailers can instantly onboard an e-commerce platform that handles product listing, order processing, payments and delivery. The more local merchants join the platform, the more likely customers are to find a nearby retailer selling the items they want.

Kabeer Biswas, Dunzo's co-founder and chief executive, calls this cycle of customer needs, delivery agents standing by and retailers in proximity to most users an ecosystem. "Merchants are the second customer," he says, after users. "COVID-19 accelerated small merchants to realize they need to go digital," he added. Biswas feels Dunzo is becoming a platform of choice among those small merchants who are finally going digital.

Such short-distance shopping and delivery services may prove popular in other emerging economies where the urban transportation infrastructure is underdeveloped and traffic is snarled. But so far, the only other major example of a shopping service that uses motorcyclists is Indonesia's Gojek, another Google-backed startup. Gojek's service, however, is a byproduct of its main motorbike ride-hailing service, so its technology platform for shopping seems less advanced.

Biswas came up with the idea of a mobile-based errand service in 2015 when he asked a group of friends on WhatsApp what errands they wanted him to run. "They wanted me to take laundry to their dry cleaners, carry lunchboxes from home to the office and buy some grocer[ies] for them," he recalls.

He noticed that most of their requests involved traveling from one location to another, and realized that getting things done that require travel is among the most time-consuming and cumbersome tasks in Indian cities. That led to the idea of launching a business that saves time. Today, people still use Dunzo to get their laundry brought to the dry cleaners and lunchboxes delivered to their offices, in addition to quick shopping errands.

At present, it takes an average 24 minutes to complete a delivery on Dunzo. "Task completion time of 1 minute is our ultimate goal, using drones in the future," Biswas told Nikkei Asia.

Its mission of saving time led Dunzo to adopt a strategy of serving small geographical cells. It divides its delivery area into units with a radius of 2.5 km so that customers living or working in each unit can be served quickly no matter where they are. When Dunzo launches in a city, it focuses on increasing the number of these small unit service districts, assembling them piece by piece like a jigsaw puzzle. Once decent coverage in a particular city is established, the company starts to tackle another one.

It now operates in 300 service districts in eight big cities, including Bangalore, Mumbai and New Delhi. "We will keep building denser meshes in those eight cities this year, rather than overstretching our resources to [cover] more cities," Biswas said. He plans to increase the number of cities Dunzo operates in to 20 by the end of 2022, but adds that building good coverage in each one is a higher priority than the city count.

Biswas reckons that building a dense service network improves the customer experience, which increases usage. That, in turn, improves merchant revenue and, thus, Dunzo's profitability. In fact, he said the company's quarterly earnings before interest, tax, depreciation and amortization has turned positive in Bangalore, where Dunzo first launched.

The company was growing fast before the pandemic and has since accelerated. And the pace is continuing, even after coronavirus restrictions in big cities eased last autumn.

Dunzo's gross merchandise value for the six months through December 2020 grew by about 145% over the same period the year before, and its monthly GMV is currently growing by 10% to 15% a month, the company said. In a news release in January, Dunzo described itself as "an annualized $100 million GMV business," which is likely an estimate for the 12 months through June this year.

The most likely benefit from the investment is that Dunzo's hyperlocal business model may become increasingly successful, giving Google a decent profit from India's potentially giant e-commerce market. Another potential benefit for Google is that it can use Dunzo's experience and data for its own growth and tech experiments.

Google is very likely providing Dunzo access to its geographic, AI and other advanced technologies -- and Dunzo finds that helpful for its delivery routing optimization and geographical supply-demand optimization, as well as in developing autonomous drone flight software.

Dunzo is the only Indian consumer business that has obtained permission to conduct outdoor autonomous drone flight tests from the Indian government, and those tests are ongoing. Once such efforts lead Dunzo to an early business application of autonomous drones, that would generates precious business data, which would be useful to Google as well.

The U.S. tech company has invested well under $100 million in Dunzo so far, in sharp contrast to its massive $4.5 billion investment in Reliance Industries' Jio Platforms last July. The Google-Jio partnership has so far produced no significant collaboration or synergies. Dunzo's experimental activities may generate a bigger payoff for Google, despite its relatively modest investment.