Is talk of an Olympic boycott real or diplomatic Kabuki? TOKYO -- A recent comment by U.S. State Department spokesman Ned Price aroused speculation that the U.S. is considering a boycott of the 2022 Winter Olympics in Beijing and is ready to talk about taking joint action with its allies.

"It [a boycott] is something we certainly wish to discuss," Price said when asked about the matter at a media briefing earlier in April.

The deepening row between Western countries and China over the latter's human rights abuses in the Xinjiang Uyghur Autonomous Region and Hong Kong reminds many of the boycott of the 1980 Moscow Olympics by the U.S. and other countries, including Japan and West Germany, amid the Cold War.

Will athletes be forced to shed bitter tears again?

The boycott is not a foregone conclusion, and Price's remark should be considered gamesmanship as the U.S. pressures China on various issues.

In fact, White House press secretary Jen Psaki later said the U.S. was "not discussing" a boycott of the Beijing Olympics, set for next February.

In early 1980, the Japanese government said dispatching athletes to the Moscow Olympics was undesirable, responding to then U.S. President Jimmy Carter's call for a boycott. The Japan Olympic Committee convened an extraordinary meeting later in the year and decided not to participate in the games. With the government holding the budget for athletic activities hostage, the JOC had little choice but to comply, according to people familiar with the matter.

Many Western countries, especially those in Western Europe, opted to send teams to Moscow.

Of the member states of the Organization for Economic Cooperation and Development at the time, only six countries -- the U.S., Canada, West Germany, Japan, Norway and Turkey -- boycotted the event. France and Italy sent athletes, and the British Olympic Association did so in defiance of its government.

It may be fair to say that Carter's move, seen as politically motivated ahead of a U.S. presidential election, was unacceptable to many European democracies where the spirit of the Olympics has become an integral part of their cultures. West Germany was an exception, but it had no choice as it continued to take the brunt of the Cold War.

Athletes and the overall sports community have greatly increased their cultural presence and influence thanks to advances in information and communications technology, and to their commercial success.

Hearing Price's remark, the U.S. Olympic and Paralympic Committee was quick to voice its opposition to a boycott, saying young athletes should not be used as political pawns. 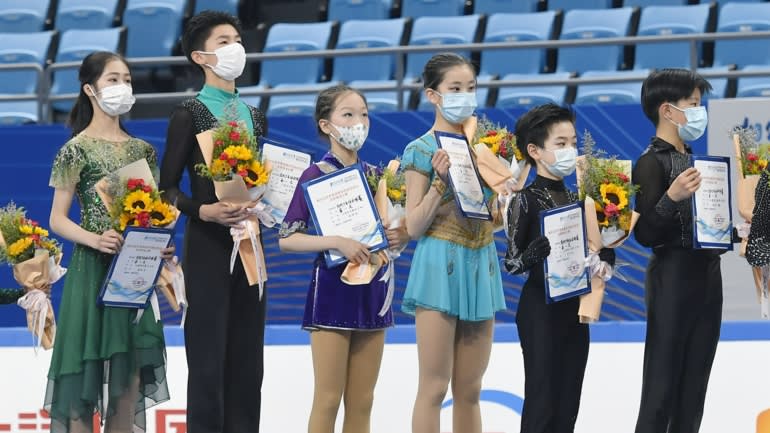 Masked figure skaters at the prize ceremony of a competition in Beijing on April 5. The 2022 Winter Olympics could make a potent statement on behalf of the Chinese Communist Party.   © Kyodo

Even in Japan, where politicians have begun to use the phrase "athletes first" in conversation, calls for a boycott are unlikely to spread quickly.

In fact, any serious discussions about boycotting the Beijing Olympics are unlikely to begin until the end of the Tokyo Games. Many fear that if such talks begin earlier, China would play the card of boycotting the Tokyo Olympics.

Much of the public could lose interest in big sports events and start to blame these global gatherings for leaving behind a host of problems. This would give politicians an opportunity to ignore athletes in policymaking.

If National Olympic Committees lose their independence and autonomy amid a wave of antipathy, the Olympics as we know them could be over. In this sense, the Tokyo Olympics holds the key to the future of global sports events.

In the past, no matter how often it was stressed that an Olympics is a "celebration of peace" or "politically neutral," those in power used the hosting of these events to boost national prestige or for political propaganda.

The 2008 Olympics in Beijing played a role in having the world acknowledge the Chinese Communist Party's monopoly on power. Some experts believe that participating in the Beijing Winter Games would be tantamount to bowing to China's heavy-handed approach in Hong Kong and its excuses for human rights abuses in the Xinjiang Uyghur region.

Meanwhile, some athletes have begun to speak out against discrimination and human rights violations, including Japanese professional tennis player Naomi Osaka. While the IOC bans athletes from making political statements while an Olympics is being staged, if more athletes become outspoken and a movement spreads globally, the Olympics' corporate sponsors would have to take heed.

As the number of Olympic stakeholders has reached unimaginable levels since the Moscow boycott 41 years ago, the IOC faces a serious challenge.