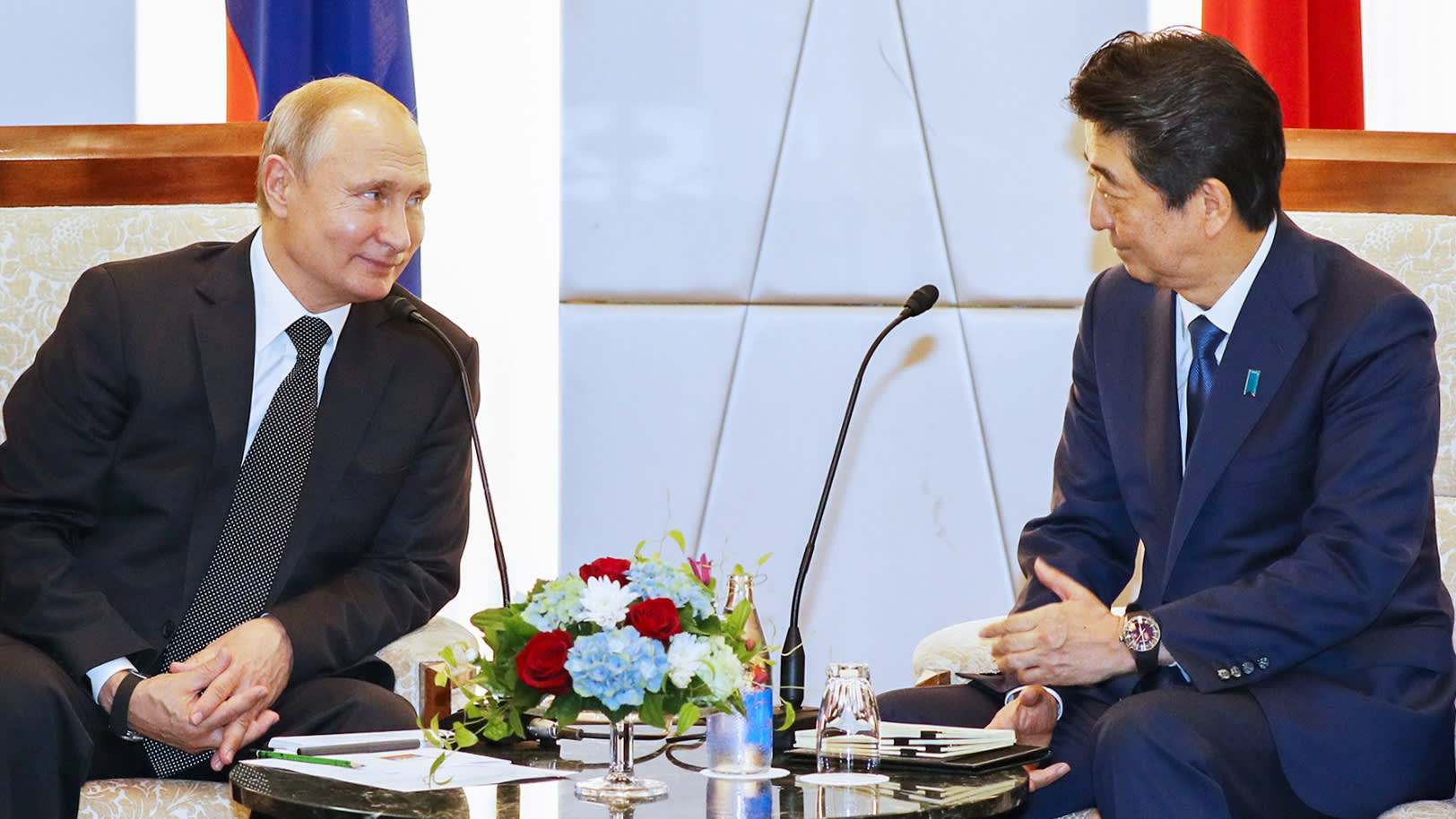 Vladimir Putin and Shinzo Abe meet in Osaka on June 29: For decades, their nations have made little progress toward solving a territorial dispute left over from World War II.

TOKYO -- It appears that the grand bargain proposed almost three years ago by Japanese Prime Minister Shinzo Abe to bring an end to a territorial dispute with Russia has not panned out.

Since then, the Japanese government has been urging Russia to accelerate negotiations based on a 1956 joint declaration between the countries that stipulates Russia is to hand over a group of islets and another small island north of Hokkaido after a peace treaty is signed.

In question are the Habomai islets and Shikotan Island. They are part of a larger group of islands known in Japan as the Northern Territories and in Russia as the Southern Kurils.

But Russia has been cool to the Japanese government's call to hasten the talks.

Abe and Russian President Vladimir Putin met at the end of June in Osaka on the sidelines of the Group of 20 summit. No progress was made regarding the territorial dispute; the leaders merely confirmed that the talks would continue.

The countries are now expected to aim lower and agree to hold joint economic activities on the islands.

But Japan needs to be careful. Russia has an ulterior motive: to cement its control of the disputed islands.

"It is not easy to overcome our differences on the difficult issue that has been left unresolved for more than 70 years since the end of the war," Abe said at a joint news conference with Putin after their talks in Osaka on June 29.

He acknowledged that the countries remain far apart over the territorial dispute but said he and Putin had affirmed their "strong determination" to steadily move the negotiations forward.

Putin promised to continue the dialogue but showed his recognition that the negotiations will inevitably be prolonged. "Painstaking work" lies ahead, he said.

In November 2018, during a meeting with Putin in Singapore, Abe declared that Japan would accelerate peace negotiations based on the 1956 Japan-Soviet joint declaration, which Putin has recognized as valid.

In December 2016, at meeting with Putin in Yamaguchi Prefecture, Abe tried to kick the negotiations into gear by calling for joint economic activities on the islands. Putin was agreeable.

With that, Japan backed down a bit and let it be known it would be seeking the return of Shikotan Island and the Habomai islets rather than all of the disputed islands.

Abe also pressed Putin for a prompt decision on the matter.

In lowering its demand, Japan had expected certain results, specifically that the territorial row would be settled and documents signed when Putin visited Japan for the recent G-20 summit.

Instead, Russia remained cool. The 1956 joint declaration does not specify the grounds or conditions for handing over the islands, Putin said. "Everything," he added, "depends on negotiations."

Russia has set a precondition for negotiations -- that Japan first acknowledge the four disputed islands became part of Russian territory as a result of World War II.

Furthermore, Russia has made it clear that the Japan-U.S. security alliance must be discussed in relation to a Japan-Russo peace treaty. Moscow says it is alarmed by the possibility of American troops being stationed on the islands after their return to Japan. 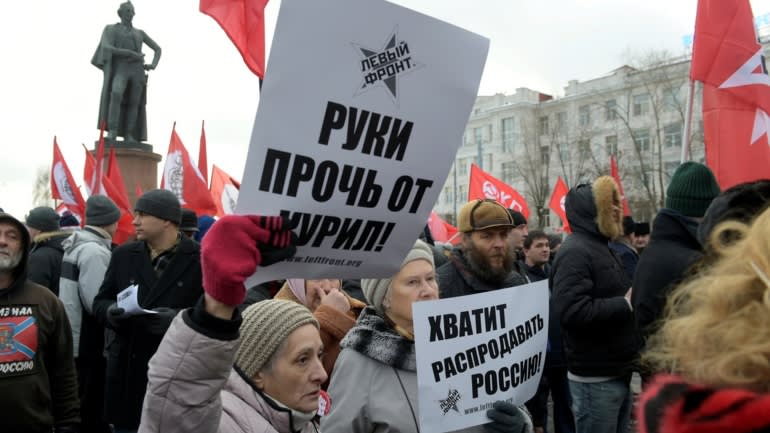 Vladimir Putin cannot afford to further anger Russians, some of whom in January protested in Moscow "against the transfer of the Kuril Islands to Japan."   © AP

Given these conditions, it is unlikely the Putin administration will agree to hand over Shikotan and the islets.

Japan also failed to achieve any specific results regarding joint economic activities on the islands during the Abe-Putin meeting in Osaka.

The leaders issued a statement after their meeting that advocates the continuation of negotiations based on the 1956 declaration and welcomes the progress made so far toward implementing economic activities.

Putin often speaks positively about concluding a peace treaty with Japan. In one such statement he said, "Shinzo and all of us hope for the complete normalization [of bilateral relations] and the conclusion of a peace treaty."

But when asked in June during an interview on Russian state-run TV whether there are plans to "bring down Russia's flag" on the Southern Kurils, Putin replied quickly. "No," he said. "We do not have any such plans."

In Russia, Putin's popularity has been on a rapid descent. His administration is in a rut. It eroded its popularity when it raised the age of pension eligibility. With public opinion turning against him, Putin probably cannot agree to cede even a tiny fraction of territory.

If Japan and Russia want to make any significant progress toward settling the territorial dispute and concluding a peace treaty, the only way to move forward at this point is by focusing on the proposed joint economic activities.

The current round of talks regarding economic activities on the islands began after Abe in May 2016 proposed a package of projects during a meeting with Putin in Sochi. But the idea was first brought up in November 1996 when then Russian Foreign Minister Yevgeny Primakov, on behalf of then President Boris Yeltsin, floated it while visiting Japan.

Moscow has since appeared keen to go in this direction.

In Osaka, Putin voiced his desire to see some pilot projects begin by saying it is important that there has been "certain progress" toward the implementation of proposed joint economic activities.

The two governments have agreed to start test projects, in tourism and waste disposal, perhaps this autumn. Tourism and waste management represent two of the initiative's five priority areas that have been discussed. Fisheries cultivation is another.

Tokyo, however, needs to tread carefully in negotiating projects under this framework. The Kremlin has shown signs of trying to use this undertaking as a means to solidify its control of the islands and reinforce its territorial claim on them.

According to an agreement between the governments, the envisioned economic activities would be carried out under a "special economic regime" that is not regulated by either Japanese or Russian law.

But in bilateral talks over the initiative, Moscow has taken a tough stance on the issue of jurisdiction. Igor Morgulov, Russia's deputy foreign minister, has insisted that any project be carried out under conditions that are not inconsistent with Russian law. 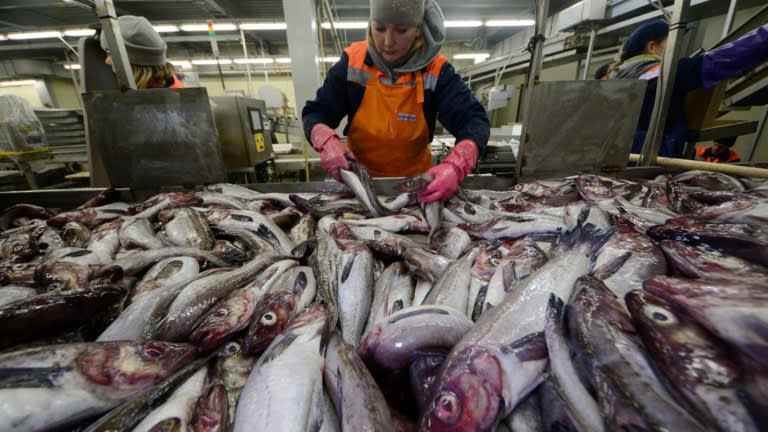 One option open to Prime Minister Abe in his bid for the return of the islands is to pursue joint economic activities, such as fisheries cultivation. In Osaka, Putin voiced his desire to see some pilot projects begin on the islands.   © Reuters

The Russian government has also taken steps to pressure Japan. It has established an "advanced socio-economic development zone" -- a sort of special economic zone -- on Shikotan Island, signaling that Moscow is ready to develop the island on its own if Japan refuses to concede on the issue of jurisdiction.

But Tokyo should not make any rash compromises regarding jurisdiction issues or the regulatory framework for economic cooperation since neither is directly related to sovereignty.

Tokyo must be similarly cautious in responding to Moscow's proposal to allow visa-free travel between Hokkaido and Sakhalin. Putin has proposed the idea as a way to ensure smooth movements of people for the joint economic activities and to nurture mutual trust between Japanese and Russian people living in surrounding areas.

Russian Foreign Minister Sergey Lavrov has promoted this proposal as a step toward eventual total visa exemptions between the two countries.

But Japan envisions allowing Japanese nationals totally free visits to the Northern Territories, which would require neither a visa nor a passport, just as former residents of the islands are allowed to visit them freely under a current program.

This is different from Moscow's proposal to allow residents of Hokkaido and Sakhalin to visit the other side without a visa. Sakhalin is Russia's largest island and seems to point straight down at the northern tip of Hokkaido. It had been part of the Japan-Russo territorial dispute in the 19th century and part of the 20th century.

By accepting Russia's proposal to permit visa-free travel between Hokkaido and Sakhalin, Japan risks being seen as recognizing Russian sovereignty over the Northern Territories.

Russia has integrated the islands into the Sakhalin region on the assumption that it has sovereignty over them. Allowing Russian residents of the islands to visit Hokkaido without a visa could give Russia legal grounds to claim the territorial dispute has already been settled.

Although the Japanese government should not make any rash move, a prolonged lack of progress in negotiations over the joint economic activities could convince Moscow that Tokyo has little interest in gaining sovereignty over the islands. The Kremlin would then have little incentive to make serious efforts toward a peace treaty.

In the late 1990s, when the late Keizo Obuchi was Japan's prime minister, Tokyo discussed joint economic activities in the Northern Territories. Although the initiative failed to produce an agreement, the governments did hold working-level talks on the matter.

At the time, the sides also set up a "border demarcation" committee to make clear that the work was part of efforts to settle the territorial dispute.

Current circumstances do not guarantee that joint economic activities would lead to a peace treaty, according to Dmitri V. Streltsov, a professor at Moscow State Institute of International Relations. But they will put Abe's diplomacy skills to the test.