Japan's 'shield' against North Korean missiles would not have worked TOKYO -- When Japanese Defense Minister Taro Kono halted deployment of the land-based Aegis Ashore missile defense system a month ago, the public worried that the nation's defenses would be thrust into a vacuum.

Not because Japan will be safe, but because it was already long exposed to North Korean missiles.

Japan's theory of missile defense had already collapsed around 2016 and 2017, when North Korea simulated a "saturation attack" -- where numerous ballistic missiles were fired -- and launched a lofted-trajectory missile, which is much harder to intercept.

Nevertheless, the Japanese government brushed off such doubts and continued to pursue Aegis Ashore, which it had promised the Americans it would buy.

Kono's decision to scrap the plan signals government efforts to explore options that actually work. At least it shows that civilian control is functioning.

The public's reaction underscored its many misunderstandings over responding to a missile attack. 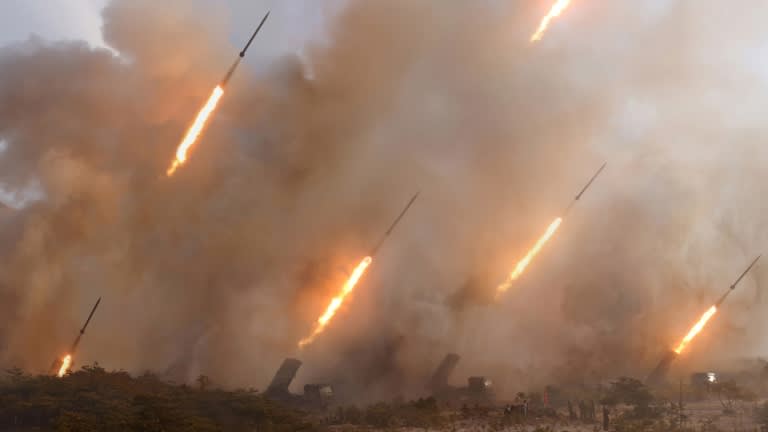 A North Korean test of a missile launch, as shown by the Korean Central News Agency on March 9, 2020.   © Reuters

A second misconception is that Japan has moved from the idea of putting up a "shield" to throwing a "spear" to protect itself.

That is because the "shield" theory was never valid.

During the Cold War, the U.S. military knew that if such rival powers as the Soviet Union or China launched a concerted ballistic-missile attack, it would be in such numbers as to make defense impossible.

Yet in the U.S., a strong belief in the country's technological prowess still feeds dreams of shooting down swarms of invading missiles.

The dream also offered a pretext for investing heavily in a new system, feeding the insatiable appetite of the defense industry.

Such a new system was premised on a limited missile attack from a small rogue state like North Korea. It was a convenient premise.

But for North Korea, why launch a missile it knows will be shot down? It is only natural for the country to pursue more effective ways, which is why Pyongyang has been approaching Russia and others to hone its skills, leading to the saturation attack and the lofted missiles.

If an effective missile defense system ever emerges, it will use next-generation weaponry, such as high-powered lasers and railguns. Mitsubishi Electric, Kawasaki Heavy Industries and Japan Steel Works have promising technologies. But their deployment is years away.

The third misunderstanding is the logic that now that missile defense does not work, Japan needs to reconsider striking enemy bases to stop impending missile launches. Static missile defense and enemy-base strikes are not mutually exclusive. Both form parts of a broadly defined missile defense.

1. Retaliate with conventional or nuclear weapons when attacked

2. Strike an enemy base to eliminate a threat if an attack is seen as imminent

4. Evacuating populations if all else fails

Such countries as the U.S., the U.K. and France put emphasis on the first two layers. Even peaceful and neutral Finland has a strong deterrence plan, holding the capability to launch precision attacks on Russian industrial areas near its border.

Japan's defense, meanwhile, has looked only at the third layer. In the face of powerful sales pitches by the U.S. military-industrial complex, not much questioning has been going on.

From the spring of 2017 to the summer of 2018, Japan began evacuation drills in anticipation North Korean missile attacks.

But the drills were suspended abruptly in June 2018 as U.S. President Donald Trump barreled ahead toward dialogue with North Korea, meeting with leader Kim Jong Un in Singapore.

Underground shelters have proved effective in the past -- such as during the atomic-bomb attacks in Hiroshima and Nagasaki. Yet by paying diplomatic courtesy to Trump, Japan has wasted valuable time implementing this option.

Much of the recent discussion within the ruling Liberal Democratic Party has tilted to enemy-base strike capability and steered away from important civil defense plans. A control facility of the Aegis Ashore Missile Defense System in Romania.   © Reuters

The fourth misconception is that Japan would have to build its attack capability ability from scratch. Under the current National Defense Program Guidelines, Japan is introducing long-range air-to-ship missiles to defend remote islands. Such missiles can also be used to attack enemy bases.

Hypersonic glide vehicles, or HGVs, currently under development in the U.S., Russia and China are more important. Japan has also started developing this kind of weaponry, which travels five times the speed of sound.

As China builds up its missile capabilities, Japan needs its own counterforce of ballistic missiles designed to strike targets several minutes after launch, instead of slower cruise missiles.

The fifth and final misunderstanding is that the decision to halt Aegis will strain Japan's relationship with the U.S. But by redirecting money earmarked for Aegis Ashore to more effective American missiles, Japan would be able to placate the U.S. arms industry. This would be a better way to spend tax revenues than throwing money at a missile defense system whose efficacy is questionable at best.

Fielding a military capable of striking enemy bases will make Japan an equal risk holder with the U.S. during a crisis -- a position that will eventually win the American public's support. If, on the other hand, Tokyo tries to avoid such a role and depend totally on the U.S. when under attack, the American public will be enraged. Most Americans are not even aware of Japan's strictly defensive policy.

If Japan had recognized the limits of the aforementioned missile defense in 2017, when North Korea test-fired a number of ballistic missiles, and had spent the subsequent three years on other options, the country would now have an effective -- if limited -- capability to strike enemy bases. The country could also have significantly upgraded civil defenses to evacuate citizens in the event of a missile attack.

The government now must identify the reasons for the "lost three years" and address the problems.