Observers ask if the monarchy's reemergence can foster true democracy 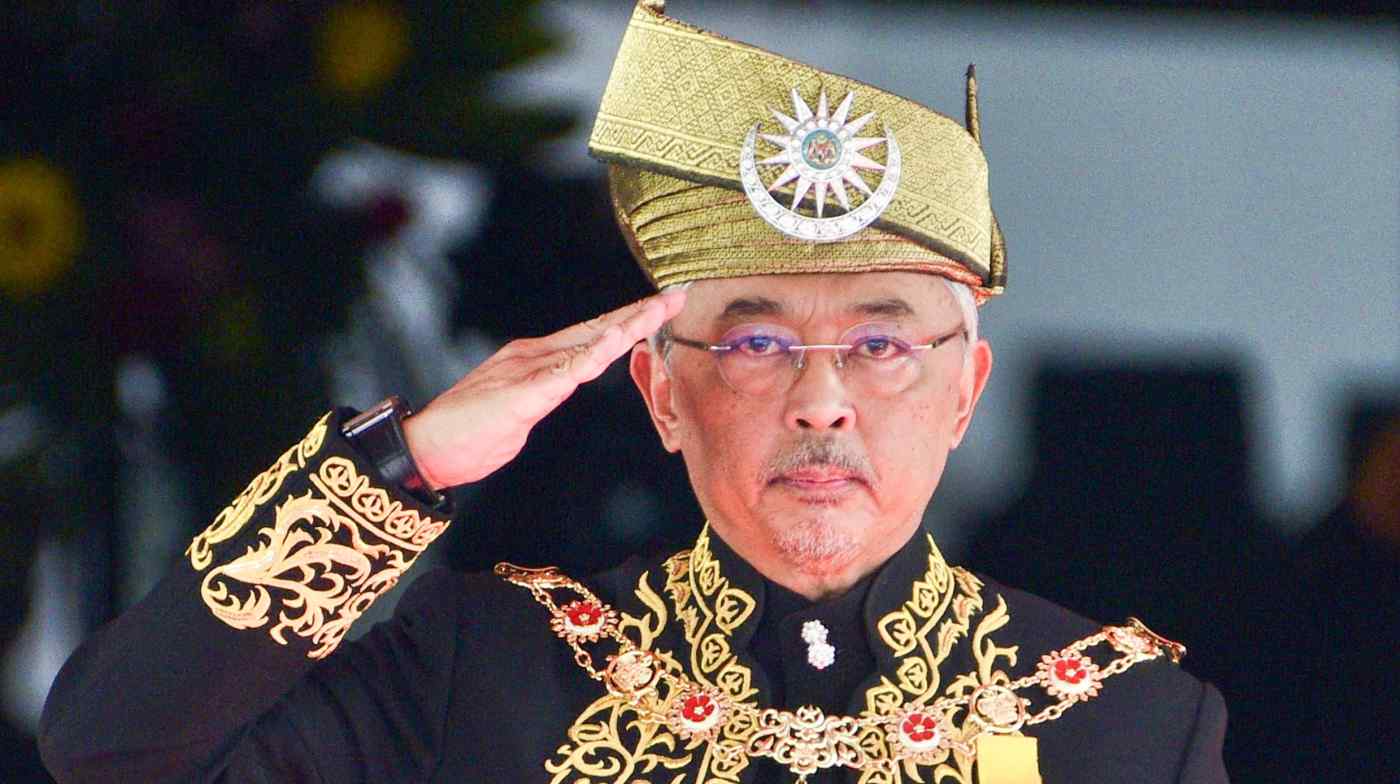 King Sultan Abdullah Sultan Ahmad Shah called for an end to political bickering to shield the country from the COVID-19 pandemic.

Prime Minister Ismail Sabri Yaakob, who took office only 10 days earlier, said this year's ceremony should be Malaysia's last pandemic-stricken National Day in a televised speech on Aug. 30. But he was forced to attend the ceremony online after suspected close contact with a COVID-19 patient.

Malaysians confirmed with COVID-19 infections have continued to tally as high as 20,000 each day, and the country was bottom of Bloomberg's COVID Resilience Ranking of 53 economies in August. This rolling crisis has highlighted political dysfunction but also raised the profile of the royal family.

Prime Minister Muhyiddin Yassin rocked Malaysian politics on Aug. 16 by resigning after he lost majority support in parliament amid fractiousness in the fragile ruling coalition.

Yassin's departure created the risk of a political vacuum while governing and opposition parties counted numbers to find a successor, but the king quickly moved to stabilize the situation. 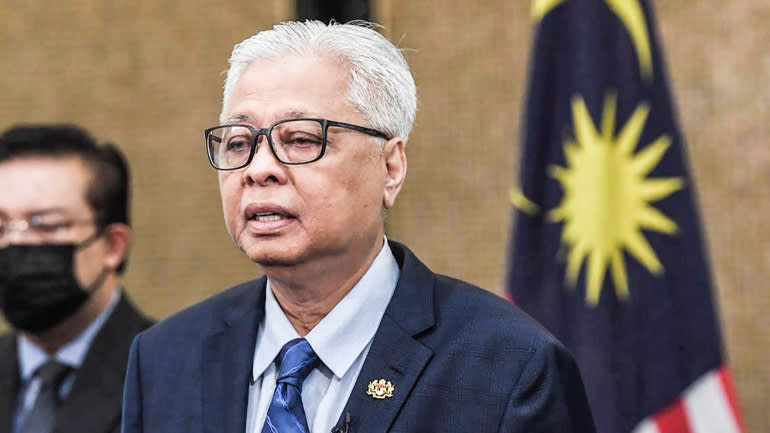 On Aug. 17, King Abdullah called the leaders of major political parties to the palace and ordered all 220 members of the lower house to submit in writing the names of their chosen candidates. The following day, the king met individually with the 114 members who supported Ismail Sabri Yaakob of the United Malays National Organization (UMNO).

The next day, Ismail Sabri was appointed as new prime minister after a meeting of all nine sultans. He was sworn into office as Malaysia's ninth prime minister on Aug. 21, reducing the political vacuum to a minimum.

King Abdullah has become much more noticeable in recent years. When Dr Mahathir bin Mohamad resigned as prime minister in February 2020 because of feuding in the ruling coalition, the king listened to all sides and picked Muhyiddin as his successor on the grounds that he had majority support among lawmakers.

When Deputy Prime Minister Anwar Ibrahim tried to change the prime minister in October, the king rejected the proposal because of the absence of evidence that the change was supported by a parliamentary majority.

Malaysia's constitution stipulates that the king appoints an elected member of parliament as prime minister if he is deemed to have the backing of the majority of lower house members. That apparently simple calculation can stoke heated controversy, however.

Unlike Japan or Thailand, Malaysia has no parliamentary mechanism for choosing a prime minister but takes its lead from its former colonial master, the United Kingdom, where the monarch invites the evidently strongest party leader to form a government. A prospective prime minister "being deemed winning the confidence" of lawmakers by the king emerges after a general election or a change of leadership during a parliamentary term. Dr Mahathir bin Mohamad called for "modernization of the constitutional monarchy" and circumscribed royal authority after he first became  prime minister in 1981.    © Reuters

That monopoly expired in 2018 when a viable government was achieved by an alliance between Anwar, Mahathir and Muhyiddin, who had all bolted the UMNO fold, and other opposition elements.

But the new coalition was unstable, and both Mahathir and Muhyiddin were forced to resign the premiership within two years. King Abdullah has come to play an impartial mediating role that best reflects the opinions and wishes of the people.

The monarch's role used to be considered much more symbolic and ceremonial. Historically, the Malay Peninsula comprised small kingdoms ruled by sultans. Even when British colonials ruled from the late 18th to mid-20th century, the sultans remained in place. Malaysia opted for a constitutional monarchy when it attained independence. The 13-state country adopted a system in which the king would be chosen from among the sultans of nine states for a five-year term. This kind of rotating monarchy is unique to Malaysia.

The roles of the king and the sultans were relegated when Mahathir pushed ahead with reforms after he first became prime minister in 1981. Measures were taken to curb royal powers after elected state prime ministers were sacked summarily, royal businesses chalked up indecent profits, and a number of violent incidents occurred.

Mahathir amended the constitution in 1983 to restrict royal legislative power, and to abolish legal immunity in 1993.

Sultan Ahmad Shah, King Abdullah's father, reigned from 1979 to 1984 and was the first to appoint Mahathir prime minister. The pair clashed fiercely over constitutional amendments, so there is a certain historical irony in King Abdullah quelling political bickering that has grown more evident since Mahathir's unforeseen return to the premiership in 2018.

Does this in any way reverse Mahathir's efforts historically to modernize the monarchy?

Masashi Nakamura, a researcher with the Institute of Developing Economies at the Japan External Trade Organization, believes the current situation has more to do with "the government's abuse of the monarch than political intervention" by the king. 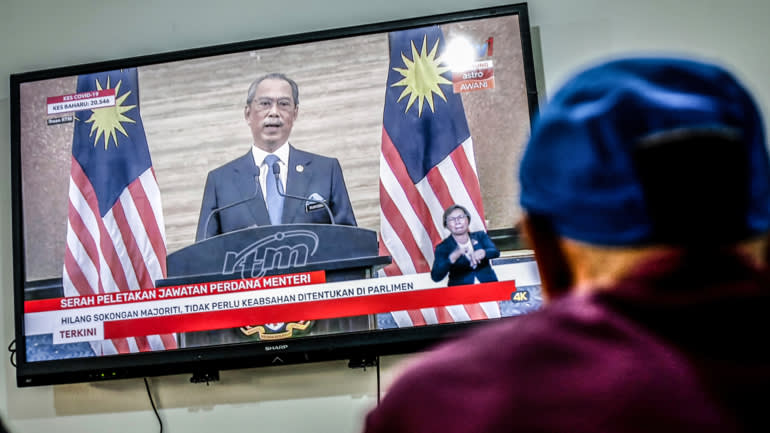 Former Prime Minister Muhyiddin Yassin publicly urged King Abdullah to declare a state of emergency to curb the COVID-19 pandemic, but many saw it as a ploy to conceal political weakness.    © AP

Muhyiddin asked King Abdullah to declare a state of emergency during the COVID-19 pandemic, resorting for the first time to a constitutional clause added in 1983. King Abdullah rejected the recommendation in October last year, but accepted this January when infections began to surge.

Muhyiddin's political base was weak, and some saw his resort to the king as a way to avoid a no-confidence motion and postpone a general election. Parliament was duly closed and his premiership continued. But the state of emergency failed to contain the coronavirus, and the king said in June that the parliament should reopen ahead of the declaration's expiry. With his grip on power slipping, Muhyiddin stepped down.

In nominating Ismail Sabri as Muhyiddin's successor, King Abdullah urged an unprecedented vote of confidence in the new prime minister in the next parliamentary session. He may have hoped to avoid a repeat of the political confusion surrounding the nomination of Muhyiddin based on how lawmakers expressed their intentions at that time. By calling for the reopening of parliament, and requiring explicitly stated support for the new prime minister, some saw the king as acting more decisively to protect democratic values than the government.

Muhamad Takiyuddin, an associate professor at the National University of Malaysia, expects unprecedented developments in Malaysian politics this decade. "The monarchy will continue to play a significant role, especially in these trying times," he said. 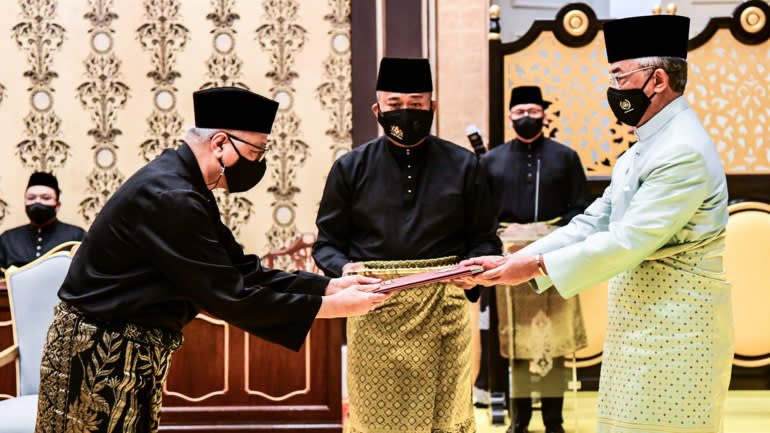 Malaysia's changing political currents were not mapped out ahead, however, and most of King Abdullah's recent actions have been reactive to circumstances. Indeed, he was not even slated to accede until December 2021, but did so in January 2019 when his predecessor, Sultan Muhammad V, abdicated for personal reasons.

King Abdullah appears to have a popular touch and genuine respect for democratic principles, but will this be sustainable when a different personality ascends the throne? In neighboring Thailand, the late King Bhumibol Adulyadej overcame a number of political crises during his 70-year reign that earned him considerable public reverence. But his son, King Maha Vajiralongkorn, who succeeded in 2016, has run into from more criticism, particularly among younger Thais who want to see his role more strongly bridled by the constitution.

With this latest change of government, Malaysia is edging towards more genuine democracy, in which political parties compete and the old one-party dictatorship is checked. The intense jockeying for power and clashes may be the birth pains of truer democracy, but the concern for now should be whether the reliance on King Abdullah's good offices to find ways forward is systemically sustainable.