Malaysia's ex-PM Mahathir gears up for one last fight 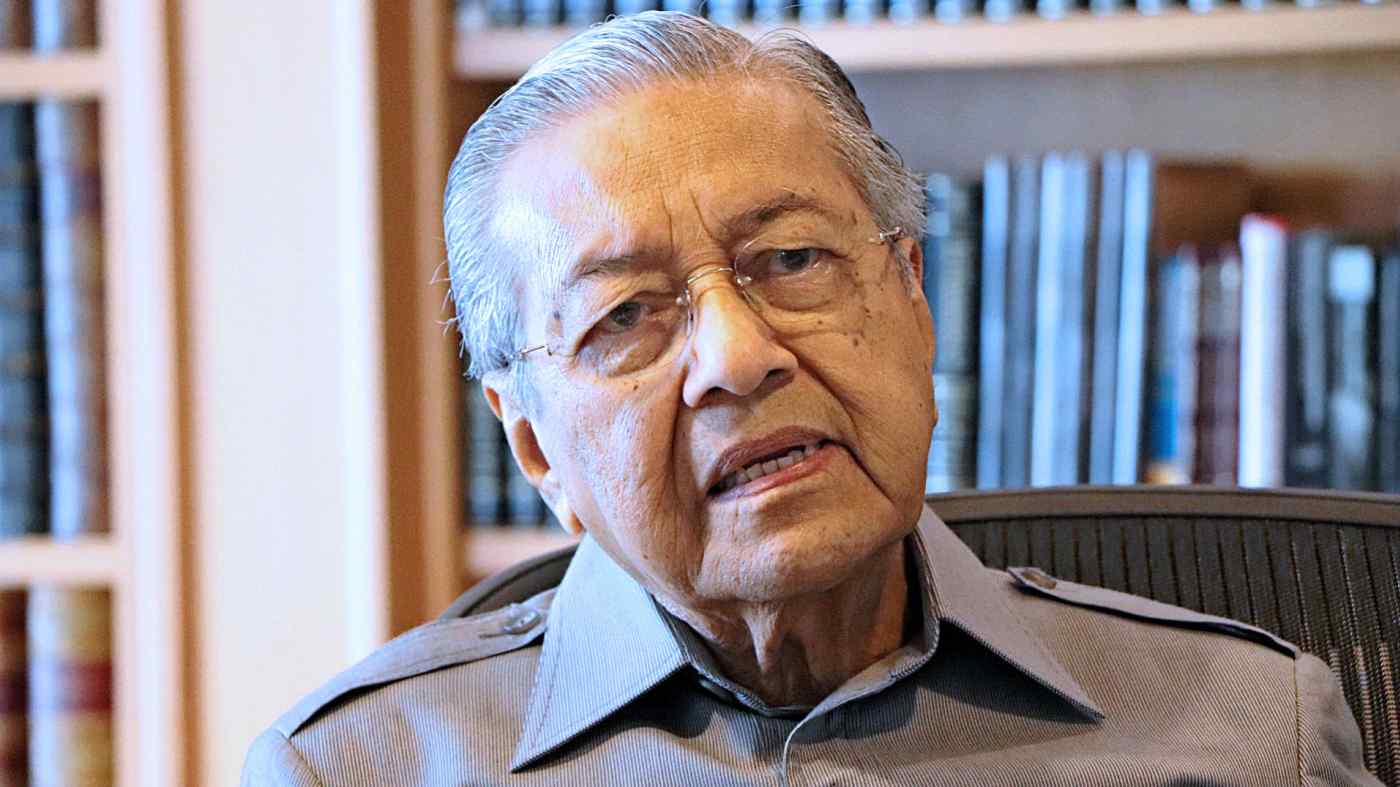 BANGKOK -- Dr. M, a nickname for former Malaysian Prime Minister Mahathir Mohamad, is once again making headlines in local media, which in recent weeks has been dominated by news about the novel coronavirus pandemic.

The Malaysian government on May 4 eased its seven-week lockdown and reopened its economy. Mahathir launched his latest political gambit as if he had been waiting for this moment.

On May 9, Mahathir and Anwar Ibrahim, his longtime political rival and former deputy prime minister, issued a joint statement pledging to work together to topple Muhyiddin Yassin's government.

"Knowing this situation, we don't acknowledge this government of the day. Our principle has been clear from the first day this government was formed -- that it stands without the people's mandate," the statement said.

Mahathir had planned to submit a no-confidence motion to parliament, which convened on May 18, but the prime minister preempted the move by ordering the speaker of the lower house to adjourn the parliament following King Abdullah's address, citing the need to tackle the coronavirus first. The parliamentary session ended in just 30 minutes that day. Debate on the no-confidence vote was postponed until at least mid-July, when parliament reopens.

As of the end of May, Malaysia had reported 7,819 coronavirus cases and 115 deaths. Muhyiddin announced a nationwide lockdown in mid-March, just a week after he launched his government, to prevent an explosion of infections.

According to a recent survey conducted by British pollster YouGov in 26 countries and territories, Malaysia's government ranked second highest in public confidence, at 93%, behind only Vietnam. Why, then, is Mahathir fiercely criticizing it?

Mahathir ousted Najib Razak from power, defeating Najib's ruling United Malays National Organization in the 2018 general election. In that effort, he partnered with Anwar. Mahathir, who was 92 at the time, had returned to the prime ministership for the first time in 15 years, promising to hand the reins to Anwar within two years. 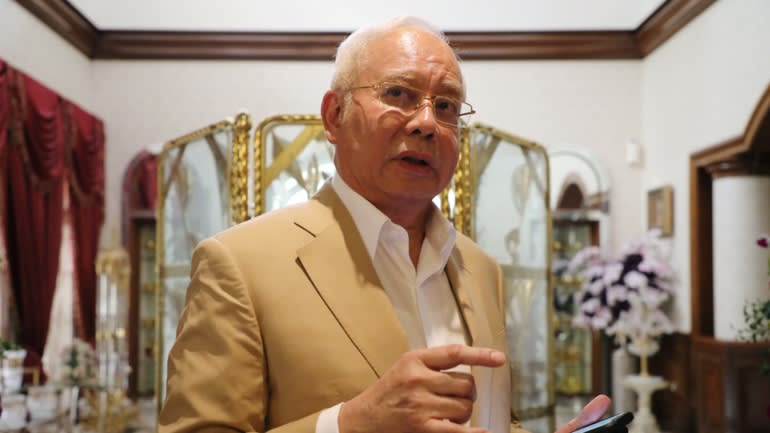 Malaysia's former Prime Minister Najib Razak was ousted in the wake of the 1MDB scandal, in which he was accused of embezzling from the sovereign wealth fund.   © Reuters

But Mahathir never provided a clear time frame for the handover, sparking a backlash within the ruling coalition. Muhyiddin, Mahathir's right-hand man, seized his chance to oust Anwar. In late February, he asked the king to reshuffle the coalition by bringing UMNO into the ruling camp.

Mahathir, who did not want to partner with his former party, stepped down as prime minister. But the surprise move, aimed at resolving a quarrel within the ruling party and seizing power again, backfired and left Muhyiddin in control.

Amid the confusion, the king, who has the authority to nominate prime minister, convened a meeting of all lawmakers and named Muhyiddin, saying he had obtained majority support. Mahathir insisted that he held the majority, but he lost that fight and failed to regain the premiership. According to local media reports, the two sides are tussling behind the scenes to gain a majority in the lower house before the parliament resumes in July.

Mahathir, who will turn 95 in July, remains optimistic. This is his third attempt to oust a prime minister.

Malaysia's fourth prime minister since independence, Mahathir led the country from 1981 to 2003, nominated his then-deputy Abdullah Badawi as his successor in 2003. Dubbed "Mr. Clean," Abdullah froze the Johor-Singapore Causeway replacement project begun by the previous government as part of an anticorruption drive aimed at doing away with wasteful public works projects. But that only earned him his predecessor's resentment.

After the UMNO lost seats in the 2008 general election, Mahathir demanded Abdullah's resignation. The following year, Abdullah was forced to step down, and Najib, who has an impressive political pedigree, succeeded him. He is the eldest son of Abdul Razak, the country's second prime minister, and a nephew of Hussein Onn, its third.

But a feud between Mahathir and Najib had been brewing for some time. After coming to power, Najib tried to revise the Bumiputra policy, an affirmative action program promoted by Mahathir that was aimed at helping ethnic Malays. Najib also refused to provide financial aid to Proton, a struggling Malaysian carmaker that Mahathir long championed. Najib sold a 49% stake to a Chinese automaker, in effect, washing the government's hands of the project.

These were clear snubs for Mahathir, who sought revenge by highlighting accusations that Najib had siphoned billions of dollars from a sovereign wealth fund, 1Malaysia Development Berhad, or 1MDB. The scandal came to light in 2015. Many political observers say 1MBD was the death blow for Najib's political career.

If Mahathir's succeeds in ousting his latest nemesis, Muhyiddin, what will he do next? In a March interview with Nikkei, Mahathir said it would be selfish of him to retire because he is still a member of parliament, adding, "I feel I have a duty to do something."

But Masashi Nakamura, deputy director-general of the Area Studies Center at the Institute of Developing Economies, a Japanese think tank, is skeptical that Mahathir has a well-defined policy agenda. His second tenure as prime minister was dominated by moves to roll back Najib's policies, such as repealing the consumption tax and reviewing some infrastructure projects, Nakamura said, adding, "I cannot perceive any clear policy vision in his political narrative." Anwar Ibrahim, Mahathir's rival and one-time deputy, has been waiting to step out of Mahathir's shadow for decades.   © Reuters

When Mahathir promised to yield the prime ministership in two years, after coming to power for the second time in 2018, his age may have been a factor. But one goal remains elusive: seeing Malaysia achieve developed nation status by 2020. Mahathir may still hope to realize his "Vision 2020" plan announced in 1991 while in office.

But Malaysia's slumping economy has forced him to push back the target year to 2024, potentially robbing Mahathir of his chance to retire from politics on a high note.

Muhamad Takiyuddin, a political scientist at the National University of Malaysia, remarked: "We still respect him as a statesman. However, he is now regarded as a hero-to-zero type. He was the one who resigned, and now he wants his mandate back."

Mahathir's political life will surely come to an end if he fails to oust Muhyiddin. Even if he succeeds, his relationship with Anwar will no doubt be strained again. The question of when he will finally step aside for Anwar will eventually have to be answered.

Such a power struggle, driven by personal ambition, may further hobble the country's recovery from the pandemic. It is unclear whether Mahathir, a longtime political luminary in Asia, will shine again or fade out in his twilight years.