Anti-coup protesters confront police forces in Yangon. The future of the Myanmar economy is uncertain with the possibility of sanctions being reimposed by the U.S and Europe.   © Reuters
RYUSHIRO KODAIRA, Nikkei senior staff writerFebruary 15, 2021 16:58 JST | Myanmar
CopyCopied

TOKYO -- The power grab by the Myanmar military has cast a pall over the future of the country, once dubbed "Asia's last frontier" by foreign companies and investors. What transpired is a reminder of the potentially huge risks for investment in Myanmar and other parts of Southeast Asia.

One is the deeply divided world. The U.S. has strongly condemned the coup, going so far as to impose sanctions on military leaders and three military-affiliated companies. This feeling has been echoed by leaders in the European Union, who have bitterly denounced the takeover.

In contrast, China, which has close ties with Myanmar's military, has remained silent while the Association of Southeast Asian Nations has stuck to its policy of not interfering in the internal affairs of members. Indeed, the 10-member bloc has only issued a tepid statement, saying it has "been closely following the current developments."

The question is which camp -- Western democracies or emerging Asian nations -- will have a greater influence on Myanmar.

People in democratic industrial nations tend to feel that economic activities should be tied to human rights. But many other countries feel otherwise, and their economic influence is growing. The coup has provided evidence of this harsh reality. 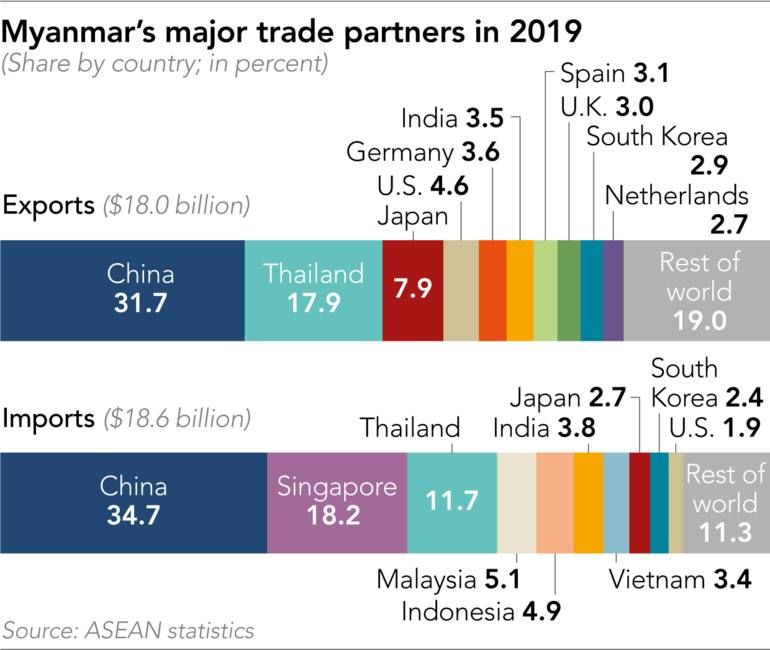 In the 1990s when Myanmar was ruled by a military junta, industrial nations pressured the country with economic sanctions. Their collective actions helped drive Myanmar's transition to a civilian government in 2011.

Since then the world economy has changed dramatically, as the combined presence of emerging Asian nations -- including China -- has grown sharply. The economic output of the Group of Seven major industrial nations, which includes the U.S., Japan and major European nations, has declined from 65% in 2000 to 45% in 2020, while that of emerging Asia, of which China and ASEAN are a part, rose from 7% to 25%.

Myanmar's largest trading partner is China, which accounted for 33.2% of the country's $36.6 billion trade in goods in 2019. China and four major ASEAN members, including Thailand and Indonesia, provide Myanmar with more than two-thirds of its trade. Meanwhile, the EU, Japan and the U.S. account for just 11.5%, 5.3% and 3.2%, respectively.

This means these democracies have less economic leverage on Myanmar via trade actions than before.

The second risk for companies revealed by the coup is the possibility of getting embroiled in human rights controversies, which could have serious implications for reputations concerning environmental, social, and governance standards.

Myanmar has been criticized by ESG investors and human rights groups because of its brutal suppression of the Rohingya, a Muslim ethnic minority group. Japan's Kirin Holdings has decided to end its two joint beer ventures in Myanmar, which have been suspected by the U.N. and human rights groups of funneling funds to the military. Some groups have even called for boycotting Kirin.

The beverage company announced its decision on Feb. 5, saying the military's actions were "against our standards and human rights policy." Japan's Kirin Holdings announced on Feb. 5 that it will terminate its two joint beer ventures which are co-owned with MEHL, a Myanmar military-affiliated company. (Photo courtesy of Kirin)

In Myanmar, Thailand and other Asian nations where industries have strong ties to the military, companies from industrial nations can unwittingly become involved in human rights violations, such as violent crackdowns on pro-democracy movements and ethnic minorities.

Foreign companies in the region are under growing pressure to monitor money flows and labor conditions at their local units and suppliers.

The Corporate Human Rights Benchmark, a joint effort by institutional investors and human rights groups, has become the first public measure of corporate human rights performance. Some of the investors involved in this project include APG Asset Management and Aviva Investors.

The CHRB uses a number of criteria, such as how strongly management is committed to human rights policies, the effectiveness of systems to uncover human rights abuses, and whether they have easily accessible systems for workers to seek counsel.

Among Asian companies, Fast Retailing, operator of Japanese casual clothing brand Uniqlo, scored 19.5 out of a possible 26 in the 2020 rankings, while South Korean electronics giant Samsung Electronics was rated at 14.0. But several Asian companies fared badly, earning scores as low as 0 and 1.

Fast Retailing's admirable performance came as no surprise given its efforts to improve the transparency of its supply chain. The company regularly publishes lists of sewing factories that work for Uniqlo and its other Asian brands, and plans to list all contracted factories by March 2022.

Janine Guillot, chief executive of the Sustainability Accounting Standards Board, a U.S.-based nonprofit that sets standards for the disclosure of sustainability information, says "human capital" in supply chains will be the next important issue after climate change. 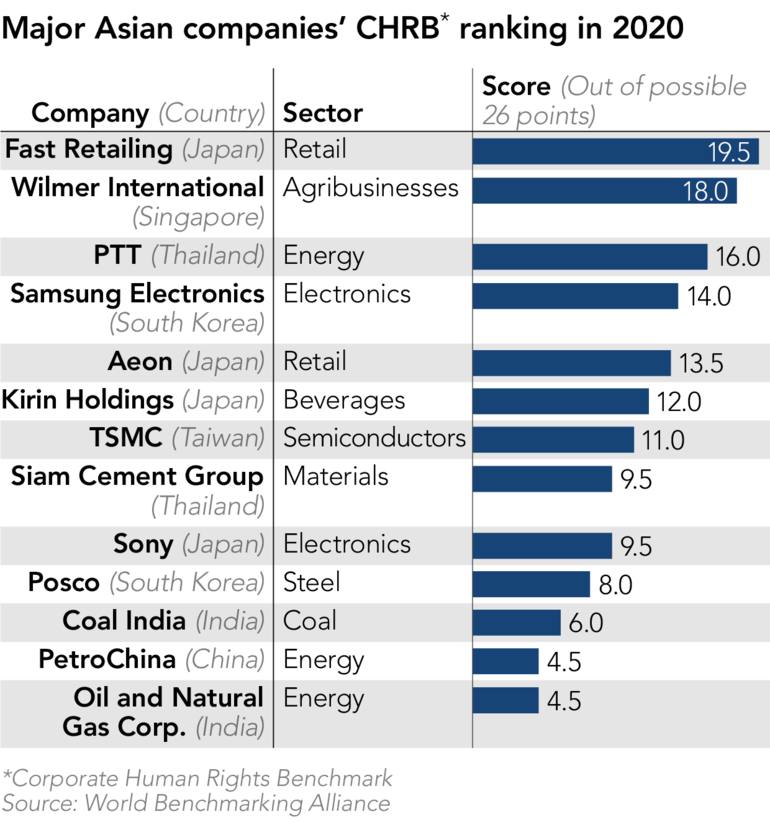