TOKYO -- As Myanmar is roiled by protests against its recent military coup, Western countries are faced with two seemingly contradictory challenges.

One is to mount pressure on the junta and show that military rule in Myanmar will never be tolerated. The other is to avoid isolating the country to the extent that it is driven into the arms of China.

It is not impossible to achieve both of these goals, and at least for now, the administration of U.S. President Joe Biden is seemingly attempting to do just that. It has leveled new sanctions on Myanmar military leaders, but it waited about 10 days from the coup to do so.

There are indications that the Biden administration may have sent several signals to the Myanmar military behind the scenes. Washington made its position clear to the junta through Japan and India, which have channels of communication with the military, and repeatedly urged it to reverse the coup, according to a U.S. government source.

While showing a very tough stance on the Myanmar military, Biden also recognizes the risk that Myanmar may turn to China if pressed too hard. According to a diplomatic source with knowledge of the U.S. administration's position, Biden limited the scope of the first round of sanctions to mainly military leaders, due to such considerations.

Myanmar sits between China and India and faces the Indian Ocean. As its strategic competition with China escalates, the U.S. does not want to see this geopolitically important Southeast Asian nation fall under Beijing's sway. Protesters against the Myanmar coup call for U.S. support outside the American Embassy in Yangon on Feb. 16.   © Reuters

Of course, the situation may change. If the protests result in a large number of deaths, the U.S. may be forced to step up its sanctions.

The Myanmar crisis has confronted the international community with a question that is old but new: When democratic values clash with geopolitical interests, which side should take precedence? Here, it is important to realize that human-rights-based diplomacy comes dressed as justice, but it is no stranger to hypocrisy and double standards.

The U.S. has long treated absolute monarchy Saudi Arabia as an ally and provided it with advanced weapons. In a strategy to keep China in check, it has increased military exchanges with Vietnam, a one-party Communist state. Reluctant to expose American soldiers to the risk of prosecution, the U.S. is not a member state of the International Criminal Court.

That is not to say the international community should quietly condone the coup in Myanmar. The U.S. is right to impose sanctions on the Myanmar military as a check against the rise of authoritarianism. Japan and Europe should work closely with the Biden administration in this effort and put stronger pressure on the Myanmar military. But this action should be done with a measure of humility over the lack of an ironclad justification.

Unfortunately, what impact sanctions will have remains to be seen. China accounted for more than 30% of Myanmar's trade in 2019, making Myanmar one of the Southeast Asian nations most dependent on their giant neighbor to the north, according to the Japan External Trade Organization.

This reliance is a product of the Western sanctions on the military governments that ruled Myanmar until 2010. Fresh sanctions could allow China's influence to increase even further.

From a longer perspective, the situation is not hopeless. That is because none of the members of the Association of Southeast Asian Nations is willing to be dominated by China. This includes Myanmar.

So what kind of prescription is possible for the international community? There are no miracle solutions in the short term, but over the longer term, there is cause for hope. This is because no ASEAN country, including authoritarian states, wants to be China's client.

An Asian government official who has channels of communication with Myanmar's military said that in private conversations, top officers have admitted to being "very wary of Chinese influence permeating the country."

China openly supported the Communist Party of Burma, an armed anti-government group, from the 1960s to the mid-1970s The Myanmar military's resentment at such interference still lingers.

Other authoritarian governments are not necessarily pro-China, either. Vietnam takes a notably hard-line stance on China because of their maritime dispute. Thailand, whose government is led by a former general and junta leader, co-hosts the largest multilateral military drill in Southeast Asia with the U.S. almost every year. 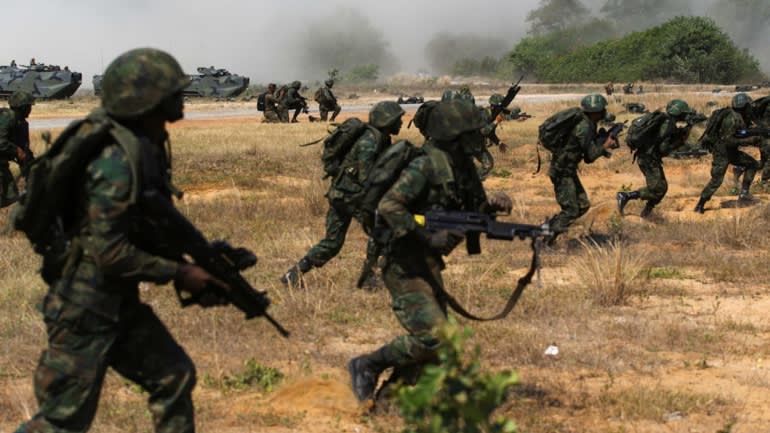 Thai Marines participate in a Cobra Gold joint military exercise with the U.S. at a military base in Thailand's Chonburi Province.   © Reuters

Even Cambodia, which is considered to be the most China-leaning ASEAN member, canceled a joint military drill with China planned for this March. The official reason was given as coping with the coronavirus pandemic, but some observers say Cambodia wanted to avoid irritating the Biden administration.

"The idea that autocratic regimes generally get close to China is an ideological idea, not an empirical idea," says Bilahari Kausikan, former permanent secretary of Singapore's Ministry of Foreign Affairs. "If autocratic regimes get close to China, it is primarily because the West (U.S. and Europe) shuns them and pressures other countries like Japan to follow suit, giving them no other alternative."

From such a viewpoint, a possible response for the U.S., Europe and Japan emerges. Sanctions should be strong enough to make the military pay a sufficient price for the coup, while stopping short of an economic blockade for now. At the same time, Western nations and Japan should help Southeast Asian countries to build the necessary capacities to counter China's influence.

"It is vital to provide more economic and diplomatic options to ASEAN countries to reduce their dependence on China," Kausikan said. "This is particularly important to the Mekong riparian states and the less developed ASEAN members who have claims in the South China Sea."

China has approached Southeast Asian countries with proposals for cooperation to try to establish itself as a leading force in flood control and development in the Mekong uplands. In the South China Sea, it is increasing military pressure and is trying to agree on a code of conduct with the ASEAN side on Beijing's terms.

Japan and the U.S. are involved in providing development assistance in the Mekong region, but their engagements are not deep enough to neutralize China's. They need to strike the right balance by controlling the level of sanctions on Myanmar, while not taking their foot completely off the accelerator of cooperation.