For long-term prosperity, capitalism must spread its opportunities

TOKYO -- Overseas money is pouring into India as stock prices surge along with hopes for Prime Minister Narendra Modi's aggressive reforms. But one has to wonder -- are global investors wearing blinkers as they race into the country? Do they not see the poverty, public health hazards and safety concerns that the nation of 1.3 billion people faces?

When the late Lee Kuan Yew took a look 10 years ago, Singapore's founding father was forced to admit that while he had led one country, he would be unable to govern India. After Gujarat setback, Modi to redouble effort to win back voters

India's dark side remains vast. Nevertheless, the country's benchmark Sensex index has risen more than 25% since the beginning of 2017, outpacing other big indexes around the world. According to Lipper, a Thomson Reuters research unit, mutual funds investing mainly in Indian stocks had inflows totaling $48.1 billion in the first 11 months of this year. The full-year figure is expected to reach its highest point since the country's net money inflow turned to positive in 2014.

So far, the global tide of investment cash has been attracted by three big once-in-decades reforms that Modi has managed to pull off. The first reform came in November 2016, when Modi abruptly announced that all 500- (nearly $8) and 1,000-rupee bank notes, or 86% of all paper money in circulation at the time, were to be scrapped. The move was aimed at black market transactions but it also encouraged Indian shoppers to use noncash methods of buying stuff. According to one estimate, this helped increase the number of point-of-sale terminals used at shops by nearly 40% over the past year.

The second reform was the introduction of the country's first national bankruptcy law, which speeds procedures for dealing with insolvent companies. Mounting bad loans have been a significant threat to the country's banking system. Bad debts as a share of total lending in the country doubled over the two years through 2016 to 9.2%.

The third reform, introduced in July, was the goods and services tax, which unifies taxation and does away with myriad state levies. The move is expected to ease the burden of complying with tax procedures and promote the smooth transfer of goods across states, reducing the number of bribes paid to get around complicated rules.

These reforms have caused some pain, dampening consumer sentiment, but over the longer term they are expected to make the economy more productive. In November, U.S. ratings agency Moody's Investors Service raised India's sovereign bond rating to Baa2 from Baa3, citing hopes that Modi's reforms that may, "over time, enhance India's high growth potential," although the effects are still unclear.

Amid all the cheer looms the question of whether people are fully aware of the downside risks in India. There are reasons for skepticism, and the mood is similar to 10 years ago, when the investor craze over the BRIC -- Brazil, Russia, India and China -- economies was in full swing.

In 2007, JPMorgan Chase held a three-day internal meeting in New Delhi, inviting top management at the U.S. investment bank and outside advisers such as former Singaporean Prime Minister Lee.

"You're just seeing the positive side of 10 million people, among the over 1 billion Indian population," said one guest speaker, a specialist on India. This person spoke of deep-rooted and widespread social problems in the country, such as poverty and the wealth gap between urban and rural citizens. His comment elicited Lee's admission that he did not think he could govern India. 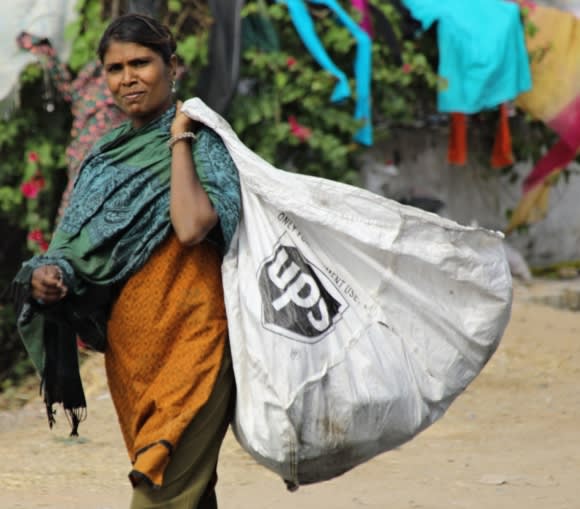 India is an emerging superpower full of social problems. Brokerages hardly touch on these in their reports to investors. And the global financial community might only be looking at the bright side.

Two years ago, I took part in a study on toilets in India. The study found that only half of the population had access to a toilet at home. The rest defecate in the open, keeping an eye out for snakes, scorpions or even human assailants. One housewife surveyed said she had become sick from repeatedly refraining from going outside to defecate.

According to a 2014 study conducted by organizations including the Japan International Cooperation Agency, 26% of women who used open-air latrines reported being ridiculed, or experiencing near or actual sexual assault.

In addition, bad sanitation kills many Indian children due to diarrhea caused by eating vegetables contaminated with human waste. Traditionally, night soil is collected by Dalits, people formerly known as "untouchables" who are at the bottom of India's caste system. This entrenched social structure is one reason why the modernization of India's sanitation system has been so slow.

The lack of toilets symbolizes the myriad problems of poverty, public health, widespread discrimination and violence against women. It points to fragile social foundations. Modi eagerly campaigns on his "Make in India" initiative, but how many businesses are willing to move into an area where there are not enough toilets?

There is an encouraging sign -- the emergence of startups focused on social responsibility. "Impact investing," that is, socially responsible, purpose-driven finance, has grown in India for three straight years, reaching about $1.1 billion in 2016, according to U.S. consultancy McKinsey & Co. That is equal to around 5% of the global total, larger than India's share of worldwide gross domestic product, which comes to about 3%. Ahmedabad is the largest city in the western state of Gujarat. There, homeless people, perhaps farmers from poor villages, make a living collecting garbage. On the outskirts of the city, vast piles of refuse cause serious pollution.

Nationwide, there are thought to be 2 million waste-pickers. One recycling startup founded in 2011, Nepra Resource Management, is trying to tackle the garbage problem in Ahmedabad while improving the lives of the city's waste-pickers. In contrast to some recyclers, which buy refuse from pickers as cheaply as possible, Nepra uses a smartphone app that determines the purchase price based on the weight and type of materials being sold. In addition to buying recyclables at fair prices, the startup has opened a sorting plant.

In 2013, Aavishkaar Venture Management Services, one of India's top social-impact investors, bought a stake in Nepra. Overall, Aavishkaar has spent over $200 million on more than 50 social businesses.

Nepra has expanded beyond Ahmedabad and hopes to list its shares on the stock market, possibly in three years. Its business model demonstrates the virtues of a company dealing with social problems, while its shareholders benefit from the effort.

Given the array of challenges India faces, it has enormous potential to become a center of socially minded business, making "social" the key element of its effort to create an economy driven by sustainable capitalism. Global investors should focus on whether Modi can succeed in transforming India's disadvantages into advantages. The country's long-term prosperity depends on it.