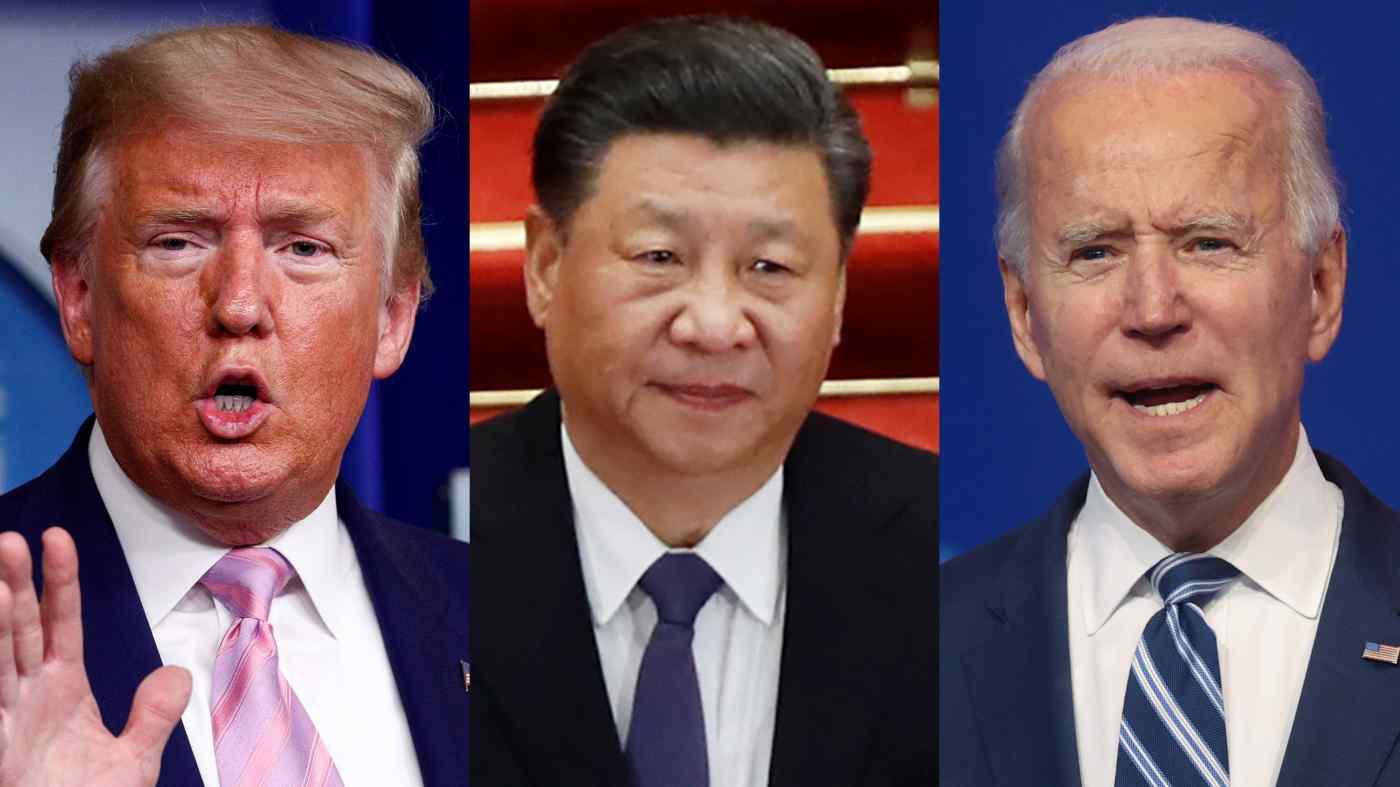 The contentious U.S. presidential election should be an opportunity to demonstrate how democracy is still superior to authoritarianism, as practiced in China and elsewhere. (Source photos by Reuters)
HIROYUKI AKITA, Nikkei commentatorNovember 12, 2020 01:34 JST | North America
CopyCopied

TOKYO -- The 2020 U.S. presidential election should have ended with Joe Biden's declaration of victory. But incumbent Donald Trump has refused to concede and is mounting a legal challenge.

Although it is unlikely the election result will be overturned, the damage to trust in the U.S. electoral process has been done. Democracies in Asia and the rest of the world cannot dismiss what is happening in the U.S. as someone else's problem.

Does this mean that democracy is on the decline? China has made statements to that effect, taking advantage of the messy outcome of U.S. voting.

Intellectuals who worship the U.S. and exaggerate the capacity of the American political system have been proven wrong, a media outlet affiliated with China's state-run Xinhua News Agency opined, adding that the U.S. would not return to the position of global leader.

Ta Kung Pao, a pro-Beijing newspaper in Hong Kong, described the U.S. electoral process as not a model of democracy but one of ugliness, and that it has become a global laughingstock.

On Weibo, the Chinese version of Twitter, messages about the U.S. presidential election had been accessed 7 billion times as of Nov. 5, revealing the extent of interest in face-off between Trump and Biden supporters.

China has contained its coronavirus outbreak and achieved an economic recovery faster than the U.S., European countries and Japan. On the back of these achievements, China is stepping up propaganda against democracy.

Unlike Russia, which tries to capitalize on social unrest in the U.S., China's propaganda machine in the past would mainly boast of the superiority of Chinese Communist Party governance. Since the outbreak of the coronavirus crisis, however, China has also begun to disseminate fake information and conspiracy theories through the internet and other channels to damage trust in U.S. politics, according to American intelligence experts.

Russia has piled on, with Maria Zakharova, chief spokesperson of the Foreign Ministry, saying the U.S. presidential election has exposed "obvious shortcomings" in the American electoral system.

Putting aside self-serving Chinese and Russian propaganda, it is important to take the U.S. presidential election as an opportunity to consider how democracy can maintain its superiority over authoritarianism as practiced in China and elsewhere.

There is no denying that the Chinese model may produce faster results because the leadership can quickly make and implement decisions. It can work out long-term strategies without worrying about the next election.

Thus, Chinese President Xi Jinping adopted a target in October of raising China's per capita gross domestic product to that of a "midlevel advanced country" by 2035.

But in no way does that make the Chinese model superior to democratic governance. The latter has decisive advantages unavailable under authoritarian governments.

First, leaders' policies and decisions are exposed to constant public scrutiny and criticism. Leaders who do not measure up to voter expectations will eventually be replaced through elections. Voters fill out ballots during early voting in the Brooklyn borough of New York. What is happening in the U.S. is not chaos but a show of the democratic process itself.   © Reuters

What is happening in the U.S. is not chaos but the democratic process itself. By contrast, authoritarian governments run the risk of blundering ahead with flawed national policies that cannot be changed even if a leader is wrong.

"There is no close aide who can give unvarnished advice to Xi," said a Japanese government official who analyzes the workings of the Chinese Communist Party. "Correct information on how his heavy-handed policies have created tensions may not be reaching him."

The second advantage of democracy is that social friction forces a state to look squarely at its problems and make changes to its laws and institutions. In a country guaranteeing the freedom of expression, confrontations between people and discontent with the government naturally surface at times, as they are now in the U.S.

Needless to say, these confrontations can erupt as violence. In the U.S., it took the Civil War and the clashes of the civil rights movement of the 1950s and 1960s to reduce racial discrimination. In 2008, Americans elected their first Black president.

China's racial problems are much more serious. In the Xinjiang Uyghur Autonomous Region, some 1 million Uighurs are detained in camps for political re-education, according to Western governments. China has also suppressed Tibetan freedom of assembly and speech.

"Authoritarian systems can make quick decisions and pursue them relentlessly over the long term," said Bilahari Kausikan, a former permanent secretary of Singapore's Ministry of Foreign Affairs and well-known commentator on international affairs. "This is a great advantage provided it is a correct decision."

But there is no guarantee of such an advantage because "an authoritarian leader is accountable to no one," he said. "The consequences of a bad decision can therefore be disastrous" as no one dares to tell the leader that the decision was bad and should be stopped.

In China, Deng Xiaoping's policy of opening-up and reform policy was a good decision, while bad ones were Mao Zedong's Great Leap Forward and Cultural Revolution and also recent missteps in U.S. relations, Kausikan said.

In runners' terms, authoritarian governments excel at sprinting but are liable to collapse in a marathon.

There is no doubt that the life of a democracy shortens if reforms are neglected, as proved by the Weimar Republic in Germany, which lasted only 14 years and allowed the rise of the Nazi Party.

As new president of the U.S., Biden faces the challenge of easing racial tensions and narrowing the gap between rich and poor.

Excessive free competition has made the U.S. a society where the richest 1% of Americans now own half the value of stocks and mutual funds.

Biden has pledged to raise taxes on corporations and the wealthy in order to support health care and education for lower-income people. He has also said he will seek to increase jobs by boosting government spending to levels comparable to those during the Great Depression in the 1930s.

But fulfilling such pledges will serve only as a step toward the distant goal of narrowing the disparities dividing U.S. society.

To save democracy from exhaustion, attention should be paid to not only the equality of opportunity but also the equality of outcome. Lessons learned in the U.S. are also applicable to Japan and Europe.