TOKYO -- North Korea has been hit by a massive and apparently sudden onslaught of the coronavirus, with a swelling wave of infections threatening to overwhelm the secluded country's ill-equipped health care system.

The nation on May 8 announced what it said were its first confirmed COVID-19 cases. The galloping spread of the virus since then has severely jolted leader Kim Jong Un's autocratic government.

"There has been the biggest emergency incident in the country, with a hole in our emergency quarantine front, that has been kept safely over the past two years and three months since February 2020," the official KCNA news agency said as Kim convened an emergency meeting of the ruling Workers' Party's powerful Politburo last week. The Politburo decided to activate the country's "maximum emergency epidemic control system."

State media reports about the COVID surge reflect the government's sense of crisis, describing the situation as North Korea's "gravest emergency incident" and the "greatest upheaval since the founding of the country."

North Korea said the number of people suffering from fever started soaring at the end of April and reached a total of 2,460,640 on Saturday -- nearly 10% of its population. The government reported 66 deaths as of that day. South Korea's intelligence agency has estimated the actual number of fatalities is five to six times higher, according to that country's Yonhap News Agency. North Korean leader Kim Jong Un wears a face mask while inspecting a pharmacy in Pyongyang, in this undated photo released by the country's Korean Central News Agency (KCNA) on May 15.   © KCNA via Reuters

"The Kim Jong Un regime's leadership particularly fears the entry of a virus into the country," said a North Korean source informed on the inner workings of the regime. In North Korea, with its poorly resourced health care system, the spread of infections could "cause serious social unrest and shake the regime itself."

North Korea acted very quickly when the first COVID cases were confirmed in China, immediately closing its borders with its massive neighbor in early 2020 despite the huge cost to its economy. The move was described as "the word's earliest national border blockade" in the face of the pandemic.

Pyongyang imposed rigorous virus controls on all citizens, ordering them to ensure adequate ventilation, wash their hands frequently and wear masks. People suspected to be infected were subjected to large-scale quarantine. Even close aides to Kim were forced to go through strict quarantine before meeting the leader.

North Korea's nuclear and missile arsenals are powerless in the face of the invisible enemy. The government knew it had no ability to contain the virus once it started spreading. Keenly aware of this nightmare scenario, Pyongyang imposed relentless lockdowns in response to past regional outbreaks of new infectious diseases such as severe acute respiratory syndrome (SARS), which spread in the 2000s, and Middle East respiratory syndrome (MERS) in 2015.

Due to North Korea's border with China, its largest trading partner, experts never took Pyongyang's previous claims of "zero infection cases" at face value. But, given that it is a closed nation with limited international interaction, it is probably safe to believe there hadn't been any large wave of infections in the country. Before the outbreak, with the economy gradually reopening, Kim appeared to be confident about how North Korea had fended off the virus. 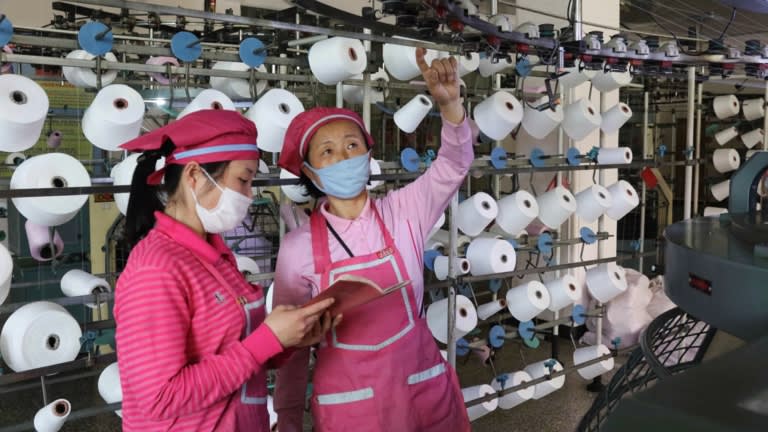 Staff wear face masks as they work at a knitwear factory in Pyongyang on May 18.   © AP

North Korea's seemingly successful zero-COVID policy has made the outbreak all the more shocking to the regime.

Leaders have been particularly disturbed by the fact that the virus has entered Pyongyang, the nation's capital. KCNA reported that the "first cases" of COVID-19 infections in the country were in members of an "organization" in the city, without giving further details. Patients in Pyongyang account for 25% of the total, according to local media reports on May 16. Among the nation's 13 "first-level" administrative divisions, the capital is the principal COVID-19 hot spot, with by far the largest number of suspected patients.

The country's political, administrative, military and economic functions are concentrated in Pyongyang, which symbolizes the power of the Kim dynasty. The leader has devoted huge resources to the development of the city since he took power.

There are high-quality medical facilities in part of the city where only the elite live. One is a maternity hospital that was opened to a group of journalists, including this author, in May 2016. Hygiene standards and health care quality in North Korea in general, however, remain far behind.

The "hole in our emergency quarantine front" mentioned in the KCNA report apparently refers to the spread of the virus into Pyongyang.

One suspected cause behind the "hole" in the supposedly ironclad wall of quarantine around Pyongyang is a series of large events held in the capital in April, including ceremonies to celebrate the 10th anniversary of Kim's leadership and the 110th anniversary of the birth of the late Kim Il Sung, the founder of the country and the young Kim's grandfather. There was also a parade to mark the 90th anniversary of the founding of the Korean People's Revolutionary Army. Experts say these celebrations may have become superspreader events as many soldiers and local residents took part without wearing masks. 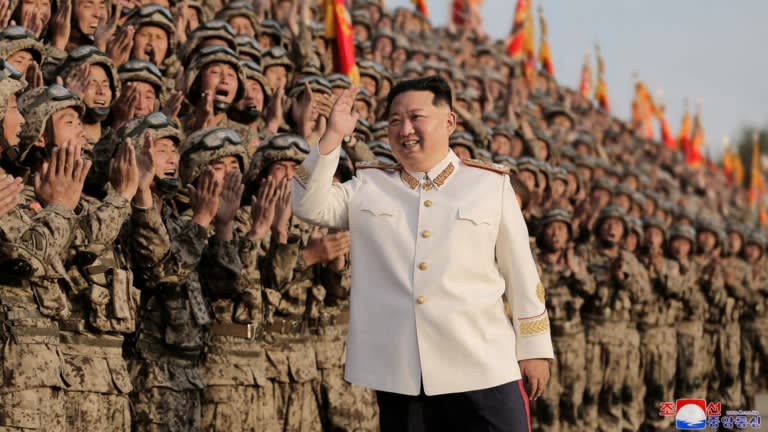 North Korea's Kim Jong Un meets troops who had taken part in a military parade in this undated photo released in April by the nation's Korean Central News Agency.   © KCNA via Reuters

In response to the outbreak, North Korea has introduced strict nationwide lockdowns based on administrative units. These strong quarantine and isolation measures reflect the government's fears over the situation. Kim's remarks about the crisis have been awash with words and phrases concerning attitudes and mindsets, such as "maintaining strong faith," "weakness of the will," "solidarity" and "defend at all costs," instead of references to specific measures to fight the virus.

This indicates that Pyongyang has no effective means to prevent an explosion of infections that could threaten Kim's grip on power other than using state-run media to alert all citizens to the public health crisis and urge them to closely follow recommended precautionary measures.

In addition to Pyongyang, infections are also spreading fast in North Pyongyang Province, which is adjacent to China. This has brought the resumed bilateral trade to a halt again. In a possible sign of frustration, Kim has stressed that the COVID crisis must not stop economic and construction work, emphasizing that projects such as the building of 10,000 housing units in Pyongyang and the greenhouse farm being erected in South Hamgyong Province must be completed on schedule.

It is, however, obvious that North Korea cannot pursue a "two track" path of lockdowns combined with a policy for coexistence with the virus. In a Politburo meeting, the apparently irritated Kim lambasted top party officials for a lack of medical supplies, accusing them of feeling "no responsibility or guilt" in this crisis and performing "no roles" because of their "negligence of duty."

North Korea rejected offers of vaccines from the U.S. and South Korea, calling these countries "hostile forces trying to topple the regime by spreading the virus."

Observers say Pyongyang refused to accept the offers of international aid partly because supplies of vaccines would come on the condition of allowing international monitoring of the inoculations and partly because the country does not have sufficient infrastructure for storing drugs at extremely low temperatures.

It will be a formidable challenge for North Korea to ride out the COVID crisis with its dismal health care system. South Korean experts warn that the North could be engulfed and overwhelmed by a tidal wave of infections.

Kim Jong Un is known for his quick decision making and pragmatism. It can only be hoped that the current crisis will force Kim to abandon his nuclear and missile programs and accept international humanitarian aid for the benefit of the North Korean people.