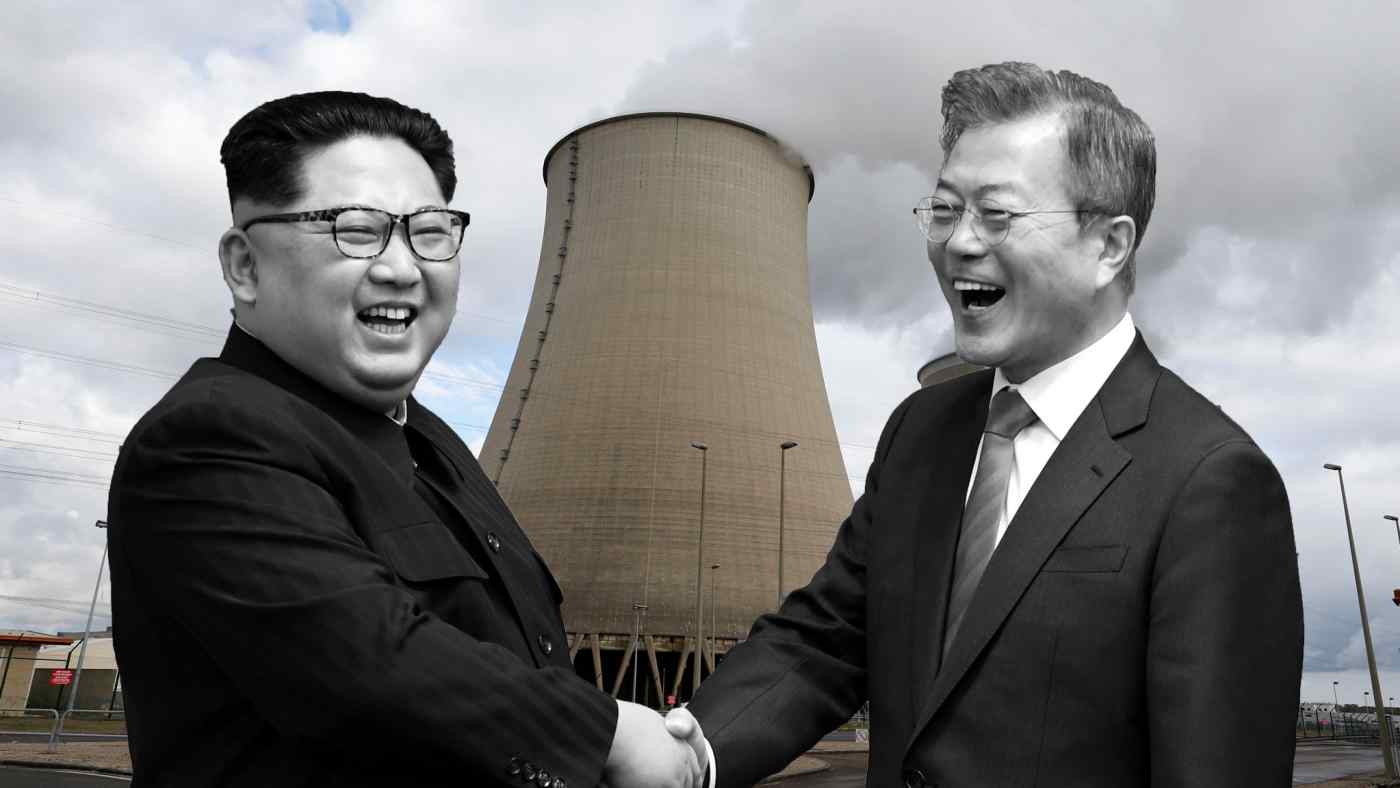 SEOUL -- Political turmoil has erupted in South Korea after a local broadcaster in late January disclosed the existence of government documents about a potential plan to help North Korea build a nuclear power plant.

The papers were prepared on the occasion of 2018 summits between South Korean President Moon Jae-in and North Korean leader Kim Jong Un that boosted a mood of reconciliation between their divided countries, according to Seoul Broadcasting System.

The revelation prompted South Korea's biggest opposition party to lash out at Moon for committing a "shocking act benefiting the enemy." The government and the ruling Democratic Party of Korea reacted by condemning the criticism as "intolerable."

The controversy is traceable to another case. When South Korea's Wolseong Nuclear Power Plant was closed ahead of schedule, the operating companies allegedly undervalued its economic viability on purpose in a bid to comply with the Moon administration's policy of phasing out nuclear power generation in the country. Prosecutors sought a warrant on Thursday to arrest former Trade, Industry and Energy Minister Baek Woon-kyu in the case.

The Board of Audit and Inspection requested the submission of related documents from the energy ministry. But some ministry officials entered the ministry building late at night and deleted 530 types of computer documents. On Jan. 28, however, SBS disclosed a list of those deleted, which included 17 reports about the possible plan to build a nuclear power plant in North Korea.

The 17 documents were made from May 2 to May 15, 2018 and were stored under a folder titled pohjois, a Finnish word meaning "north," according to SBS. They were thus produced between two Moon-Kim meetings held at Panmunjom on the armistice line between the two countries on April 27 and May 26 of that year. The conservative opposition People Power Party has accused the Moon administration of seeking to construct a nuclear plant in North Korea "in absolute secrecy."

Soon after taking office in 2017, Moon announced plans to phase out nuclear power generation in South Korea, including scrapping new construction projects and slapping a ban on the extended running of aged reactors.

But as his government has now been found considering construction of a nuclear power plant in North Korea, the conservative opposition People Power Party sharply reacted to the finding. "The Moon administration, while closing nuclear power plants in South Korea, sought to build a plant in North Korea in absolute secrecy," the PPP said in a statement issued under the name of party leader Kim Chong-in. The move is "nothing but a shocking act benefiting the enemy and could shake the administration's fate," it said.

The energy ministry acknowledged the preparation of documents but said they were considered internally as an "idea." While denying that the potential construction of a nuclear power plant had been proposed to North Korea, the ministry restored the deleted documents and made some of them public on Feb. 1.

There are three plans in one of the disclosed documents, which is tilted the "North Korean nuclear power plant construction promotion plan." One plan calls for building a current South Korean light-water nuclear reactor in Kumho in the North Korean province of South Hamgyong where a light-water reactor would have been constructed by the Korean Peninsula Energy Development Organization based on the U.S.-North Korea Agreed Framework signed in 1994.

The second plan envisions building a next-generation light-water reactor in the Demilitarized Zone separating the two Koreas, while the third proposes reviving the canceled construction of the Shin Hanul-3 and -4 reactors in Uljin County in the South Korean region of North Gyeongsangbuk to supply electricity to North Korea.

Comparing advantages and disadvantages of the three plans, the document concluded that the first one is more persuasive than the two others in terms of time period and cost of construction as well as consistency with South Korea's energy policy.

But "as uncertainties are extremely high due to the content and level of North Korea's denuclearization measures, there is a limit on drawing up specific steps to promote the plan," it said.

The document thus suggested that it is no more than a basis for discussions.

The government and the governing party sharply reacted to the PPP's criticism. Moon urged the opposition camp on Feb. 1 to "stop inflaming confrontation through holdover-like politics that should be abandoned."

Lee Nak-yeon, head of the Democratic Party, addressed the issue in a speech to the National Assembly the following day. "I was prime minister in 2018 and there was no talk about nuclear power generation at the summit," Lee said.

"The leader of the biggest opposition party crossed the line that must not be crossed, delivering an attack on the president that cannot be overlooked," he added. 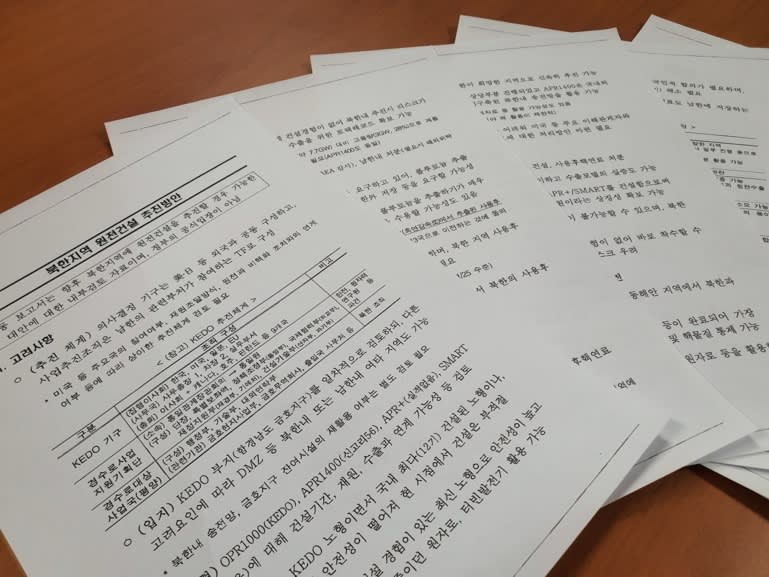 But the opposition camp continues to probe the case. The PPP and the conservative, middle-of-the road People Party jointly submitted a request to the assembly to launch a legislative investigation, suspecting that information about the construction of a nuclear power plant was contained in a USB memory stick handed to Kim by Moon at their meeting on April 27, 2018.

The government said that the stick stores information on Moon's so-called "New Economic Map Initiative of the Korean Peninsula" without any reference to nuclear power generation. But it has refused to disclose what is inside the device.

If the North wants to receive the South's support for building a nuclear power plant, it must adopt denuclearization measures such as returning to the Nuclear Nonproliferation Treaty and concluding nuclear agreements with countries concerned.

The internal document in the energy ministry also envisions an international framework, stating that the decision-making body for construction of a plant should include the U.S., Japan and other countries in addition to the two Koreas, while operation should be promoted by a task force in which concerned sections of the South Korean government participate.

The blame game between the ruling and opposition camps is escalating as mayoral elections in Seoul and Busan in April are approaching. Parties are eager to win the elections in the run-up to the presidential ballot in March next year.

The possible plan to build a nuclear power plant in North Korea is serving as great ammunition for conservative opposition parties wishing to topple the reformist government.

All told, the government should be placed under strict scrutiny not for studying the construction of a nuclear power plant in North Korea, but rather for hiding the fact.