Russia and China romance runs into friction in Central Asia

US strategists call for driving wedge between the traditional rivals

TOKYO -- China and Russia are cozying up ever closer as they find a common enemy in Washington.

During Chinese President Xi Jinping's visit to Russia in early June, the two countries signed a joint statement pledging to deepen their ties, as well as around 30 economic agreements.

Xi's Russian counterpart, Vladimir Putin, has criticized the U.S. for leveling trade and technology sanctions against China and pledged to cooperate with it to resist U.S. pressure. The two countries are also pushing back against U.S. objectives regarding North Korea and Iran.

While analysts puzzle over whether the romance between China and Russia has peaked or will grow still more fervent, it seems clear they need each other more than ever.

Laboring under U.S. and European sanctions, Russia's economic growth is forecast to slow to around 1% this year. That will encourage it to lean more heavily on China. For Xi, Russia is a useful tool in countering Washington's increasingly hard-line policies against China.

But despite their growing closeness, China and Russia must deal with frictions.

Russia "is feeling a potential threat" from China, according to an expert on the Russian military. The difference in the two countries' power continues to widen: China's gross domestic product is roughly eight times larger than Russia's and its population is 10 times larger. Russia is especially nervous about the possibility of Central Asia -- much of which was once part of the Soviet Union and is seen by Russians as their backyard -- falling under China's sway.

That is already happening economically. In 2018, China became the largest trading partner of three former Soviet republics: Uzbekistan, Turkmenistan and Kyrgyzstan. According to official data released by Kyrgyzstan and Tajikistan, China is the largest source of foreign direct investment in the two countries. China has also overtaken Russia as the fourth-largest investor in Kazakhstan.

Russia tolerates China's economic advance in Central Asia because its stands to benefit from infrastructure improvements and regional development that the flood of Chinese investment will bring. Security, however, is another matter. Moscow will not want China encroaching on its turf.

In Uzbekistan, in mid-June, cabinet ministers, senior officials and experts from the U.S., Europe and neighboring countries gathered to discuss the regional situation. China's activities loomed large during the meeting. 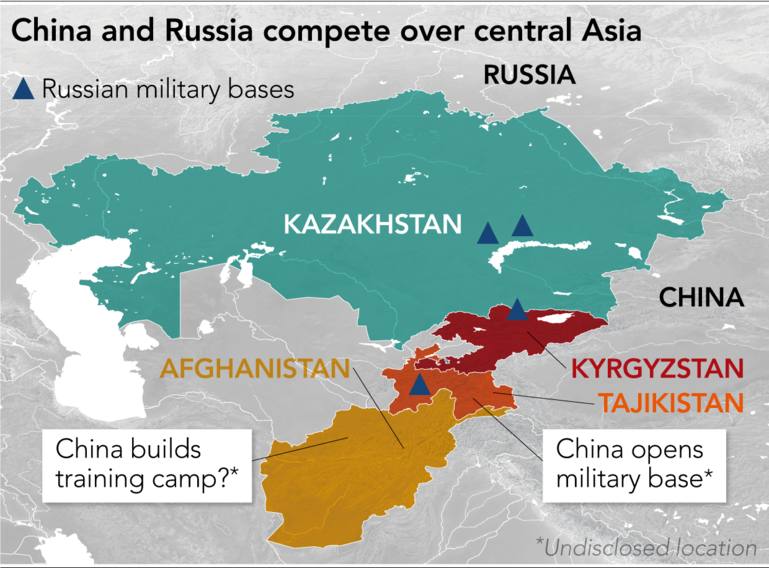 The strategic environment began shifting a few years ago as China began secretly deploying troops in Tajikistan, according to local experts. Although the Chinese Foreign Ministry has denied its troops are in the area, a person familiar with the matter said there are similar indication in Afghanistan.

China has, up to now, refrained from involving itself in regional security issues out of consideration for Russia. But its actions in Tajikistan, part of its effort to keep Islamist militants from entering the Xinjiang Uygur Autonomous Region, indicate a change in Beijing's thinking.

In light of Tajikistan's lax border controls, China may have sent troops to help it shore up security, one expert said. China is likely to have received a green light to do so from Moscow. But local diplomats said Russia is growing concerned about China's military moves.

Russia's largest military base outside its borders is in Tajikistan. The base is scheduled to remain until 2042, under a bilateral agreement. Given that it has around 8,000 troops at the base, it is unthinkable that the Russian and Chinese forces will both stay in the country without friction over the long term, according to one security strategist in Central Asia.

China's objective is to play a larger security role in Central Asia as part of its counterterrorism strategy without irritating Russia. That is easier said than done. Russia also seems anxious about U.S. ambitions in the region.

Leaders of the five Central Asian countries had planned to hold their second summit meeting in March. But the conference was canceled due a sudden change in Kazakhstan's president. So far, no new meeting has been scheduled. Whatever the official reason given for calling off the summit, a local diplomatic source said the real reason was that the participants were worried about provoking a backlash from Russia.

"Many in Russia still maintain an empire mentality. They consider the former Soviet Union to be their own sphere of influence," said Dr. Farkhod Tolipov, a political scientist who heads Knowledge Caravan, an independent education and research institution in Tashkent. "Russia wrongly believes that if the Central Asia region integrates it will gradually lean toward the United States and eventually enter U.S. sphere," he said.

If a rift develops between China and Russia, the implications for global politics would be significant. A weakening of the Sino-Russian axis would be favorable to the West and Japan. It would also help the international community increase pressure on North Korea.

At a public-private strategic dialogue between the U.S. and Europe in the Polish capital, Warsaw, in June, an idea was floated for how to drive a wedge between China and Russia to give the West an edge in its strategic competition with Beijing.

It may be impossible for Europe to reconcile with Putin, given Russia's annexation of Crimea, according to military strategists in Washington. But they argue the U.S. should try to ease tensions with Moscow after Putin's term of office ends in 2024 to encourage Russia to keep China at arm's length.

China and Russia share a border of more than 4,000 km. And although they are unlikely to repeat their military clashes of 1969, it also seems unlikely that their current love affair will last forever, given their historical geopolitical rivalry.