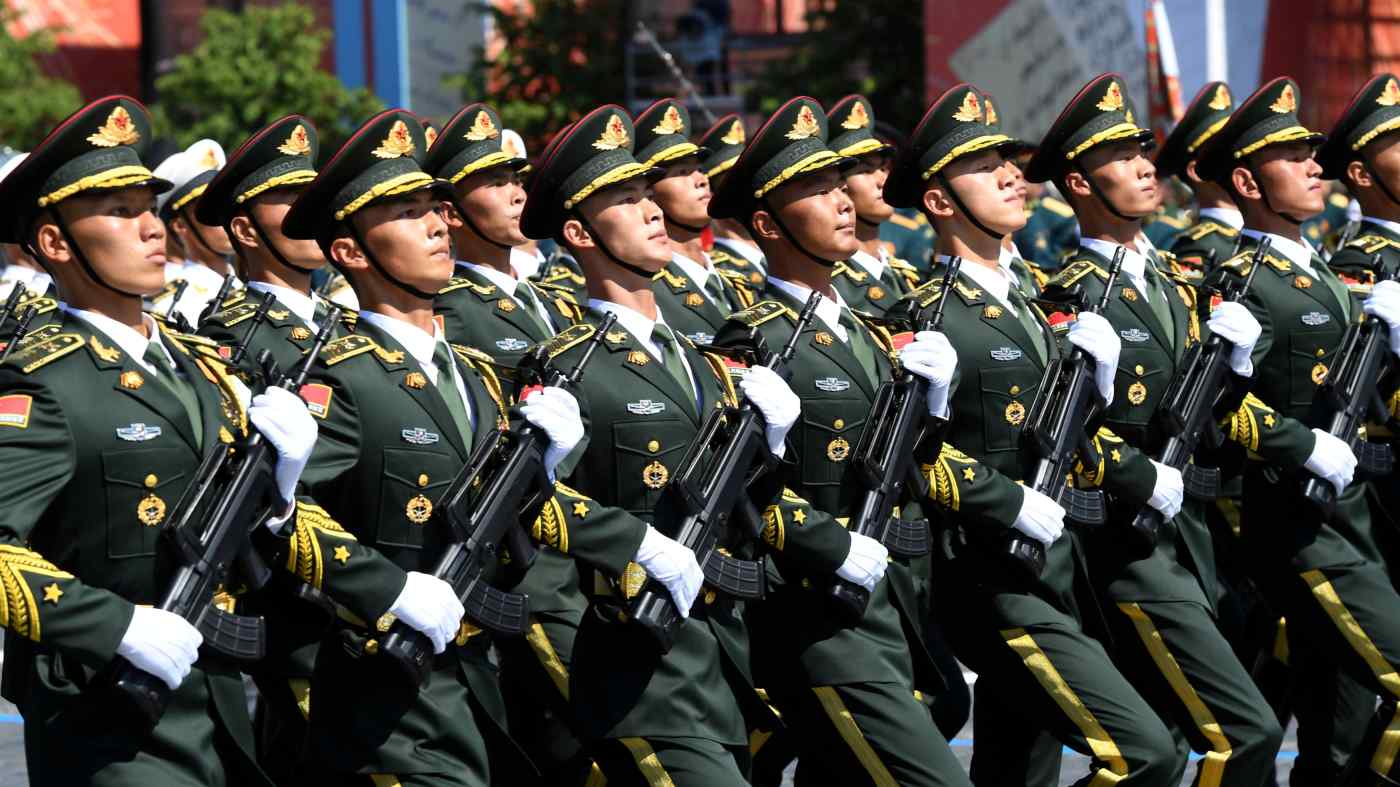 TOKYO -- Relations between China and Russia are about to enter a new phase.

Sometimes called "opportunistic partners," the neighbors have shown signs that they are beginning to form a united front, with their foreign ministers repeatedly criticizing the United States.

As the nations deal with U.S. and European sanctions, they are raising fears that they might grow aggressive in countering the democratic world.

When Chinese Foreign Minister Wang Yi and Russian counterpart Sergey Lavrov met in Guilin, in China's Guangxi Zhuang Autonomous Region, for two days beginning March 22, both were vehement in criticizing Western countries, commenting that the U.S. should not form blocs to bully other countries.

They also said there are no unified standard models for democracy and that sovereign countries have the right to choose their own model.

Their meeting came with the West ramping up its aggressiveness. Russian Foreign Minister Sergey Lavrov, left, and Chinese Foreign Minister Wang Yi greet each other prior to their March 23 talks in Guilin, China. The two ministers have displayed unity amid criticism and Western sanctions against them over human rights.   © AP

On March 12, the Quad nations of Japan, the U.S., Australia and India held an online summit with the intention of containing China and Russia in their minds.

On March 18-19, high-level U.S. and Chinese officials exchanged barbs at a meeting in Alaska.

And on the same day Wang and Lavrov began their meeting, European countries and the U.S. decided to introduce new sanctions against China.

Russians have mixed feelings toward China, which followed the Soviet Union in adopting communism. The neighbors have had an uneasy relationship at least since the 1960s, when a border conflict erupted into a military clash. In 1996, however, after the collapse of the Soviet Union, the countries announced a strategic partnership. In 2001, Putin invited President Jiang Zemin to Moscow for the signing of the Sino-Russian Treaty of Friendship.

In the process, Russia's advantageous position over China declined, with the neighbors' positions eventually reversing. According to the International Monetary Fund, China's gross domestic product in 2019 was more than eight times Russia's.

As China's economy grew at breakneck speeds, Russia's reliance on its neighbor increased. China is now the biggest buyer of Russian exports and the largest source of its imports.

What worries Russia is the risk of falling under China's dominance. The Putin administration, which tries to foster pride in the greatness of Russia, operates on a principle of rejecting influence from all other countries in regard to its domestic policies.

This means never allowing Russian pride and dignity to be tarnished.

Some Central Asian countries that had previously been part of the USSR and which Russia considers to be within its sphere of influence have come under China's influence. Now China, apparently oblivious to how it has chipped away at Putin's pride, is attempting to approach Russia.

The Chinese Communist Party-affiliated Global Times recently ran an editorial that said, "No country in the region can stand alone against either China or Russia, let alone fight against the two powers at the same time." It also asserted that China and Russia can counter the Quad. The editorial appears to indicate that China, which the U.S. regards as the West's largest threat, would feel more secure with a large military power like Russia at its side.

An event later this year might prove to be a touchstone in predicting whether China and Russia seek to form a military alliance down the road.

After two decades, the Sino-Russian Treaty of Friendship expires in July. But late last month the Chinese and Russian foreign ministers agreed to extend and expand the pact. They also announced that the countries' leaders will release a joint statement.

One focal point will be how Chinese President Xi Jinping -- who described the nations' relations as neither allying nor antagonizing at the treaty's 15th anniversary ceremony -- characterizes ties this time.

Another will be a large military exercise in the fall, an event Russia conducts in a different military district every year. The Chinese People's Liberation Army joined the drill for the first time in 2018, which was held in an eastern region relatively close to China.

China has been invited to participate every year since. This year, the exercise will be held in a western district close to Europe. If China participates, it will no doubt irritate Europe -- and demonstrate that China and Russia are forging military ties.

China and Russia have started calling Western-style democracies "the West" -- Xifang in Chinese -- and referring to themselves as the anti-West camp. If the opportunistic partners move toward a military alliance, an East-West confrontation could develop.

Asked about a possible military alliance with China, Putin in October said, "Theoretically, it is quite possible."

Did he mean it?

Russia is a tough and seasoned negotiator. It takes every opportunity to improve relations with the West through dialogue, using issues such as nuclear management, anti-terrorism, energy, technology and the situation in the Middle East as bargaining chips. A honeymoon with China could be read as a sign that it is willing to enter another round of dialogue with the West.

That said, maintaining its political power is the Putin administration's top priority as it wrestles with a sluggish economy and growing public dissatisfaction. This brings forward the possibility that Russia will cross the red line and sign an alliance with China. Such a step is even more likely should Moscow feel ignored and pressured by the West.