A day after being elected prime minister by Thailand's parliament, Prayuth Chan-ocha is seen before a meeting at the prime minister's office in Bangkok on June 6. (Photo by Kosaku Mimura)
TORU TAKAHASHI, Editor-in-Chief, Editorial Headquarters for AsiaJune 16, 2019 17:44 JST | Thailand
CopyCopied

BANGKOK -- After being officially proclaimed prime minister of Thailand by King Maha Vajiralongkorn on June 11, Prayuth Chan-ocha thanked parliament and ruling coalition parties for giving him the opportunity to serve the country.

During the two and a half months since the March general election, including a three-day coronation for the monarch in early May, Prayuth, a former general who was interim prime minister during the years of military rule, had to form a coalition to cement his leadership. But he won hands down in parliament in the vote for prime minister on June 5, thanks to a new constitution drafted by the junta and approved in an April 2017 referendum.

Under the new constitution, the 250-member Senate, made up entirely of junta appointees, joins the 500 elected members of the House of Representatives in choosing the prime minister. Prayuth won by a combined vote of 500 to 244, with six members not voting. It was a heavy defeat for Thanathorn Juangroongruangkit, the leader of opposition Future Forward party.

The results might have been different absent the 250 rubber-stamp votes for Prayuth in the Senate.

Thailand has a long history of military coups and constitutional rewrites. As a result, the role of the Senate has changed frequently. The 1946 constitution created a bicameral legislature, but gave the appointive Senate a largely symbolic role, restricting it to fairly low-profile duties such as selecting judges.

The 1997 constitution, touted as the most democratic in the country's history, gave the Senate much greater power, such as the authority to impeach the prime minister and other cabinet members, and to appoint members of seven independent organizations, including the Constitutional Court and the National Anti-Corruption Commission. All Senate members were directly elected.

A decade later, the document looked less democratic, stipulating that just half the Senate's members would be elected and the other half appointed. By 2017, the upper house was entirely appointed, giving the military control of all 250 seats. The Senate, whose role serves as a rough barometer of Thailand's commitment to democracy, voted for prime minister for the first time, becoming a mere tool for keeping the military in power.

Thailand is not the sole practitioner of military rule in Southeast Asia. Juntas in the region go back as far as Suharto, a former army officer who ruled as Indonesia's dictator for 32 years, starting in 1966.

Indonesia's 1945 constitution, drafted at the time of independence, gave the 1,000-member People's Consultative Assembly the power to appoint and dismiss the president. To maintain his hold on power, Suharto, who was head of the army's Strategic Reserves Command, decreed that 575 members of the assembly would henceforth be appointed by the president. Most of the appointees came from the military.

Thus was born a political system that only paid only lip service to democratic values, while ensuring that the military was the sole entity with the power to select the president. Suharto's remained in place until 1998, when political turmoil in the aftermath of the Asian currency crisis the previous year forced the military's hand: Suharto was ushered out of power.

The hard lessons of Suharto's reign spurred Indonesia to introduce direct presidential elections in 2004. The president was limited to two five-year terms.

Myanmar went the opposite direction, taking a page from Suharto's playbook. Although power was handed over to a nominally civilian government in 2011 after half a century of military rule, Thein Sein, a retired general, served as president for five years.

At the time of the power transfer, a system was crafted that reserved a quarter of all seats in both houses of the parliament for the military, which also retains the right to nominate either the president or one of two vice presidents. This ensures that at least one of the two vice presidents is chosen by the military even if it fails to gain a parliamentary majority following an election.

In the 2015 parliamentary election, the National League for Democracy, led by Aung San Suu Kyi, won an overwhelming majority, wresting power from the military. But one of the two vice presidential slots has been held by a retired general, Myint Swe.

Amending the constitution requires the approval of three quarters of the members of the parliament, effectively giving the military a veto over such changes unless some military members defect.

Thailand's system of military participation in the legislature and selecting the prime minister is clearly modeled on the formulas adopted by Indonesia and Myanmar. But Thailand has added some twists of its own.

To prevent a political resurgence of supporters of former Prime Minister Thaksin Shinawatra -- who was targeted in coups in 2006 and 2014, with the latter putsch ousting Thaksin's sister Yingluck -- the military also uses judicial tools. Many pro-Thaksin politicians and parties have been subjected attacks in the courts, apparently at the behest of the military.

Cambodia's ruler has faithfully copied this strategy. In November 2017, Cambodia's Supreme Court ordered the disbandment of the country's main opposition party, the Cambodia National Rescue Party, which Prime Minister Hun Sen has accused of plotting to topple the government. 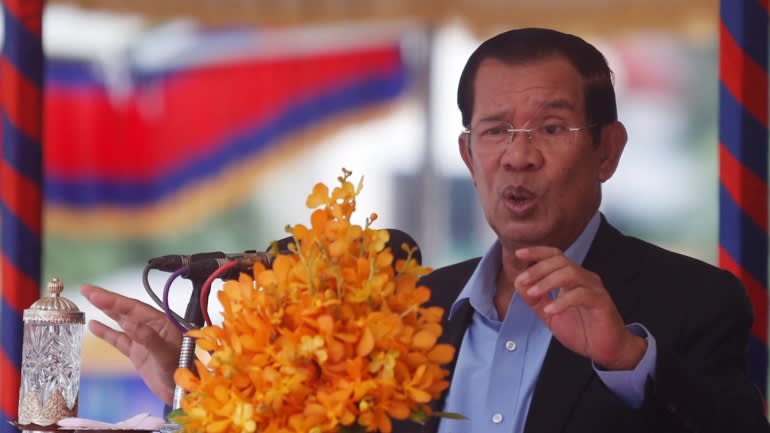 Cambodia's Prime Minister Hun Sen, who has been in power for 34 years, has followed Thailand's lead in using the courts to smash his opponents and maintain his grip.   © Reuters

This move left the government with no significant political opposition. It also set the stage for the ruling Cambodian People's Party, led by Hun Sen, a one-time commander in Pol Pot's Khmer Rouge, to win every seat in lower house elections in July 2018.

Hun Sen has brushed off international criticism of his use of the judiciary to crush opponents, saying each country has its own style of democracy. But he was merely aping something his neighbor was already doing.

Thailand was once lauded as a democratic role model for the region. Now it is moving back toward iron-fisted military rule, combining the heavy handed politics of neighboring countries with its own innovations.

The political trajectory of Southeast Asia in recent tears reflects deep-seated problems have hampered democracy in the region.

There are, however, some silver linings. Indonesia ended its long dictatorship through a process of internal change, and Thailand has limited the Senate's participation in electing the prime minister to five years.

Nevertheless, the outlook for democracy in this politically turbulent region remains as murky as ever.