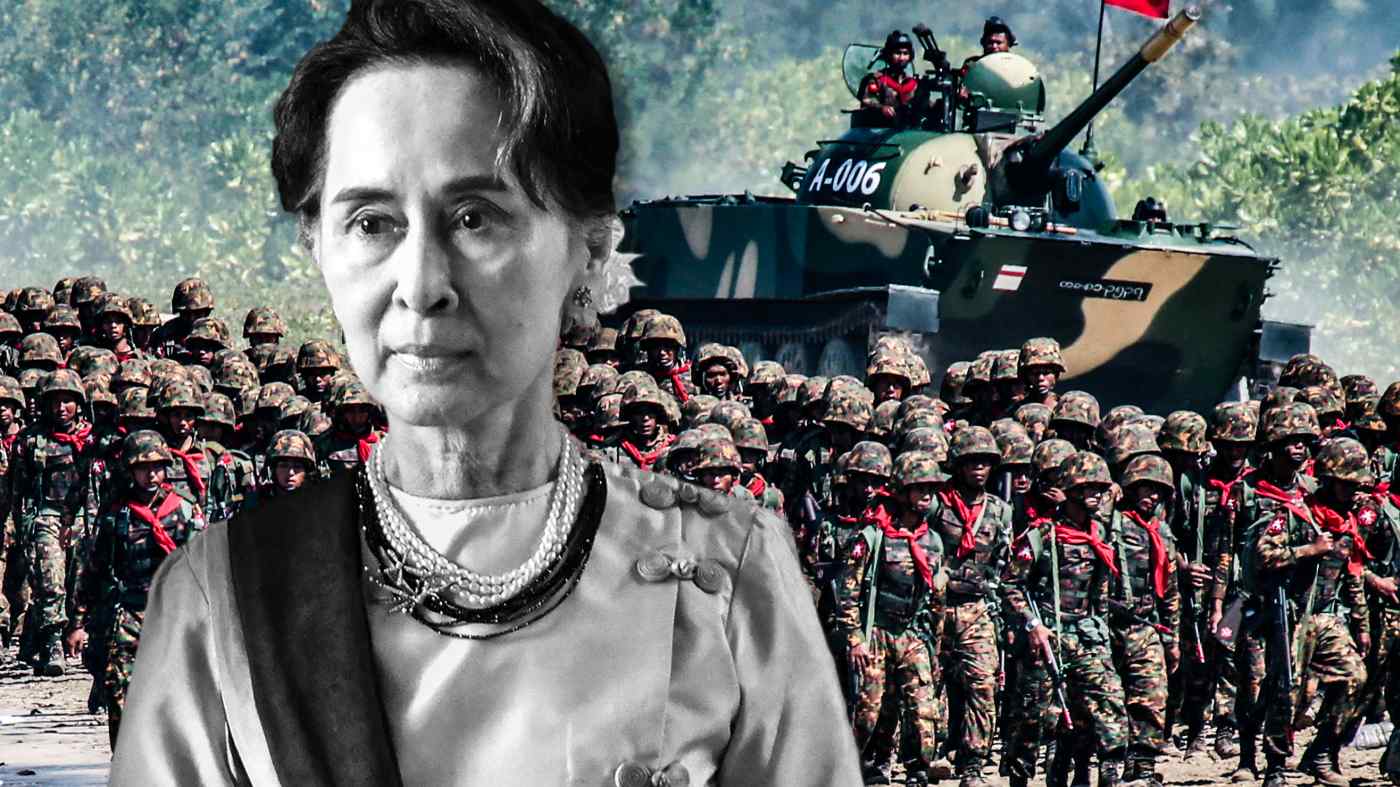 BANGKOK -- Myanmar's ruling National League for Democracy won a landslide in the general election on Nov. 8, securing 396 parliamentary seats, 83% of those contested. It was a larger victory than the NLD's electoral romp in 2015, when State Counselor Aung San Suu Kyi's party secured 79% of the contested seats.

But was it a big win for democracy?

The number of seats needed for the NLD to form the next government was 333, 70% of the contested seats and the minimum number to secure a majority of both chambers' 664 seats, even if the NLD loses all of the by-elections in 22 constituencies where polling was canceled due to security concerns, and taking into account the 166 uncontested seats allocated to the military.

There was a fervid atmosphere in the lead-up to the 2015 elections that brought the Nobel Prize laureate and pro-democracy leader to power. This year, voters were expected to calmly judge how well the government ruled over the past five years.

But the NLD landslide came despite the party having made little progress on its campaign promises, such as achieving peace with ethnic armed groups and revising the constitution. The party's chances to garner more seats seemed slim, although it was clear the NLD would remain parliament's largest force.

Instead of judging the NLD, voters revealed their unbroken belief in Suu Kyi, even as the powerful military continues to stand in the way of solutions to nationwide issues.

In the next five years, Suu Kyi must take on three major issues.

The first is amending the constitution, which allocates a quarter of parliament's seats to the military and requires a more than three-quarters parliamentary vote to amend it. In other words, it is impossible to amend the charter without a vote from at least one military-installed lawmaker.

Myanmar's military evolved from an armed force led by Gen. Aung San, one of the country's founding fathers, during World War II. Suu Kyi, who said she has no negative feelings toward the army her father founded, also said the constitution can be amended with the cooperation of one courageous military-approved lawmaker.

So far, though, that lawmaker has been elusive, and Suu Kyi has been unable to do anything about the constitution.

The second issue is negotiating peace terms. Myanmar is populated by 135 ethnic groups, but since its independence in 1948 the central government has been led mainly by the majority Bamar people. During the same period, more than 20 ethnic groups have taken up arms in what is the world's longest civil war. Respecting the will of her father, who was assassinated in 1947 at the age of 32, Suu Kyi has promised to build a federal system that can ensure equality among ethnic groups and lead to peace.

However, in the past five years only two groups have signed a cease-fire agreement, after eight groups did so during the previous military-backed administration of President Thein Sein. At least seven major groups, including the United Wa State Army and the Kachin Independence Army, continue to fight. The main focus of the talks is about how to deal with the tangle of armed forces once peace is brokered.

The minority ethnic groups want to maintain their forces for the sake of autonomy under the federal system, while the military insists all forces be integrated into the country's border guard.

The third issue is religious conflict. In 2017, about 700,000 Rohingya Muslims fled an army crackdown and became refugees. In 2019, Suu Kyi appeared at the International Court of Justice and denied allegations of genocide against the military, calling the charge an "incomplete and misleading factual picture of the situation."

Media, governments and nongovernmental organizations in other countries that had long been behind Suu Kyi are now lashing out. The human rights group Amnesty International called Suu Kyi's performance a "shameful betrayal" and stripped her of the Ambassador of Conscience Award it had given her in 2009. In September, the European Parliament removed Suu Kyi from the Sakharov Prize community, a network of people recognized for their outstanding work in human rights.

One difficulty in dealing with these issues is that voters are not necessarily anti-military.

On Nov. 2, less than a week before the general election, Ashin Wirathu, a radical Buddhist monk who has been dubbed "the Buddhist bin Laden," called on all monks in the country to vote out the NLD.

Known for radical sermons and leadership of an anti-Muslim movement, Wirathu pressured the previous government to legislate a law that restricts Buddhists from marrying partners of other faiths; the law was enacted in 2015.

Wirathu has slammed Suu Kyi for her reluctance toward the legislation.

In April 2019, he said: "[She] only knows how to put on makeup, wear fashion and walk in high heels." An arrest warrant has been issued for him on sedition charges.

Not many voters followed Wirathu's instructions despite Buddhists accounting for 90% of the population, with quite a few being sympathetic to the anti-Muslim movement and the military's hard-line stance on the Rohingya, the Muslim minority.

Acceptance of minorities is essential for democracy. In her first term, Suu Kyi faced the reality that struggling against the military and promoting democracy do not go far in solving the country's three major issues. Her second term will likely be a repeat experience.

There is also a sign that Suu Kyi has changed her attitude toward democracy.

Myanmar has seen a sharp rise in the number of coronavirus cases since late August, and Yangon in September was placed under a strict lockdown. Opposition parties called for voting to be postponed, but the election commission rejected the request. Suu Kyi backed the commission, saying the election was "more important than COVID."

The problem is she may have ordered the commission to decide against the opposition parties. And due to the pandemic, big rallies were restricted, moving the main battleground to the internet, where incumbents had a big advantage.

Then there is the matter of the 22 parliamentary races that were canceled due to "security concerns." All are in the western state of Rakhine and the northeastern state of Shan, places where the NLD failed to be the biggest winner in 2015.

In October, Thet Thet Khine, a lawmaker who had left the NLD, criticized Suu Kyi, saying, "She must know everything [...] a kind of control freak," in an interview with the local media.

Meanwhile, in neighboring Thailand, there have been fierce protests against the military's involvement in politics, but Anand Panyarachun, who led the Thai civilian government as prime minister and pulled the country out of a political crisis in the 1990s, said he believes the conflict is negotiable because it is an ideological conflict, not a racial or religious one.

"The conflict in Thailand," he said, "isn't ... about religions and races. It's about political ideology or the way of thinking about politics," which means "agreements are more within reach."

But in Myanmar, where ethnic and religious tensions are high, political negotiations to settle the disputes would be difficult.

And if Myanmar is headed for another dictatorship, one in which the charismatic Suu Kyi wields power, the NLD's second landslide can be seen as a setback rather than democratic progress.