Were Tokyo to pay more for stronger alliance, all of Asia-Pacific would benefit Donald Trump and Shinzo Abe in Osaka on June 28: Trump told Abe that Japan is a "country of warriors" but asked, "Where is the spirit?"   © Reuters
HIROYUKI AKITA, Nikkei commentatorJuly 11, 2019 12:39 JST | Japan
CopyCopied

TOKYO -- U.S. President Donald Trump in late June called for changes to what he described as an "unfair" Japan-U.S. security treaty, outdoing any other recent U.S. president in complaining about the decades-old document.

If the Japan-U.S. alliance is shaken, the security of the Asia-Pacific region would be greatly affected. Therefore, Japan, Australia, South Korea and Southeast Asia in no way should look at the issue raised by Trump as someone else's problem.

The Japanese government is striving to play down Trump's criticism, saying he did not mention anything about altering the treaty in his meeting with Prime Minister Shinzo Abe on June 28. During a TV program on Sunday, Abe stressed that he had answered questions raised by Trump about the bilateral security accord in their meetings and obtained reassurances.

In Japan and other Asian countries, there are views that Trump's criticism is no more than leverage to wrest trade concessions from Japan.

Trump once implied the possibility of a U.S. withdrawal from NATO in a bid to convince other NATO members to increase their defense spending. But the U.S. has actually increased its involvement in NATO. Recently, it decided to expand its military presence in Poland.

With regard to the Japan-U.S. security treaty, it would not be surprising if experts came out and said Trump is bluffing. But a closer analysis reveals this is wrongheaded, even harmful, optimism.

Trump knows that the Japan-U.S. security treaty is necessary. At a news conference in Osaka in late June, he said he has no intention of abolishing the treaty. But it should be understood that he does not consider the treaty acceptable as is. Ground Self Defense Force members ride a Type 90 tank during a joint exercise with U.S. Marines on Japan's northernmost main island of Hokkaido in 2017.   © Reuters

There are reasons to believe Trump is eager to alter the treaty. In fact, Trump is making behind-the-scenes preparations to demand that all allied nations spend more on defense.

Under Trump's instructions, the U.S. administration is detailing the expenses shouldered by more than 60 allies in connection with U.S. military bases and related costs, according to diplomatic sources. Washington will shortly launch negotiations with these partners to pressure them to increase their financial contributions for supporting the U.S. military.

Although Abe maintains that Japan will reject a sharp increase in such spending, he might have trouble maintaining this stance next year, when the negotiations on Japan's fiscal contribution for 2021-2026 begin.

Trump is acting out of knowledge that the U.S. can no longer be the world's policeman and that its allies should no longer fully depend on American troops. This is not a Trump policy; it was adopted by his predecessor, Barack Obama.

The alliance between the U.S. and Europe thus has been fraying since Obama was in the White House. At a closed-door dialogue between American and European security officials and experts in Poland on June 26, the U.S. criticized Germany for freeloading on the U.S. military and urged it to dispatch warships to the Asia-Pacific region like France and Britain have. The Germans protested.

Germany's defense budget is more than 1% of its gross domestic product, a higher ratio than Japan's. As a member of NATO, Germany is obliged to defend the U.S. when necessary. In the war in Afghanistan, Germany assisted U.S. forces, and many German soldiers were killed.

Nevertheless, the two countries find themselves in a contentious relationship, one that shows the Japan-U.S. alliance could also grow discordant. 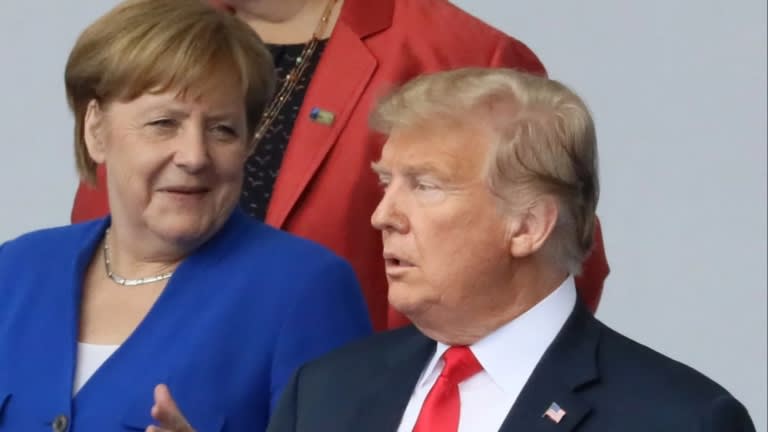 Angela Merkel and Trump at a NATO summit in July 2018. Trump is also pressuring Germany to spend more on defense.   © Reuters

Japan, which comes under the U.S.'s military umbrella, spends less than 1% of its GDP on defense and may well be seen as more reliant on American forces than Germany.

This is why, it seems, that Trump questions the Japan-U.S. security treaty. Out of consideration for Abe, Trump has refrained from openly lashing out at Japan, though he did voice his discontent to Abe behind the scenes.

Trump is prompting Japan to boost its own defense efforts, according to a Japanese government official who quoted Trump as telling Abe that Japan used to be a "country of warriors" referring to samurai and questioned, "Where is the spirit?"

When Trump and Abe last September talked about the cost of stationing U.S. troops in Japan, the Japanese leader said, "It would be costlier if the U.S. military in Japan should be brought back to California."

Under the circumstances, it is wrong to brush aside Trump's criticism. Rather it should be welcomed for the sake of stability in the Asia-Pacific region.

Perhaps Japan will be alarmed enough by the criticism that it takes action to further strengthen the Japan-U.S. security arrangement, specifically by increasing its contribution to the cost of stationing American troops in the country.

Japan already pays 70% of this cost. "As Japan's burden is considerably high compared to that of other U.S. allies, there is no room left for a further increase," a Japanese government security official said. This view is shared by many other government officials.

But there is no denying that one way or the other Japan will reluctantly accept an increase in its burden to make Trump happy. Although this would go against Japan's will, it would go a long way in keeping U.S. forces in Asia.

And the demands Trump is making could grow even stronger if a Democrat wins the next presidential election, in November 2020. Candidates like Bernie Sanders and Elizabeth Warren are campaigning on universal health care, free college tuition and other expensive programs. Should a Democratic president make good on any of these policies, he or she would undoubtedly seek more cost sharing than what Trump is calling for in regard to U.S. troops stationed overseas.

But he or she would also likely welcome Japan preempting such a request by increasing its financial support for U.S. bases in the country.

In addition, the latest "Trump shock" may prompt Japan to further accelerate plans to reinforce its defenses. The Japanese Ground Self-Defense Force has already established an amphibious warfare unit, and there has been more spending to defend Japan's remote southwestern islands. Japan is also rapidly strengthening its air defenses by purchasing more jet fighters from the U.S. and taking other measures.

These moves, if accelerated, will contribute to the security of not only Japan but also the Asia-Pacific region. "If Japan's Self-Defense Forces become more capable of self-defense, the U.S. military would be able to save energy that it could more readily expend in the South and East China seas," a senior JSDF official said.

Legislation that came into effect in 2016 permits Japan to exercise the right to take part in limited form of collective defense. The law also allows Japanese forces to expand their logistics support of U.S. forces. This could enable the U.S. military to be more involved in the Asia-Pacific region.

The Japan-U.S. security treaty, signed by Prime Minister Shigeru Yoshida following the end of World War II, will mark its 70th anniversary in about two years. If it were a person, it would be well on the path to old age. But with due effort, the life of the alliance can be extended indefinitely.

The benefits would be bestowed on Japan and the rest of the Asia-Pacific region.