Once a model for rest of Asia, nation succumbs to years of political shenanigans After years of cheering and jeering politicians who treated governing as an all-you-can-eat buffet, many Thai voters yearn for some stability.    © Reuters
TORU TAKAHASHI, Editor-in-Chief, Editorial Headquarters for AsiaApril 15, 2019 13:43 JST | Thailand
CopyCopied

BANGKOK -- It is no exaggeration to call last month's elections in Thailand cryptic. Although the election took place more than three weeks ago, and vote counting wrapped up in the following days, final results remain shrouded in mystery.

The election was seen as a potential milestone in Thailand's return to democracy after a military coup in May 2014 led to years of junta rule. The central issue was whether to allow that military government to survive.

But the Election Commission of Thailand has not unveiled the results. The reason? The commission, which acts as referee and scorekeeper, has decided to allow more time for people to report cases of potential electoral fraud.

The ref had initially received 330 reports of possible fraudulent acts.

In the election, Thai voters were allowed to directly select 350 lawmakers from single-seat constituencies, but their votes counted in another way, too. Their ballots are also to be used to determine how popular each party was and thus who will fill the chamber's 150 proportional representation seats.

This partially explains the delay in announcing official results. If the commission disqualifies a single-constituency candidate for electoral fraud, it will also have to subtract that candidate's votes from the party's proportional representation total.

Yet Thai media outlets have been able to take the numbers available and calculate how many seats each party has unofficially ended up with.

The Bangkok Post estimates that the anti-junta Pheu Thai Party -- which is loyal to Thaksin Shinawatra, a former prime minister who has been living on the lam since 2008 -- is in the lead with 137 seats. The pro-junta Palang Pracharat Party, which seeks to keep coup leader and Prime Minister Prayuth Chan-ocha in power, finished with the second-most seats, 118, according to the English daily.

The commission and junta say they do not want to release the results before the coronation of King Vajiralongkorn Bodindradebayavarangkun, scheduled for May 4-6. Perhaps they need time to deal with a dispute that has cropped up over vote-counting errors, or to decide on a formula to use in awarding proportional-representation seats.

But would it be going too far to suggest that these matters are merely pretexts to buy time for massaging the numbers? 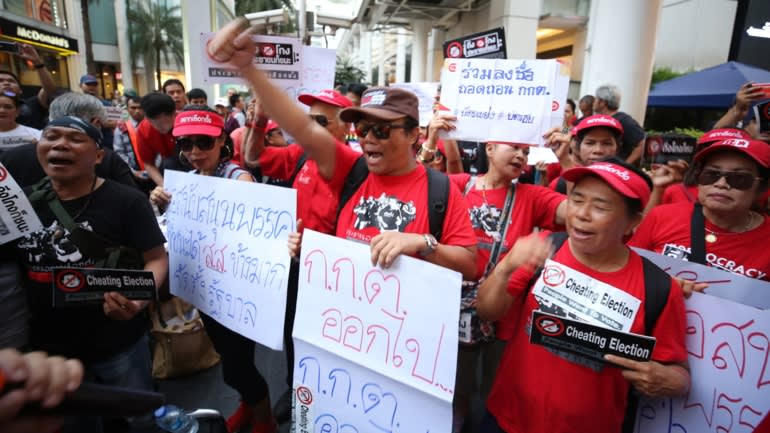 What has become clear at this point is that neither Pheu Thai nor Palang Pracharat alone has a stable lower house majority. In addition, Palang Pracharat does not have enough winning candidates who could combine with the army's selection of senators to choose Thailand's next prime minister.

The official results are to be announced on May 9. Until then, expect backroom wheeling and dealing as Pheu Thai and Palang Pracharat battle to lure other parties' winning candidates into their respective camp.

Many observers say what matters most is that voting has been completed and Thais are a step closer to a "return to civilian government." But where will this take them? Thais might really be returning to their "half a democracy" system that they endured for nearly three decades.

Although Thailand adopted a parliamentary democracy, military leaders got into a habit of staging coups. When calls for more democracy gained momentum in the 1970s, the military targeted civilians and twice spilled Thai blood.

It was Prem Tinsulanonda who helped Thailand escape its half-a-democracy stage while serving as prime minister from 1980 to 1988.

Although he hailed from the military, Prem followed democratic procedures -- reshuffling his cabinet from time to time and dissolving parliament ahead of elections -- even when internal divisions threatened his administration. Thailand was not a full democracy but at least it was a semi-democracy thanks to Prem's respect for the principles of the parliamentary system.

Prem and Thailand also benefited from a shift in the global economy. In the latter half of the 1980s, Japanese manufacturers accelerated their advances into Thailand to cope with the 1985 Plaza Accord, an agreement that called on Japan to allow the market to determine the yen's value against the dollar. As a result, the yen strengthened, Thailand became "Asia's factory" and the country's economy went on a yearslong winning streak.

The economic gains were also the result of political stability that sprouted from that half a democracy.

And full democracy was on the way. In 1997, a new constitution was adopted that stipulated prime ministers must come from the lower house. This was intended to prevent the military from interfering in politics. The charter also mandated that upper house members be elected by popular vote. Thai voters had already been selecting lower house members.

Suddenly, Thailand was an Asian model for democratization.

So how did it regress?

One big turning point came in 2014, the year of the latest coup. It was also the year that the junta abolished the constitution. Three years later, the military-led government pushed through a replacement that says the prime minister does not need to be elected to parliament.

In addition, the new constitution calls for the upper house's 250 senators to be appointed and for them to have a vote in nominating the prime minister. Most of the 250 will have an allegiance to the military.

The new constitution is designed to ensure that Prayuth, the mastermind of the 2014 political upheaval, remains in power. 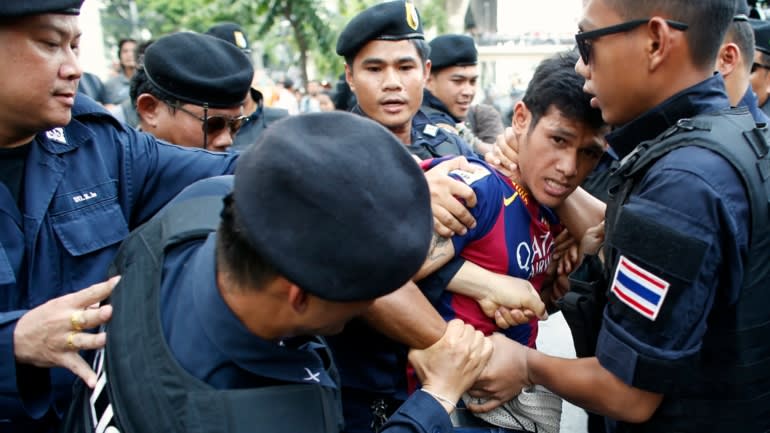 Police detain a man in Bangkok on May 24, 2014. Thais were divided over military rule after a coup toppled their government earlier that month; results of the first election since then, in March 2019, show they still are.   © Reuters

While this recap of recent history tells us how Thailand's military leaders have regained political clout, it says nothing about how Thais feel about the situation. Perhaps surprisingly, many do not seem to mind. Preliminary results released by the election commission show that Palang Pracharat won the most votes in March.

An explanation of this result begins in the post-Prem years.

Thailand's first fully democratic administration, inaugurated in 1988, was satirized as the "buffet cabinet" due to its members' apparent all-you-can-grab attitude toward public money. Thais were aghast at the flagrant corruption, and in 1991 the military staged a coup.

Thais initially supported the military. But as the army commander who led the coup disregarded his own promises and clung to power, the citizenry began holding large-scale street protests.

The military cracked down on demonstrators in 1992. Many activists were killed, others injured. The bloodshed ceased after the late King Bhumibol Adulyadej stepped in to mediate.

Five years later, Thailand would promulgate a new constitution that was designed to prevent the military from interfering in politics.

It has been more than two decades since Thailand took that step toward full democracy, yet last month more Thais voted for the party that pledged to keep elements of the military in power.

Thaksin was a high flyer under the 1997 constitution. But after he rose to power, he drew a backlash for an authoritarian style and his own all-you-can-grab tendencies.

Thailand grew politically divided between pro- and anti-Thaksin camps. His administration was toppled by a coup in 2006, and after his sister ascended to his old job, she fell ahead of the 2014 coup.

When Thais were finally allowed to have a say in their government, many voted for a return of Thaksinonmics. But more Thais voted for stability.

According to the World Bank, Thailand in 1998 was Southeast Asia's most democratized nation, ranked No. 81 globally. But in 2017, when the World Bank last compiled its democratization ranking, Thailand had fallen to No. 161, with only three countries underneath it.

Thailand is hardly the Asian model for democratization it used to be. Worse, it is at risk of becoming politically complacent. Call it democratic Asia's canary in a coal mine.