Though Supattanapong doubles as deputy prime minister, Prayuth ultimately controls Thailand's economic destiny. But the country's gross domestic product plunged 12% on year in the April-June quarter, with no assured plans for recovery. Some voice concern about ex-military man Prayuth to steer the economy, underscoring the void left by the departure of Somkid, who long served as the person in charge of economic policy.

In June, when rumors of a cabinet reshuffle surfaced, Somkid was confident of retaining his positions. "If the present team cannot get the job done, they should not stay on," he said. "If [the] new team has no ideas about how to do it, or cannot do it, then don't come."

Partly due to infighting within the ruling party, however, pressure on Somkid gradually mounted. In early July, he said wearily, "I have been prepared for a long time. I am old now. I already lost [my] heart years ago." Six days later, he stepped down as deputy prime minister. 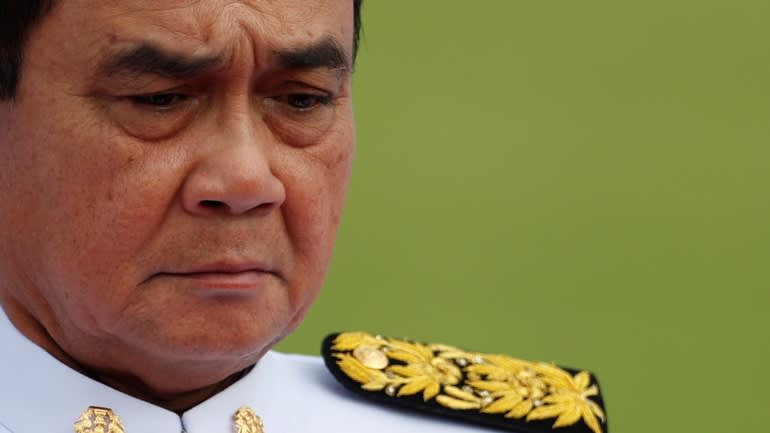 Prime Minister Prayuth Chan-ocha is an ex-military man with little experience in steering an economy, making Somkid's departure all the more serious.   © Reuters

Somkid did not appear at a news conference to announce his resignation. Instead, he had his right-hand man Uttama tell the media that he was resigning for health reasons. For a heavyweight in Thai politics -- Somkid served as deputy prime minister for two five-year stints -- it was a weak farewell announcement.

How has Somkid affected Thai politics and the country's economy?

Following his education at Thailand's prestigious Thammasat University and the National Institute of Development Administration, he earned a doctorate from Kellogg School of Management at Northwestern University in the U.S. There, he studied under Philip Kotler, known as the father of modern marketing, co-writing with his mentor "Marketing of Nations," a book that explores marketing strategies to increase a nation's competitiveness.

Dissatisfied with only constructing theory, the ambitious Somkid wanted to put it to practice. In a Nikkei article titled "My personal history," Kotler named Somkid as one of his better students. The American also recounted when Somkid, who was teaching at his Thai alma mater in the 1990s, asked his mentor advice about staying in the academic sphere or entering politics. Kotler encouraged him to try his hand at politics.

At the time, Somkid had been invited by former Prime Minister Thaksin Shinawatra to enter the political arena. When Thaksin set up the Thai Rak Thai Party in 1998, Somkid joined. His high stature in the TRT came to light when he was ranked third on the party's list of candidates for the 2001 general election. After the TRT swept to victory, Somkid was tasked with formulating economic policy as deputy prime minister-cum-finance minister. 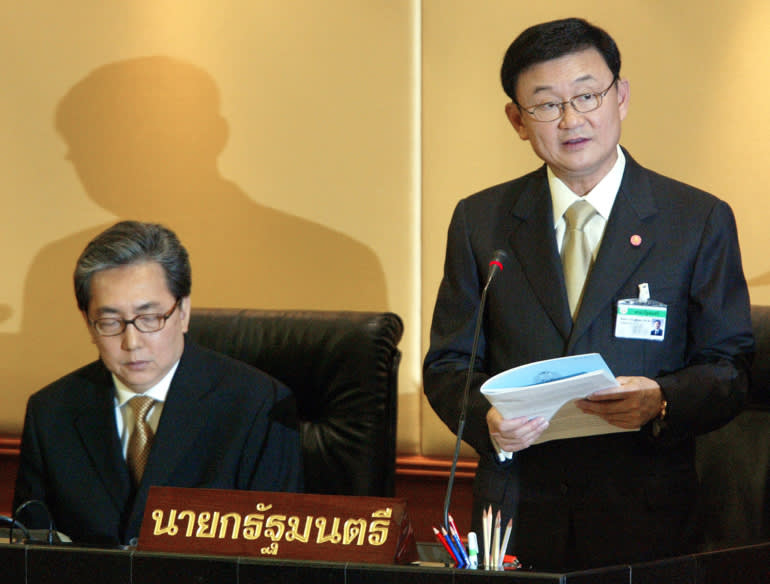 Somkid put his marketing genius to work creating village funds, an investment and lending program for more than 70,000 villages. The one village-one product scheme, modeled from Japan's Oita Prefecture, encouraged each village to promote one local product. He also promoted exports of automobiles and foods through two campaigns aptly labeled "Detroit of Asia" and "Kitchen of the World."

A series of Thaksinomics measures at the time were not necessarily Somkid's. According to a diplomat in Thailand then: "His true value [was] his outstanding ability as an organizer, who combines a variety of ideas, theorizes them then translates them into a policy.

His political fortunes began to rise to the point where he was regarded as a serious candidate for prime minister. This became moot, however, when a coup d'etat dethroned Thaksin in September 2006.

Deciding to work for the military junta, Somkid became an economic envoy, a move that infuriated the anti-Thaksin camp, which forced him to resign from the post in a week. Unsurprisingly, he was also labeled by the pro-Thaksin group as a traitor to the party. In those tumultuous days, Somkid mulled forming his own party. When the TRT was disbanded in May 2007 on charges of election irregularities, Somkid had his citizenship suspended for five years, after which he disappeared from the political spotlight.

Somkid returned after another coup in 2014 that again toppled a Thaksin government. He was appointed by the junta as an adviser, then as deputy prime minister in August 2015. It was the first time in nine years that he was in the deputy prime minister's seat, where he again oversaw the Thai economy.

"Somkid told me to tell him any problem I have, as he always respects the opinions of Japanese companies," said Soji Sakai, executive officer and general manager of the Chubu branch of trading house Marubeni. "I sometimes visited him to petition the Thai government. He quickly and appropriately dealt with our petitions. He was not a man of words, but really a man of action," Sakai noted.

Sakai, who met Somkid as the president of the Japanese Chamber of Commerce in Bangkok, believed that Somkid was always thinking about the interest of his country.

Somkid devised brilliant strategies during his second deputy premiership from 2015, including Thailand 4.0, an initiative to upgrade the industrial sector and push the country into the ranks of developed countries. He was also one of the architects of the Eastern Economic Corridor, a project to transform coastal industrial areas into sophisticated industrial hubs. Compared with his previous deputy premiership, when annual GDP growth was roughly 4% to 7%, growth at this time was in the 3% to 4% range, even before the pandemic, exposing Somkid as not quite the economic whiz as he had been under Thaksin.

"If Somkid wanted to use his expertise for the nation, he couldn't help but give up on the old boss and work for the junta," said a former bureaucrat who worked with Somkid in the Thaksin government. He added: "Thaksin was a businessman with a deep understanding of economic policy, and lent his full support to Somkid's strategy. Prayuth, however, is a military man. The stage for Somkid to exercise his full abilities was so different."

The ongoing student-led demonstrations in Thailand are not a war of ideologies like in the past between pro- and anti-Thaksin groups. Instead, they seem to represent a clash of generations. Somkid's resignation symbolizes the end of an era.

The day he left the government on July 16 marked the first anniversary of the Prayuth government. Somkid was surely successful to choose the day to show that he is the victim of a power struggle within the ruling party. He abandoned his responsibility as a top economic minister in the midst of the coronavirus crisis knowing that his action creates a void in the country's economic strategy. This behavior, uncharacteristic of an academic, may imply that he guards an ambition to one day return to politics.