Three things Japan can do to mend ties with South Korea

As tensions rise over export curbs, Tokyo needs to regain relevance to Seoul TOKYO -- The traditionally prickly relationship between Japan and South Korea has become even more toxic after a flurry of political and diplomatic flare-ups over the issue of wartime Korean laborers in Japan.

With both sides staunchly against diplomatic compromise, the outlook for the rapidly deteriorating relationship remains shrouded in an air of doom and gloom.

On Aug. 2, Japan imposed restrictions on exports of certain semiconductor materials to South Korea, a move that provoked a fierce wave of protests and anti-Japanese sentiment from its Northeast Asian neighbor.

In an apparent tit-for-tat move, South Korea said Monday it will remove Japan from its "whitelist" of trusted trade partners. A movement to boycott Japanese products is also spreading like wildfire in South Korea.

The majority view in the international community seems to be that Japan has switched to a hard-line stance toward South Korea, mounting pressure on its antagonistic neighbor to stop taking actions that seriously damage bilateral ties.

But that is not the case, according to official sources with knowledge of the Japanese government's recent retaliatory decisions. They say Seoul's attitude has forced Tokyo to resort to such drastic measures, which it has sought to avoid.

In October last year, South Korea's Supreme Court handed down a ruling ordering Japanese companies to pay compensation for Korean laborers who worked in Japanese factories and mines during the Second World War -- when Japan ruled the Korean Peninsula.

But Tokyo argues that all claims for wartime reparations were settled under a bilateral treaty signed in 1965, which established formal diplomatic relations between the two countries. Under the terms, issues concerning property, rights and interests of the two countries and their people were considered "settled completely and finally."

Alarmed by the prospect of the South Korean court ruling undermining the treaty -- a foundation of Japan's relations with South Korea -- Japan's government repeatedly requested talks over the issue with Seoul, which responded by ignoring them.

Prime Minister Shinzo Abe and his top advisers were initially unwilling to take any strong action that could be viewed as retaliation. Tokyo did not relish the idea of potentially dampening the flow of South Korean tourists to Japan just a year before the 2020 Tokyo Olympics, and was concerned about possible repercussions on the economy -- which is already bracing for a scheduled consumption tax hike in October.

But the Abe administration's hands were eventually forced by the prospect that the assets of Japanese companies seized in South Korea could be sold to pay compensation to the wartime laborers. Tokyo had to take the "retaliatory" step as a last resort, according to the official sources.

The question is why Tokyo failed, despite all its serious efforts, to get Seoul to come to the negotiation table.

The answer, in a nutshell, is: Because Japan's value for South Korea has declined.

Three major structural changes concerning the diplomatic dynamics that dictate the bilateral relations are behind the escalation of the feud, according to Japanese government officials and South Korean experts.

The first and most important change is China's rise as an economic power. China has become a far more important trade partner for South Korea than Japan. 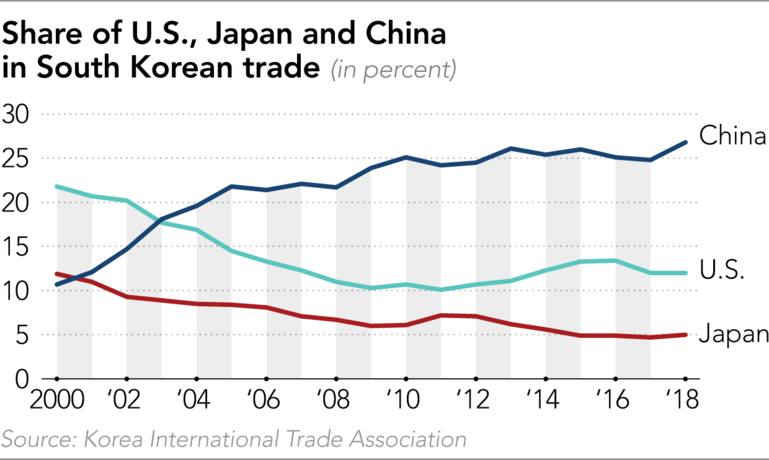 Japan, on the one hand, has teamed up with the U.S. in the face of the increasing security threat from North Korea to contain its nuclear ambitions with harsh economic sanctions. South Korea, meanwhile, has made forestalling a nuclear war a top priority, and is keen to pursue reconciliation with the North.

For South Korea, China is a more important diplomatic partner than Japan in dealing with the North, because Beijing supports North-South reconciliation.

Thirdly, an increasing number of South Koreans, especially younger generations who have grown in a more democratic society, have come to view the 1965 bilateral treaty -- which Tokyo negotiated with South Korea's then military dictatorship -- as an "unequal" pact.

Therefore, it is not only the long-running issues that are weakening the foundation of Japan-South Korea bilateral ties. Rather, it is these structural changes that are doing so, creating a situation in which historical issues are more likely than ever before to escalate into serious conflict.

What should be done, then?

One thing Japan can and should do immediately is enhance efforts to convey its messages directly to the South Korean people. There are some in South Korea who are distancing themselves from the anti-Japanese fervor sweeping the nation.

According to a survey by Gallup Korea in July, only 12% of South Koreans had a favorable view of Japan, the lowest since surveys began in 1991. Nevertheless, friendly feelings toward Japanese people remained fairly high, at 41%. That was only slightly lower than the 43% who do not have a good impression of Japanese. There is apparently a difference in how South Koreans see the Japanese government, as compared with Japanese people.

While Seoul has suggested scrapping a bilateral intelligence sharing pact called the General Security of Military Information Agreement (GSOMIA), a group of South Korean officers in the reserve on Aug. 7 issued a statement opposing the move.

Then, earlier in August, Seoul's central Jung-gu municipality was forced to remove a number of banners calling for the boycott of Japanese products after a wave of public criticism.

Leveraging off Washington's clout, Japan should also seek more trilateral talks with the U.S. and South Korea to prevent Seoul from pursuing further misguided policies with regard to China and North Korea.

A deepening rift between Japan and South Korea would be detrimental to the U.S. strategy for Asia. U.S. President Donald Trump has asked Prime Minister Shinzo Abe what can be done to put Tokyo-Seoul relations on better terms.

From a long-term perspective, it is also important for Japan to make efforts to reduce South Korea's heavy dependence on trade with China and help boost the country's economic importance. 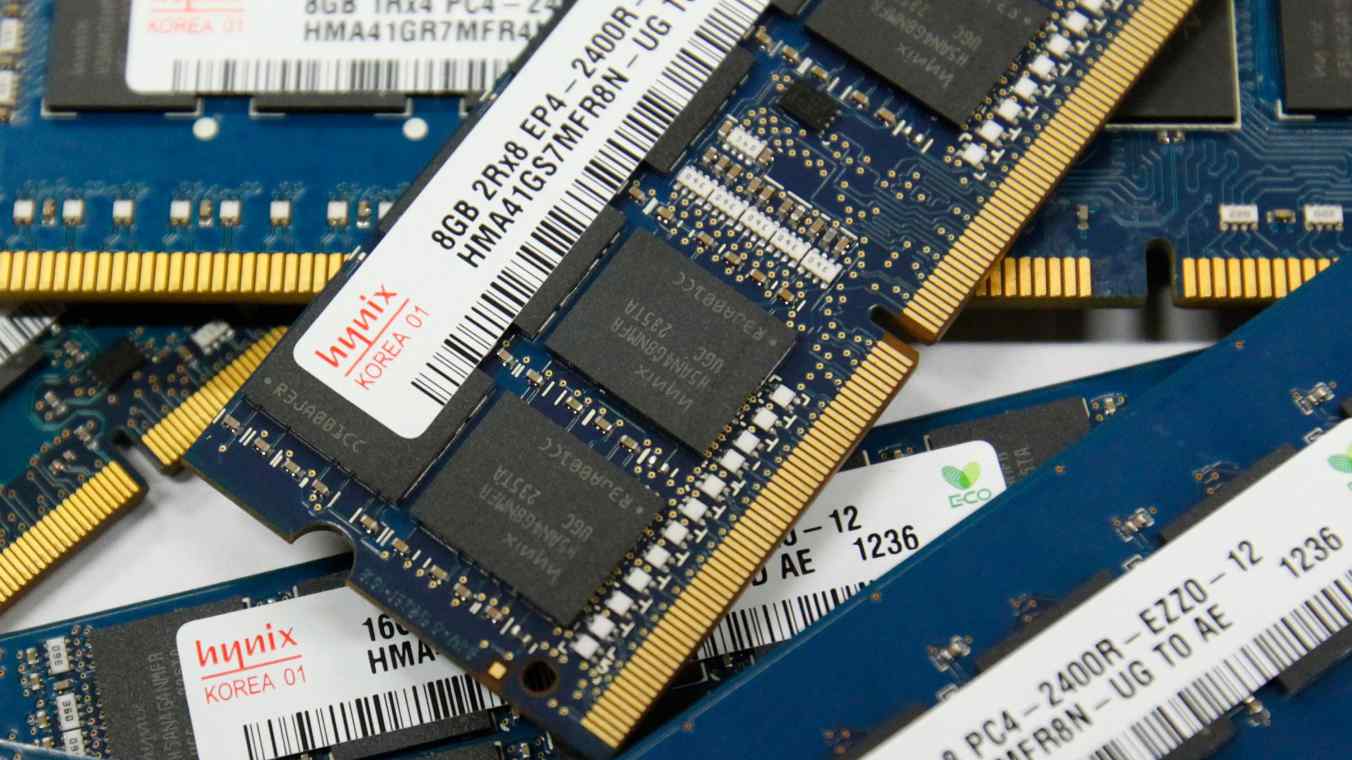 South Korea considers controls on exports of DRAM to Japan

Obviously, this cannot be done in a short period. One good place to start is to propose South Korea's participation in the Trans-Pacific Partnership multilateral trade liberalizing agreement.

Indeed, it may be difficult for Japan and South Korea to become close friends by only patching up their relationship, which has long-been defined by the wounds of history that may never heal. But they should at least try harder to maintain relations in a "normal" and stable state.

If they fail, and the conflict between Japan and South Korea continues never-ending, the only beneficiaries will be North Korea, which wants to see the collapse of U.S. alliances in the region, and China, which is bent on incorporating Northeast Asia into its sphere of influence. That would not be a situation that serves South Korea's national interest.