To prevent war in Taiwan Strait, Japan needs to unite with US TOKYO -- The rising military tensions in the Taiwan Strait bring back vivid memories of a crisis that shook the world in March 1996.

Aiming to block Taiwan's first direct, democratic presidential election, which was set to install Lee Teng-hui as leader, China fired missiles one after another into waters near Taiwan, calling the launches large-scale military drills.

Footage of the missiles aired daily on state-run TV in China. The U.S. responded by sending two aircraft carrier battle groups to the region. Tensions similar to wartime prevailed in Beijing, where this reporter was assigned at that time. A single misstep could have sparked armed clashes sending fire to Japan, where a shocked government was unprepared to evacuate Japanese citizens.

"Sleepless nights continued for a week," Ryutaro Hashimoto, then Japan's prime minister, told people around him.

When Nikkei asked Hashimoto years later what he learned from the Taiwan crisis, he cited the need for deeper ties between the Japanese Self-Defense Forces and the U.S. military, along with preparing for any scenario. "When needed, a relationship of trust between people in uniform is indispensable." Ryutaro Hashimoto was Japan's prime minister in 1996 when tensions between China and the U.S. rose over Taiwan, threatening to embroil Japan in a military conflict.   © Kyodo

Though 25 years have passed, Taiwan remains a potential flashpoint. Japan and the U.S. must be prepared for a crisis even during peacetime. Washington and its allies should strive to prevent the military balance from tilting excessively in China's favor, because peace depends on having Beijing recognize that the armed unification of Taiwan would be difficult.

The summit between Japanese Prime Minister Yoshihide Suga and U.S. President Joe Biden on April 16 represented a meaningful step forward in that regard. The two leaders issued the first Japan-U.S. summit statement mentioning Taiwan in 52 years and reaffirmed their commitment to a peaceful resolution of problems tied to the strait.

The meeting also let Suga and Biden establish their relationship. In the first 20 minutes or so, the two men discussed their political experiences, which started in local government, and shared their long careers as self-made politicians, according to Japanese officials who traveled with Suga. Biden said he felt very close to Suga because they had been in similar shoes.

The initial exchange between Suga and Biden was just the first step on a long path. Though Japan-U.S. talks regarding Taiwan have been kept confidential, the two countries reportedly have exchanged general views without detailing the measures the JSDF and American forces should take to address the issue. Their joint statement paved the way to begin such specific coordination between the countries at last.

But this cooperation has raised concerns from some sectors in Japan. "Japan will be caught in between the U.S. and China," is a common one. "Washington will test Tokyo's willingness to cooperate," goes another. "Japan should urge China and the U.S. to exercise restraint and ease tensions through dialogue," some say. A Chinese warship fires test missiles off the southeast coast of China in March 1996 in an apparent effort to influence the outcome of the island's first democratic presidential election.   © Xinhua/Reuters

Such views are emotionally understandable, but they are wrong, and they run counter to the maintenance of stability and prevention of war.

The worry of "being caught in the middle" stems from misunderstanding Japan's situation. Japan has abandoned strong military offensive capabilities in the postwar era and fully depends on Washington for defense.

Japan cannot be neutral in this picture.

Tokyo cannot have it both ways -- avoiding cross-pressures and relying on Washington for protection -- as this could create a crack between Japan and the U.S. and threaten the stability of Asia.

And Japan has learned a bitter lesson in the past. Yukio Hatoyama, prime minister from 2009 to 2010, treated relations among the three countries like an equilateral triangle and tried to balance relations with the U.S. and China.

What resulted was tension between Japan and the U.S., in part due to Hatoyama's attempts to move American military bases out of Okinawa.

China and Russia, meanwhile, only upped the pressure on Japan over territorial and historical issues.

China's maritime activities increased in the waters around the Japanese-administered Senkaku Islands. And in November 2010, then-Russian President Dmitry Medvedev visited Japan's Northern Territories, which have been occupied by Russia since 1945, for the first time as that country's head of state.

The idea that Japan should facilitate a dialogue between the U.S. and China also has the cause and effect the other way round. The U.S. has for many years urged China to behave in a responsible manner through dialogue, but failed to halt China's military expansion.

The military balance between the U.S. and China in the Taiwan Strait has already tilted in Beijing's favor. In recent years, the U.S. has reportedly lost repeated war games that have been conducted at the Pentagon in simulations involving the Taiwan Strait. 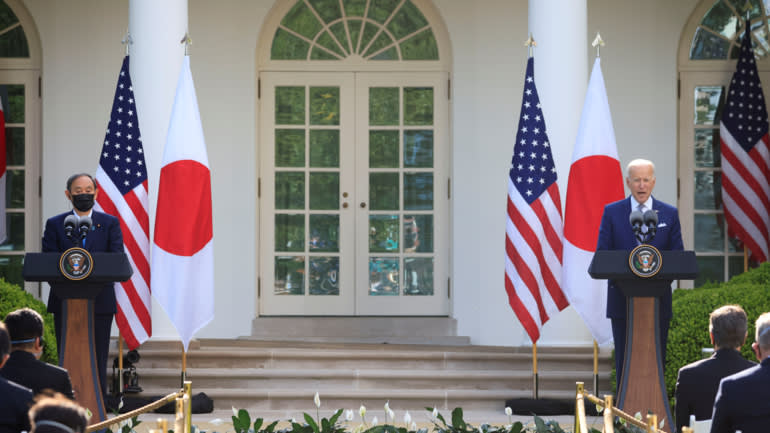 China is unlikely to change its behavior unless the military balance is restored.

The U.S. was reluctant to call for Japan's cooperation on Taiwan Strait issues until a few years ago. Washington had been able to maintain peace there alone and avoid unnecessary provocation of China by involving Japan.

William Perry, who was the U.S. defense secretary during the 1996 Taiwan Strait Crisis, told this reporter in later years that JSDF involvement was considered unnecessary and inappropriate. In fact, China stopped firing missiles when the U.S. dispatched aircraft carriers to the strait and urged Beijing to exercise self-restraint.

But times have changed, and the U.S. no longer can prevent disputes alone. The reference to Taiwan in the Japan-U.S. joint statement is no more than the follow-up recognition of the reality.

Though the effectiveness of dialogue should not be overestimated, neither should it be underestimated. Talks on crisis management between the U.S. and China and between Japan and China will become more important to avoid clashes through misunderstanding each other's intentions. The countries also need to promote economic cooperation for mutual benefit.

"Exchanges with the Chinese military will become more important than before and should not be halted," Hashimoto said.

Dialogue will not relieve tensions with China like a quick-acting drug. But it may slow the worsening of symptoms over the long run, like with Chinese herbs.