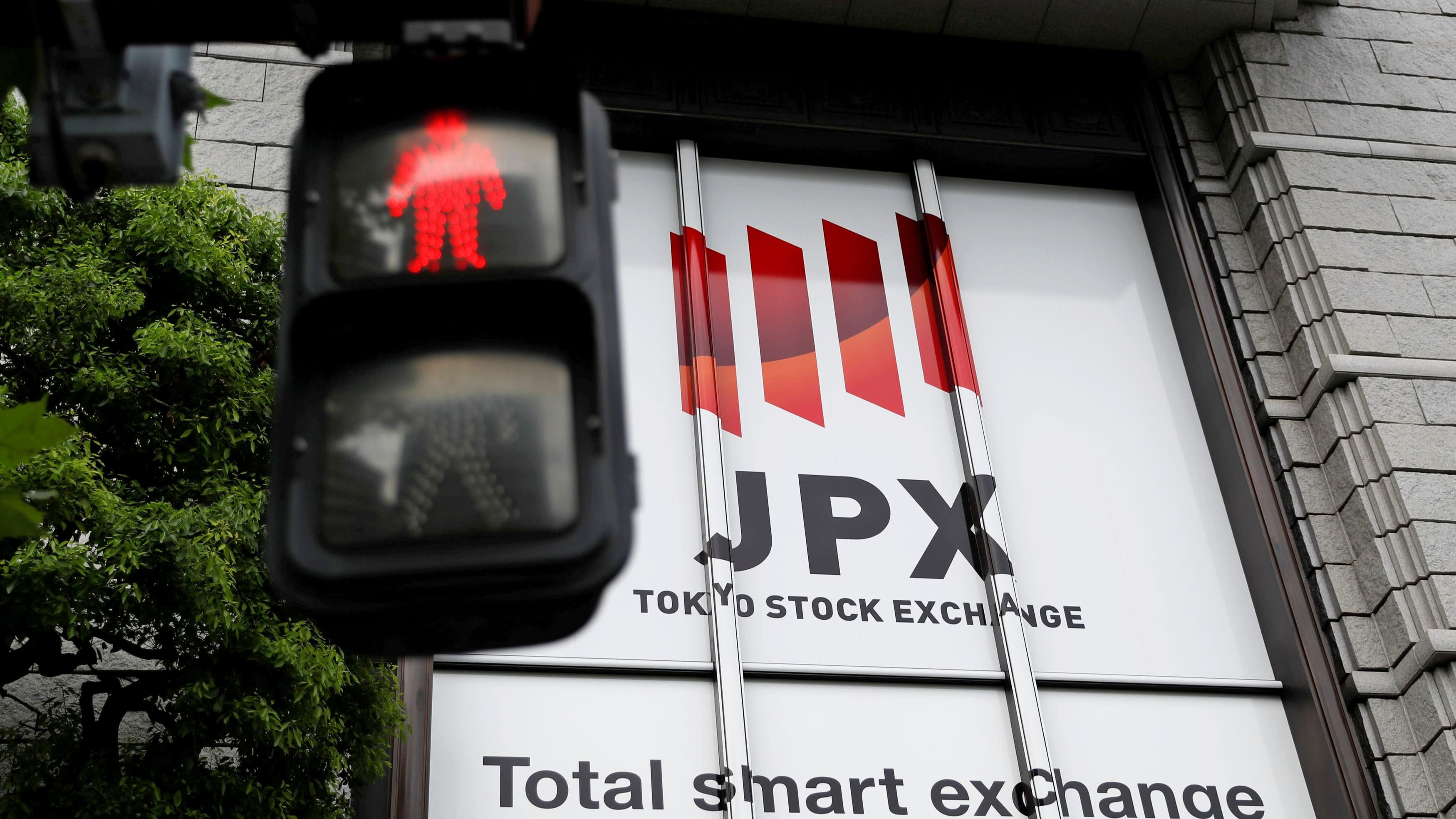 The Tokyo Stock Exchange halted all trading for an entire day due to a system glitch on Oct. 1.   © Reuters
MAKOTO KAJIWARA, Nikkei commentatorOctober 10, 2020 16:52 JST | Japan
CopyCopied

TOKYO -- The Tokyo Stock Exchange halted trading of all listed shares for the whole day due to a system glitch on Oct. 1, but the world showed little interest. The Wall Street Journal and the Financial Times initially reported the news only on inside pages. In South Korea, most major newspapers didn't even cover the incident.

The Tokyo bourse was once ridiculed as the Tokyo "Stop" Exchange by foreign media, when it was forced to shut down trading in 2006 after a surge in sell orders triggered by an investigation into internet company Livedoor overloaded its computer system. And while the joke was crude, it at least showed investors cared.

Foreign investors have been a net seller of Japanese stocks since 2018, indicating that they are losing interest in the market.

Actually, the world overall has become a much friendlier place for investment since the pandemic began. For example, Marshall's k -- the ratio of money supply to nominal gross domestic product -- rose from 1.9 to 2.2 in Japan and from 0.7 to 0.9 in the U.S. in the six months from the end of last year.

The Bank of Japan, which has increased purchases of exchange-traded funds, now appears to own nearly 7% of domestic stocks in terms of value. Nevertheless, Japanese equities are lagging U.S. shares even after prices have rebounded since April. One American economist says there are just too many unattractive companies in Japan.

Over the past 20 years, the number of listed companies in the U.S. fell from 7,000 to 4,000 as ailing businesses exited the market. But many that failed sought rehabilitation after being bought and taken private by others.

In Japan, by contrast, the number of listed companies has increased by more than 400 to over 3,800 in the same period, leaving those that are unappealing and unprofitable intact.

The dark side of the Japanese market came to light when regional bank stocks surged last month after new Prime Minister Yoshihide Suga commented before taking office that there are "too many" of them.

Investors sent the obvious message that Japan can become an attractive place to invest once weak companies are eliminated and the market has more blue-chip issues like in the U.S.

For investors, regional banks are a miniature version of Japan Inc. Out of the 82 banks on the TSE's first section, 81, including all regional banks, have price-to-book-value ratios of less than 1.

The percentage of Japanese stocks with a PBR below 1 is 50%, much higher than Germany's 29% and the global average of 42%. The PBR of most companies in traditional sectors, including banking, mining and steel, is below 1. 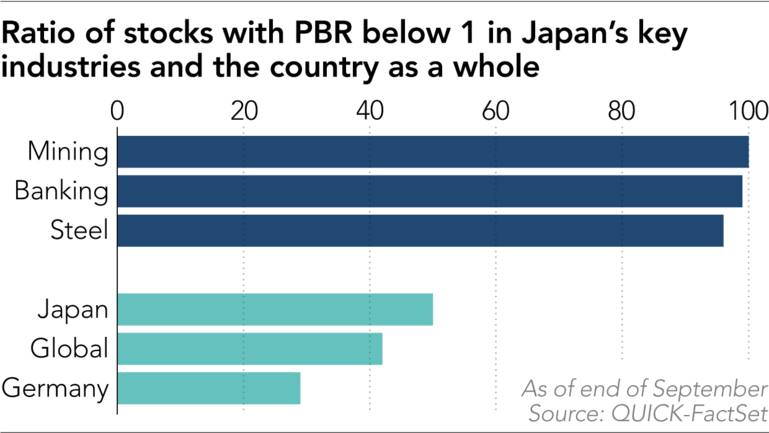 The PBR -- which compares a company's market value to book value -- echoes investor expectations. A ratio below 1 indicates concern that management could damage corporate value. If it remains below 1 for a considerable time, it is a clear warning from investors that the company is on the way to become a so-called zombie -- meaning they are barely alive and have little prospect for full resuscitation.

The coronavirus pandemic has completely changed the world's industrial structure. Chinese companies -- which have emerged from the worst of the health crisis ahead of their global rivals -- are investing in future growth. It will become increasingly difficult for Japan to win back investor confidence unless it takes action to promote corporate rejuvenation and save companies from becoming zombies.

Finnish mobile phone maker Nokia was once in dire straits as it fell behind rivals in the smartphone business. The company sold its mobile phone business in 2013 and then bought French communication equipment maker Alcatel-Lucent in 2015, turning itself into one of the world's leading providers of 5G, or fifth-generation, network equipment.

Many workers lost their jobs because of restructuring, but the Finnish government provided unemployment benefits and continuing education -- known as recurrent education -- an all-encompassing term within a broad spectrum of postsecondary learning.

A revived Nokia started hiring again while startup businesses boomed. Finland has succeeded in changing its industrial structure and is now counted as one of the most innovative countries in the world.

Finland's economic revival would not have been possible without decisive corporate action and a move by the government to offer an adequate safety net to fuel growth after tough times. Finnish stock markets have recovered since April the same way as their U.S. counterparts.

In Japan, meanwhile, companies are showing some signs of structural changes.

Big companies have ample cash, and higher stock prices have saved them from posting pandemic-related impairments.

Late last month Nippon Telegraph and Telephone said it will acquire its struggling subsidiary NTT Docomo to shore up its business. Apparel maker Koizumi bought five brands from Renown, which went under in May. 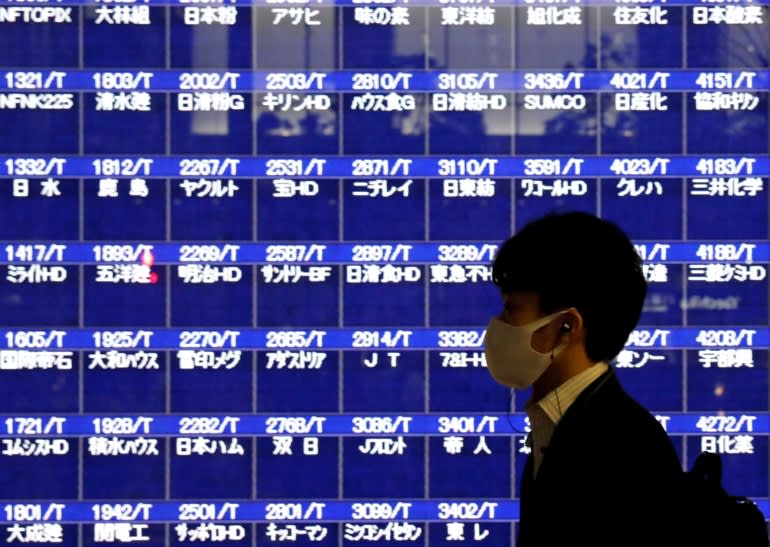 Stock prices are blank on an electronic board in Tokyo the day the TSE halted trading for all financial products.   © Reuters

Mergers and acquisitions involving Japanese companies jumped 60% to $200 billion in the first nine months of this year compared with the same period in 2019, and their global share has reached a 20-year-high of 9%, according to U.S. financial data provider Refinitiv.

That's why easy government bailouts are risky. Last month, it was revealed that the Japanese government guaranteed 130 billion yen ($1.23 billion) of 180 billion yen in crisis loans to struggling Nissan Motor by the Development Bank of Japan. Yet, premiums on Nissan's credit default swaps have risen, factoring in its default risk.

Obviously, there is a limit to what the government can do to help Nissan, and repeated public bailouts can only damage the country's reputation in the eyes of investors. It seems the market is pushing both Nissan and authorities to end stopgap measures that worked only when the economy was steadily growing.

Ultimately, global indifference to the latest glitch in the Tokyo bourse should serve as a wake-up call that investors are losing interest in slow-moving Japan, as other countries speed up public-private initiatives to remake their corporate sectors.