Trump and Biden use antagonism against Beijing to win votes

China becomes battleground at a time when international cooperation is key WASHINGTON -- Already strained relations between China and the U.S. are being further tested by the coronavirus pandemic, as a war of words between the two intensify.

Both sides have been trading accusations about the origin of the virus and blamed each other for a lack of transparency. President Donald Trump is even threatening to slap punitive tariffs on China.

Yet, Trump's actions are seen by many as simply a plan to whip up support ahead of the U.S. presidential election on Nov. 3, against his Democratic opponent, former Vice President Joe Biden.

The coronavirus outbreak has made it hard for both candidates to go on the traditional campaign trail. Trump's handling of the pandemic and his many ill-advised comments about cures have made him a laughingstock to many. He is now cranking up the heat on China's management of the crisis to divert this lurid attention away from himself.

A poll conducted in March by the U.S. think tank Pew Research Center found that 66% of Americans surveyed are negative about China, while only 26% are positive. A similar survey when Trump took office in 2017 showed roughly 50-50%. Americans have grown wary of China in large part because the Trump administration has taken a tough stance against it, citing Chinese menace and unfair trade practices. 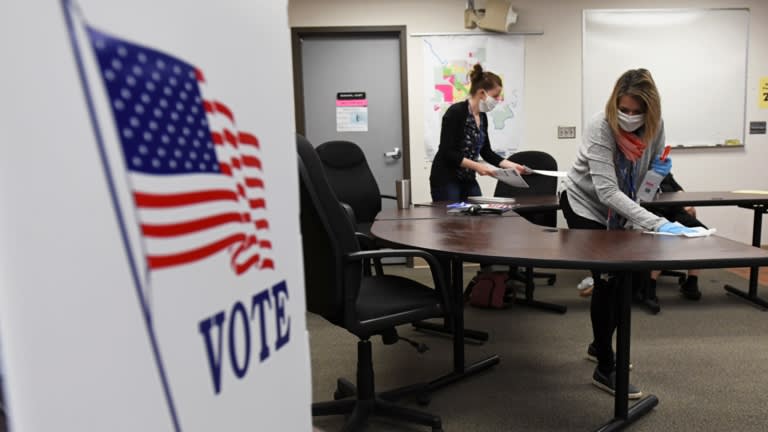 Trump's approval ratings are falling due to a weakening U.S. economy and stock price falls as the coronavirus outbreak bites.    © Reuters

The coronavirus has now claimed more than 75,000 lives in the U.S., higher than the number of Americans killed during the Vietnam War.

Trump's approval ratings are falling, in large part due to a weakening U.S. economy and stock price plunges, as well as his questionable initial response to the coronavirus outbreak. In a desperate attempt to turn the situation around, the president is wielding the China card.

Trump's Republican Party machinery is doing what it can to fuel that animosity. An internal party memo on the COVID-19 pandemic, obtained by a news media organization, told members: "Don't defend Trump, other than the China travel ban -- attack China."

The Republicans are also keeping the heat on Biden with their allegations that his son Hunter had illicitly profited from financial dealings with China. This helps them to paint a picture of Biden as being soft on China.

Biden is aware that such a perception could hurt his campaign. In a piece he contributed to Foreign Affairs, he stressed the need to get tough on China, vowing that he would not tolerate Beijing's infringement of intellectual property rights owned by U.S. companies and unfair competitive edge that state-run Chinese enterprises enjoy.

Biden has also vowed to increase pressure on China over human rights issues in cooperation with U.S. allies, while stressing that "there is no reason we should be falling behind China" in the high-tech sector.

In addition, Biden has also aimed his attack of Trump at his earlier remarks praising Chinese President Xi Jinping's handling of the new coronavirus outbreak and the transparency Beijing showed.

Despite these efforts by the Biden side, there remains an idea that he took a conciliatory stance on China while he was in government under former President Barack Obama.

As such, Biden cannot afford to show any weakness now in this respect, particularly as it is clear that Trump will stop at nothing to be reelected. China will be the main battleground.

If Trump's administration threatens to slap punitive measures on China as punishment for the coronavirus outbreak, Beijing will take retaliatory steps in such fields as trade and security. While the coronavirus crisis is feared to adversely affect the global economy in the long run, the damage will be wider and more serious if the world's two biggest economies come into collision again. 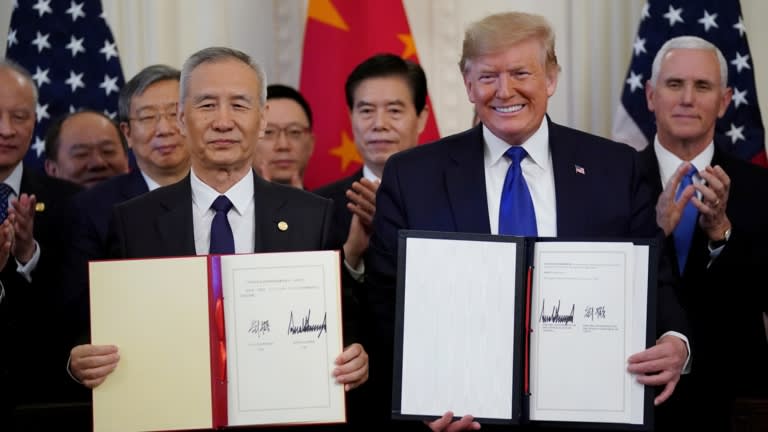 Trump and Chinese Vice Premier Liu He posing for photos after signing "phase one" of the U.S.-China trade agreement in January. Trump had talked of the trade agreement as an achievement of his presidency in the first three years.   © Reuters

Trump boasted about the first phase of a trade agreement between the U.S. and China as an achievement of his presidency in the first three years. He has now abandoned such peacemaking efforts.

But if the U.S. further raises tariffs on imports from China, American consumers will suffer more. If China annuls its pledge to purchase agricultural and other products from the U.S., American farmers will not last two seconds as they are already suffering from a plunge in domestic demand.

The disruption of supply chains between the U.S. and China is a double-edged sword. It makes sense for the U.S. to reduce its reliance on China for medical supplies such as face masks and ventilators. But even if supply chains are cut off, manufacturing operations are unlikely to return to high-cost factories in the U.S.

Trump has decided to halt U.S. funding to the World Health Organization over its claim that the body was "China-centric." But it is unclear whether the decision will benefit the U.S. on a long-term basis. China has already announced that it will increase funding to the WHO, thereby wresting from the U.S. any influence over the global body that it once had.

Yet, China is also vulnerable because its diplomatic model of offering aid to gain control, through its Belt and Road Initiative and other programs, has raised wariness and weakened trust in the country.

If the Xi administration loses its composure and threatens the security of Taiwan, Hong Kong and Southeast Asia, a confrontation with the U.S. could be inevitable.

"I think that the [U.S.-China] relationship is probably at the worst point since at least [normalization of bilateral diplomatic relations] of 1979," said Ryan Hass of the Brookings Institution, who oversaw China policies in the Obama administration.

"There is no sign that there will be meaningful efforts at coordination between Washington and Beijing anytime soon," Hass said. "Right now, the most important priority is to save lives and to stop spread of the virus and to rescue the global economy. But that's not going to happen," he said.

The world is petrified of the pandemic for which a cure and a vaccine have yet to be developed. Although global cooperation is more important than ever now, the U.S. and China cannot lead the effort.

It now rests on other world leaders, such as German Chancellor Angela Merkel, French President Emmanuel Macron and Japanese Prime Minister Shinzo Abe, to call for self-restraint from the U.S. and China and to nudge them to make a united effort to contain the pandemic.

The Trump team is testing to see if it could use antagonism against China to its own advantage in the election but it must not take it so far that irreversible damage is done to the international order.