Trump not the only reason China is mending ties with Japan

Beijing aims to learn from Japan's reaction to aging society TOKYO -- The dispute between Japan and China over the Senkaku Islands once escalated to the point where the slightest provocation could have caused a major clash. Now the two countries are making an about-face, working hard to improve their relations.

Ministerial-level economic talks between Japan and China took place in Beijing on April 14-15. Chinese Foreign Minister Wang Yi, who had given Japan the cold shoulder, changed his attitude and went so far to say that Japan-China relations have returned to normal.

On April 15, Chinese Premier Li Keqiang met with Japanese Foreign Minister Taro Kono and mentioned normalization, signaling that relations between the two countries are entering a favorable phase. These remarks by high-ranking Chinese officials reflect a decision by China's Communist Party rather than their personal views.

This view is not far-fetched, given that interactions between Japan and China are resuming. On Wednesday, a destroyer of Japan's Maritime Self-Defense Force will visit China, the first in about seven and a half years. President Xi Jinping is due to attend the Group of 20 summit in Osaka at the end of June, the first time in 11 years a Chinese president has visited Japan.

Various regular meetings at vice minister and bureau chief levels have been shelved by China to protest Japan's nationalization of the Senkaku Islands in the fall of 2012 but they are also being resumed. It is safe to say that relations between Japan and China are returning to normal.

The question is how solid their reconciliation is. On the surface it appears that China is approaching Japan in a calculated attempt to ease rising tensions with the U.S. Chinese fishing boats depart toward the East China Sea. Regular diplomatic meetings that had been shelved by China to protest Japan's nationalization of the Senkaku Islands since 2012 are set to resume.     © Reuters

In fact, the view is gaining ground within China's Communist Party that the U.S.-China conflict will continue for a long time as an era has begun in which the two countries will jockey for supremacy. This expectation seems to have been strengthened by the U.S.-China summit last December and developments thereafter.

At the beginning of the summit, Xi took an unexpected action. According to a diplomatic source, he delivered a 35-minute long harangue about Beijing's views on intellectual property rights and high-tech issues the U.S. is concerned about and explained in detail how China plans to tackle these issues.

China had hoped to alleviate trade disputes with the U.S. by winning President Donald Trump over to its side. But that hope ended in disappointment. In the U.S. government and Congress, hardliners on China are gaining momentum and it is becoming clear that getting a concession from Trump will not be easy.

Under the situation, it is certain that Xi is trying to overcome the pressure from the U.S. by strengthening its relations with Japan.

However, Trump may not be the only reason, and there seems to be a deeper motivation behind China approaching Japan. Long before Trump took power, there were moves to seek an opportunity to improve Japan-China relations.

According to Japanese and Chinese government officials, since the end of 2012, when Shinzo Abe became prime minister for the second time, senior officials of the two countries have been secretly in contact with each other and negotiating to improve their relations by reaching a certain level of understanding of the Senkaku Islands and other issues.

A memorandum of understanding was drafted and sent to close aides to Abe and Xi in March 2013. They did not reach an understanding immediately but the first summit between the two leaders took place in November 2014, paving the way for preventing the ongoing conflict from escalating. 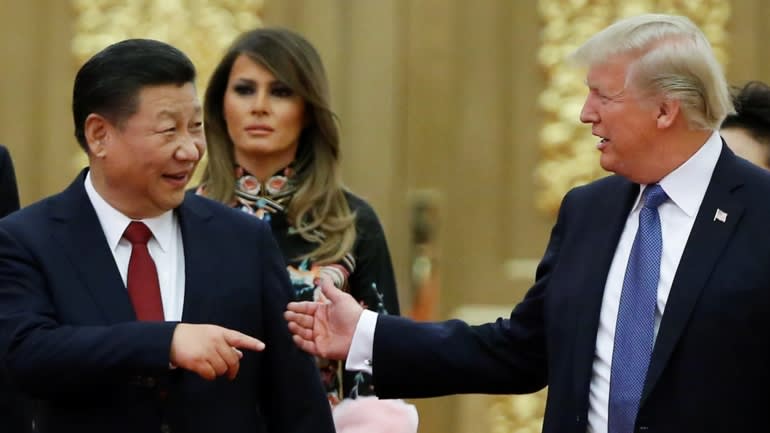 U.S. President Donald Trump and China's President Xi Jinping in November 2017. China had hoped to alleviate trade disputes with the U.S. by winning Trump over to its side, but that hope ended in disappointment.   © Reuters

The next turning point was May 2017. Abe sent Liberal Democratic Party Secretary-General Toshihiro Nikai to China's Belt and Road Initiative conference and entrusted to him a letter to Xi. In response, Xi expressed his intention to resume his interaction with Abe, including his visit to Japan, setting the stage for restoring relations.

The third turning point was a phone call between Abe and Xi on May 4, 2018, the first between a Chinese president and a Japanese prime minister. Japan had secretly sounded out the idea several times. China was initially cautious, but eventually accepted Japan's offer.

The conversation between Abe and Xi lasted for about 40 minutes, during which they agreed to make further improvements. For China, it meant more than that. That country's leadership took the opportunity to boost interaction between senior officials of the two countries by interpreting the phone call as the green light from Xi for normalization and passing the message to the Communist Party.

These developments show what prompted China to repair its relations with Japan was not just the effect brought by Trump. The improvement in Japan-China relations seems to carry greater weight than simply keeping the U.S. in check.

There seem to be two reasons China is trying to build rapport with Japan. One is a lesson China learned from a mistake -- it has dug a hole for itself by taking too aggressive action in the East China Sea and the South China Sea since 2012. As a result, the Japan-U.S. alliance and the alliance among Japan, the U.S., Australia and India have been strengthened, which China perceives as network against it. Consequently, China is changing tack to come between Japan and the U.S. by making an effort to resolve conflicts and improve its relations with Japan.

Another reason for China approaching Japan is that China's top leaders are taking note of the value of using Japan amid slowing economic growth and the aging and declining birthrate over the past several years. To maintain stability, China must put in place social welfare systems such as pensions and medical care as soon as possible. In this regard, cooperation with Japan, a country more experienced in this area, would be helpful. China and Japan inch closer for insurance against Hurricane Trump

If that is the case, even if Trump steps down, momentum to boost Japan-China relations will not immediately slow. But proving it depends on the conflict between the U.S. and China not getting worse and escalating into a new Cold War.

If the competition for hegemony in security between the U.S. and China intensifies, it will shake the foundations of Japan-China relations. As an ally, Japan has no choice but to go along with the U.S., and doing so serves its national interest.

The above scenario cannot be ruled out completely, given the fierce rivalry between the U.S. and China over the high-tech business and the maritime order. That is precisely why it is important for Japan and China to deepen their relations now and ensure that their relations are not easily broken.