Trump's rise awakens Japan to the potential of online politics Japan has still not adopted an effective policy on the digital economy. But as a result it is also less susceptible to the downsides of the digital revolution, such as deeper social divisions and the rise of unilateralism in the U.S. (AP/Kyodo)
HIROSHI MARUTANI, Nikkei political editorJuly 9, 2019 05:02 JST | Japan
CopyCopied

TOKYO -- The recent Group of 20 summit in Osaka ended up turning into a spectacular theater of digital diplomacy.

On the morning of the last day of the two-day powwow of leaders from the world's top economies, U.S. President Donald Trump used a tweet to invite North Korean leader Kim Jong Un to meet.

Trump's surprise Twitter message broke radical new ground in the tradition-bound, secrecy-oriented world of diplomacy by making the process of arranging a summit highly visible to the global audience. Policymakers in capitals around the globe remained glued to Trump's tweets over the weekend, as did millions of people all over the world.

It was, in a sense, the culmination of a trend born in 2007, when Apple redefined mobile communications by launching the first-generation iPhone and Republican Ron Paul announced his candidacy for president. The Blackberry was all the rage in the U.S. at the time, while in Japan, Prime Minister Shinzo Abe suffered a drubbing in an upper house election that forced him to resign.

In May 2007, an airship flew over Columbia, South Carolina, where a debate among Republican candidates for the presidential nomination was in progress. The airship flew a banner saying, "Ron Paul for President."

The airship, the "Ron Paul Blimp," was a publicity stunt to hype the long-shot Republican campaign of the 71-year-old Texas congressman, who said U.S. forces should withdraw from Iraq and that the U.S. should "leave other countries alone."

In the following year, Paul attracted as much funding as Senator John McCain, the Republican heavyweight who would become the party's presidential candidate to face Barack Obama. True to his nonintervention foreign policy stance, Paul voted against a House resolution calling on Japan to apologize in the so-called comfort women issue. He said it was not an issue for the U.S. and American politicians should focus on making their own country better.

The way Paul appealed to voters is reminiscent of Trump's presidential campaign. Paul was an entertainingly erratic man in his 70s who advocated a narrow policy focus on America's interests.

Trump's America was already in the making. While internet technology was beginning to have an unprecedented effect on the political campaigns and the organizations covering them, online opinion was not as influential as it is today. Ardent supporters of Paul were mostly net-savvy people with unusually strong and specific passions.

While his poll ratings were languishing in the single digits, Paul enjoyed a huge, cult-like online following. He also created a buzz as the first congressman to use the iPhone.

Smartphone technology, embodied by the iPhone, ushered in an era when people could carry around a small but powerful palm-size powerful computer.

As the smartphone became a popular tool for communications and information-gathering, it also became the center of many people's political lives, resulting in the rise of digital politics. The digital revolution born in the U.S. has radically changed the political landscape around the world.

Obama's presidential campaign was also driven by the strategic use of digital tools to engage audiences with complex interactions with the candidate. The same digital dynamics worked to trigger the Arab Spring pro-democracy movement and fuel the growth of populist parties in many countries. The highly personalized nature of the digital space tends to polarize the public on policy issues. The smartphone market grew explosively as if in tandem with the rise of the new unilateralism, which calls for focusing on national self-interest.

This new unilateralism has spawned a new breed of imperialism, marked by efforts to strengthen national power to attain hegemony for self-defined global ends.

Trump came as the most prominent personification of this political trend.

In 2000, then Japanese Prime Minister Keizo Obuchi decided to promote the digital revolution in Japan as his top policy priority.

He came to power as an unpopular leader amid turmoil created by the Asian currency crisis. He was eagerly looking for new policy ideas that could galvanize public support for his administration.

Obuchi talked with top executives at Sony and tried to push through his policy initiative to promote the digital revolution, based on his conversations with business leaders, by exerting strong political leadership at a time when policy development and execution were controlled by bureaucrats and political parties.

As a doyen of the Liberal Democratic Party's posts and telecommunications "clan," Obuchi was confident of his ability to achieve his digital policy goals.

Unfortunately, he was struck down by illness and died in office in May 2000 before accomplishing his agenda.

The post and telecommunications clan, a group of LDP lawmakers with close ties to the communications industry, did not realize the competitive potential of NTT DoCoMo's i-mode wireless communications technology, which appeared to be destined to conquer the world. Obuchi's digital agenda quickly fell into political oblivion.

In November 2000, LDP heavyweight Koichi Kato made a failed attempt to topple the cabinet of then Prime Minister Yoshiro Mori by supporting an opposition no-confidence motion. Kato's misguided rebellion, which dashed his hopes of becoming the LDP's president and prime minister, worked to make Japanese politicians wary of using digital technology for political purposes. In making the risky move in response to online opinion, Kato committed a disastrous political blunder, which convinced many old-fashioned politicians in Nagatacho, Tokyo's political power center, that the internet was a risky political tool they should not play with.

As a result, Japan lagged far behind the global trend among politicians toward strategic use of the internet, causing the Japanese government to be far too slow in its policy responses to both the positive and negative effects of the web. Japan has still failed to adopt an effective policy to promote the digital economy and has consequently remained less susceptible to to downsides of the digital revolution, such as deeper social divisions and the rise of unilateralism. 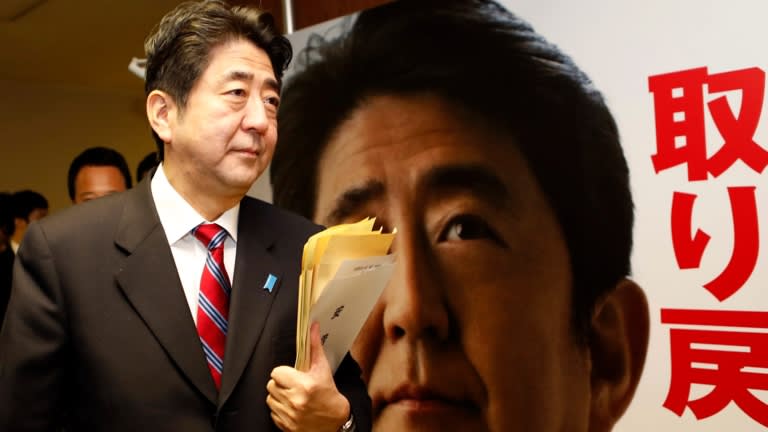 The LDP, led by Shinzo Abe, returned to power with the support of young, internet-savvy voters in 2012.   © Reuters

But the advent of the Trump administration has finally awakened Japan to the potential of digital politics.

Despite its premium price, the iPhone controls half the Japanese smartphone market. Chief Cabinet Secretary Yoshihide Suga has been leading the initiative to reduce mobile phone rates by 40% from the viewpoint of how the government should deal with the power of digital platform operators, especially the heavyweights of GAFA -- Google, Apple, Facebook and Amazon.

Akira Amari, the LDP's chief election strategist, has been instrumental in formulating a set of policy proposals for integrated responses to economic and security challenges.

These two senior ruling party politicians are driven by concerns about the future of Japan, which they believe is now 10-20 years behind leading digital powers like the U.S.

Twelve years since the Ron Paul phenomenon, the political situation in Japan, weeks before the July 21 upper house election, is showing signs of fast and radical change. Populist movements at both ends of the political spectrum seem to be gaining ground.

The upper house poll in 2007 led to the demise of the first Abe government amid a scandal concerning people's pension records. At that time, Japan was completely unaware of the potential of digital politics.

But the upcoming upper house election will be a good opportunity for Japanese politicians and voters to experience and assess both the positive and the negative sides of digital politics, which have transformed political behavior in many countries.