Tokyo has to improve ties with Beijing without angering Washington TOKYO -- The U.S. and China have entered a long tunnel of conflict, while Japan and China are in transition from a long winter to spring. Japan and the U.S. have rarely moved in such opposite directions in their relations with China. Close attention should be paid to the effects this situation will have.

Some Japanese analysts said China's friendlier attitude toward Japan is only transitory, since it is a reaction to its conflict with the Trump administration of the U.S. This analysis, however, is incorrect. The Chinese leadership has sought reconciliation with Japan since the autumn of 2014 partly to prevent a stronger Japan-U.S. alliance.

Although there remain tensions between the two countries over the Senkaku Islands, known as the Diaoyu Islands in China, the trend toward reconciliation will continue after Xi's visit to Japan.

However, foreign policy officials in the Abe government are not unanimous in expressing joy, because they are aware that frictions will arise between Japan and the U.S. if the two countries' relations with China continue to go in opposite directions.

U.S.-China-Japan relations like the current situation has rarely arisen since Japan and the U.S. both normalized their relations with China in the 1970s. During the Cold War, the U.S. and China promoted military cooperation against the Soviet Union, their common enemy, and, as a former high-ranking U.S. government official says, they maintained a relationship that could practically be called a quasi-alliance.

The friendly relationship between the U.S. and China did not weaken even after the collapse of the Soviet Union. Their efforts to deal with the North Korea crisis and their expanding business relations have worked as a new attraction that kept them together. Their relationship changed in the mid-2010s when China ceased to conceal its ambitions to increase its maritime military presence and attain high-tech supremacy. 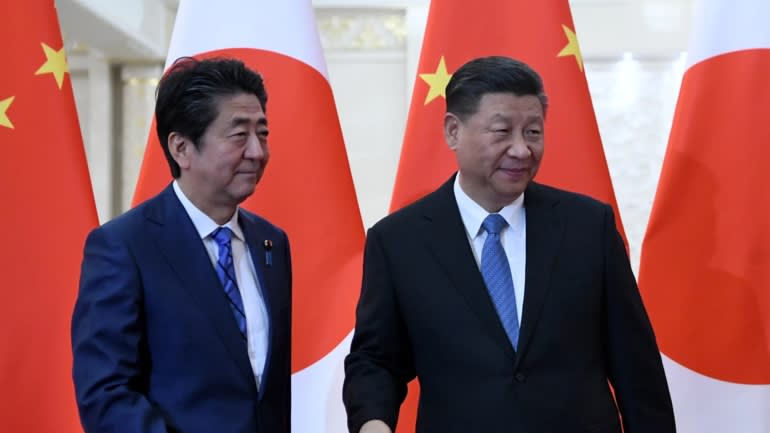 Abe and Xi in Beijing on Dec. 23, 2019. If Japan conforms to the U.S. strategy, China will get angry and Japan's relations with China will become tense again.   © Reuters

Meanwhile, Japan's relationship with China has been hurt by historical issues. Since 2012, their dispute over the Senkaku Islands has deteriorated, and their relationship has been worse than the U.S.-China relationship. There have been few exceptions to this, including the period following the Tiananmen Square crackdown in 1989, when a rift between Washington and Beijing worsened. In that situation, Japan was worried that the U.S. and China might secretly strike deals on important issues, leaving Japan in the dark.

However, Japan will henceforth be faced with even more difficult challenges. The struggle for supremacy between the U.S. and China will likely continue for at least next 10 years and Washington will toughen its policies on China in all respects.

The U.S. will undoubtedly ask Japan and other allies to cooperate in such policies. The country may not only exclude Chinese companies from its key infrastructure but may ask Japanese high-tech companies and research facilities not to cooperate with their Chinese counterparts.

If Japan conforms to the U.S. strategy, China will get angry and Japan's relations with China will become tense again. On the other hand, if Japan hesitates to go along with the U.S., Washington will be offended and Japan-U.S. ties will be disrupted.

What should Japan do? The thing it must avoid above all else is to try to please both sides. Since the country depends on the U.S.-Japan alliance for its defense, it should prefer the U.S., not China. The lesson of the Tripartite Pact between Japan, Germany and Italy before World War II shows what can result from choosing the wrong partner.

Japan and China discontinued reciprocal visits by their national leaders, and the Chinese president has not officially visited Japan for more than 10 years. The countries are just trying to improve their negative relations to be neither negative nor positive. Japan's alliance with the U.S. is the immovable linchpin of its foreign policy.

The Abe administration said so when it meticulously explained Japan's reconciliation with China to Washington behind the scenes. At present, the U.S. seems to understand Japan's position and there are no open frictions between them. A high-ranking U.S. government official said it was good for Japan and China to ease the tension between them and that the U.S. was not worried that Japan and China might become closer than that. Abe and Trump in New York on Sept. 25, 2019. If human rights issues worsen in China, Washington may criticize Japan for welcoming Xi as a state guest and entertaining him with a military salute and a banquet at the Imperial Palace.    © Reuters

The question is how Japan will act from now on. Protest demonstrations in Hong Kong are unlikely to come to an end. In the U.S., criticisms against China's crackdown on the Uighurs in the Xinjiang region are also growing, and the lower house of Congress has passed a bill on sanctions against China. If the situations in both regions become more strained, Washington may criticize Japan for welcoming Xi as a state guest and entertaining him with a military salute and a banquet at the Imperial Palace.

If it really serves Japan's national interest, the government should invite Xi as planned and promote the improvement of bilateral relations. Japan cannot endure strained relations with China, which has greater military and economic power.

Nevertheless, if Japan's relationship with the U.S. is impaired while its relationship with China improves, Japan would be losing more than it gains. Japan's diplomatic power will weaken and China could become bolder about the Senkakus. The failed policy of the Hatoyama government of the former Democratic Party of Japan showed that.

The best course of action for Japan is to pursue the improvement of its relations with China, as long as its relations with the U.S. remain intact. From the standpoint of the U.S., the line it does not want Japan to cross is clear. When I asked people inside policy circles in Washington about this matter, I got the following replies:

None of these actions would not benefit Japan either. The U.S. sanctions are aimed at preventing China's infringements of intellectual property rights and pressuring Beijing to change its state capitalist policies.

Japan should first aim at getting results that lead to regional stability. Japan and China reached an agreement on the joint development of gas fields in 2008 to prevent disputes in the East China Sea, but it was not put it into practice. Realizing the accord is a high priority, as is setting up a hotline between the defense chiefs of the two countries.

Xi surely wants to make his state visit to Japan a success by any means. Japan is at an advantage in negotiations; this position should not be wasted.