US-China trade war is battle for tech hegemony in disguise

Washington fears loss of both economic supremacy and security The trade war between the U.S. and China is fundamentally a conflict over security.   © Reuters
HIROYUKI AKITA, Nikkei commentatorAugust 19, 2018 14:48 JST | China
CopyCopied

TOKYO -- An all-out trade war between the U.S. and China is looming large with the annual value of Chinese products subject to U.S. punitive import tariffs rising to $50 billion on Aug. 23.

President Donald Trump's administration has similar trade sanctions in its sights for half the nation's imports from China. What is Trump aiming for? How far will he go?

Many observers think Trump is bashing China mainly for votes ahead of midterm elections in early November. They also think that if he makes progress cutting the trade deficit, he will be satisfied and stop fighting for a while.

According to them, Trump is involved in a "political performance," and will bury the hatchet with China sooner or later.

I don’t think so. It is true that Trump’s policies include some election-related elements, but I feel that this confrontation is more than just trade friction. It is turning into a war for supremacy in which the rise of a great power is at stake.

The U.S. wants to prevent China from challenging its digital supremacy, and will deliberately try to derail Made in China 2025 -- the industrial policy meant to establish China as a high-tech superpower. 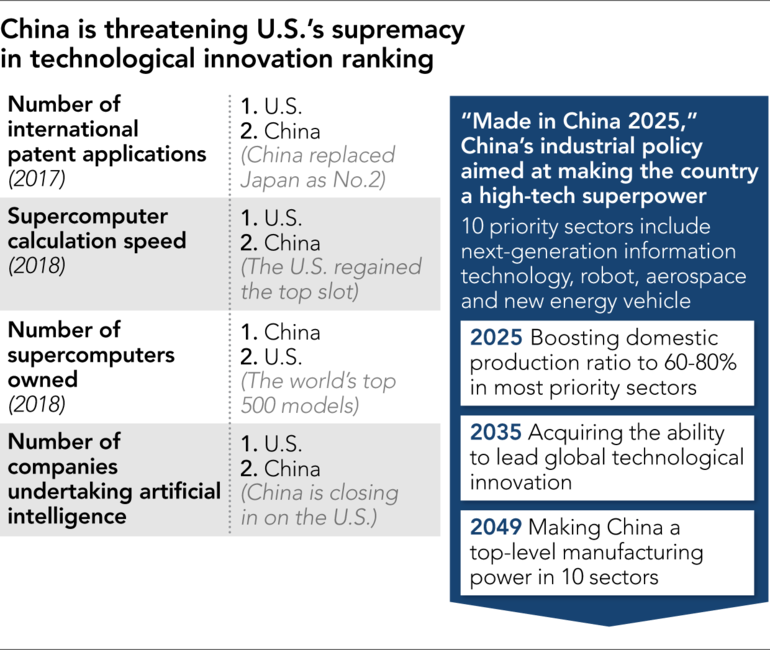 This is fundamentally a conflict over security. Indeed, the U.S. justified the punitive import tariffs on $50 billion worth of Chinese products on the grounds of violations related to high technology and intellectual property rights, not the trade deficit.

China's transgressions, according to the U.S. administration, included theft of high technology in cyberspace and elsewhere; foreign companies being forced into making technology transfers; and large Chinese government subsidies to domestic technology companies.

According to one senior U.S. government official involved in trade policy, until China changes such "unfair" practices, the U.S. will not ease sanctions, even if the trade imbalance narrows.

The U.S. departments of defense and commerce, are leading the charge, and Congress supports the main aims of the policy. It is a trade war supported by all of America, not by Trump alone.

The U.S. fears losing its supremacy in artificial intelligence and other digital technologies to China, and eventually losing military and industrial supremacy.

In June 2017, the U.S. defense establishment was taken aback when China conducted a flight and operation test for 119 drones, demonstrating a technological capability that outstrips the U.S.

According to one adviser to the Department of Defense, there are concerns there that China will deploy AI-powered drones and unmanned submarines in large numbers, making it harder for U.S. aircraft carriers and other vessels to operate freely in Asia. This would change the balance of power between the two countries.

China is obviously aware that the U.S. has resorted to trade sanctions not simply to reduce the trade deficit.

According to sources familiar with Sino-U. S. relations, President Xi Jinping has been sounding the U.S. out on a planned spending spree to purchase huge quantities of American products. This bid to circumvent U.S. sanctions has surfaced at least three times since last year, the sources said. China's proposed largesse was well received by some members of the cabinet in Washington, but rebuffed by Trump himself.

While there seems to be some criticism of Xi among Chinese Communist Party elders for failing to rein in the trade war with the U.S., the Made in China 2025 campaign is a national strategy advocated by the president. There is no way that Xi can bow to U.S. pressure and back off. The trade war that has just broken out is also likely to continue into the post-Trump era.

"When the U.S. government released a new national security strategy in December 2017, it came up with the concept of national security innovation base," said Tetsuo Kotani, an associate professor at Japan’s Meikai University. "It is a policy to strengthen the high-tech innovation base in order to win strategic competition with China and Russia. In this context, the U.S. administration has now imposed sanctions on China and is trying to protect its high-tech base. Although it looks like a trade war with China, it is part of long-term [U.S.] security strategy. The U.S. will cope with long-term competition with China by boosting its innovation capability while preventing its high technology from being stolen." China and US to restart trade talks as tariffs add up

How should Asia and Europe react to all this?

China’s technological espionage and forcible transfer of high technology are common concerns among the international community, and these are issues Japan, the U.S., and Europe should tackle together. But the Trump administration has slapped punitive tariffs on steel and aluminum imports from Japan and Europe, and is even threatening to impose such tariffs on auto imports. Under such circumstances, little momentum has been generated for a collective response to China.

However, sooner or later Japan and Europe will come under pressure to respond as the China-U. S. struggle intensifies. A key issue will be tougher controls on advanced technology transfers to China, particularly military. The U.S. will want to be sure that information and technology supplied to its allies does not flow on to China. The U.K. and Germany have already increased restrictions on Chinese investment in their high technology sectors, and Japan may consider following suit.

Furthermore, the administration and Congress are moving to effectively shut out Chinese telecommunication equipment makers with close links to the Chinese government from the U.S. market in order to prevent information leakages. In late April, for example, regulations were introduced that make it difficult for American companies to purchase equipment made by China’s Huawei Technologies. The Senate has passed a bill banning the use of products made by Chinese companies such as Huawei and ZTE by government organizations or companies doing business with the U.S. government. Trump signed this bill just recently.

Will the U.S. acquiesce to China’s technology ambitions so long as it complies with international regulations, or oppose it on security grounds?

And how far will Japan and Europe go along? They will face the same questions sooner or later.