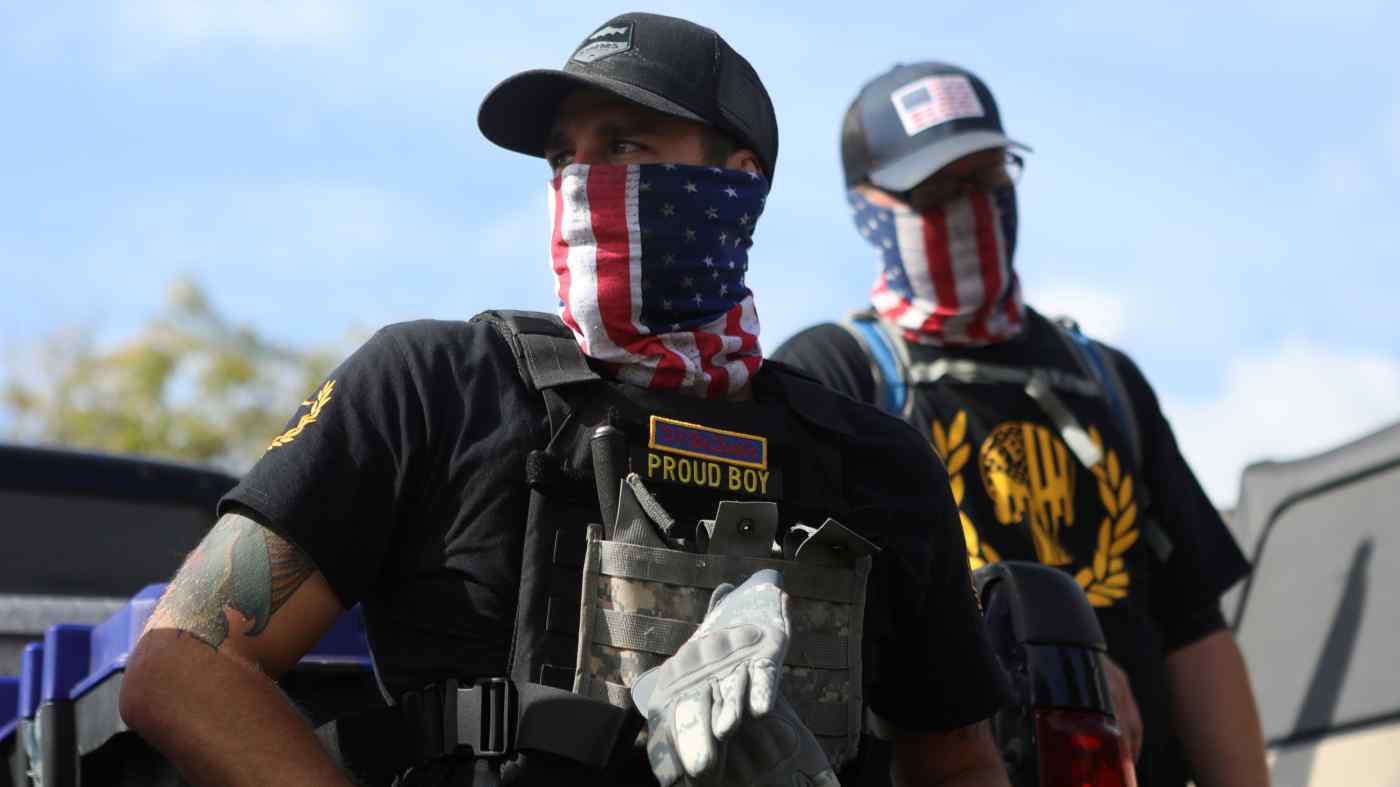 TOKYO -- The American presidential election on Nov. 3 is shaping up as a radical break from conventional wisdom. A close vote would likely be followed by fierce legal wrangling, leaving the result undetermined for days or weeks. Many U.S. experts warn of this possibility.

But something even worse might happen. Even with a decisive outcome, the transfer of power may be neither peaceful nor smooth.

The worst-case scenario could materialize if Republican incumbent Donald Trump loses by a narrow margin: protracted post-election unrest marked by violent protests across the nation by pro-Trump groups on the far right.

This possibility of a crisis -- by no means a certainty but definitely not impossible -- should disquiet many both inside and outside the U.S. Instead of simply trying to read the political tea leaves to predict the election result, Asian and European countries should ready themselves to absorb and respond to the enormous foreign policy implications of America's deep and bitter political rift.

There have been shocking revelations about a foiled plot to abduct a state governor. Six men have been arrested and charged with conspiring to kidnap Democratic Gov. Gretchen Whitmer of Michigan, the Justice Department announced Oct. 8. They reportedly belong to an armed anti-government group with far-right political views. They were apparently angered by restrictions Whitmer imposed on businesses and residents as she tried to slow the spread of the new coronavirus in a clear dissent from how the Trump administration has dealt with the pandemic.

It would be wrong to dismiss the revelations as an isolated case involving far-right extremists. The long-standing and deep-rooted political war between liberals and conservatives in the U.S. has intensified in recent years, growing more acrimonious and violent. It has been further compounded by the hot-button issue of racial discrimination against African Americans.

Since late August, fatal confrontations between radical leftists and far-rightists have occurred in the states of Wisconsin and Oregon during protests over shootings of Black people by police. Similar incidents have broken out elsewhere.

Most protesters reject violence. But small groups of extremists can incite violence during demonstrations.

The FBI is especially alert to the security threats posed by far-right forces, including white supremacists, anti-gun-control groups, people angry over COVID-19 restrictions, and misogynists.

Terrorist attacks by far-right groups have increased sharply in the U.S., according to a mid-June report by the Center for Strategic and International Studies. Attacks and plots involving right-wing groups numbered fewer than 20 a year between 2000 and 2013, according to the report. By the 2017-19 period, the annual tally had jumped around 30 to 50. From Jan. 1 to May 8 this year, right-wing extremists in the U.S. committed over 90% of the attacks and plots. 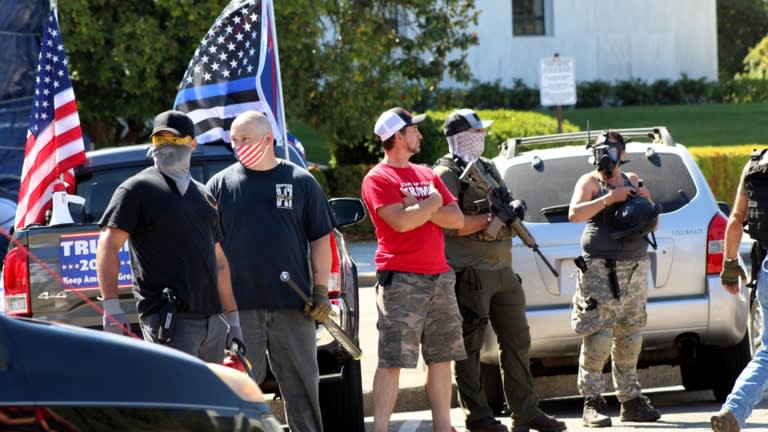 Armed supporters of President Donald Trump stand in front of the Oregon State Capitol in Salem on Sept. 7.   © AP

Seth Jones, director of the Transnational Threats Project at CSIS, points to a number of key drivers.

"There are at least three factors that are accelerating far-right terrorism," he says. "First, during the former Obama administration, white supremacists had growing concerns about a Black president and became more active in recruiting new members. Second, far-right extremists have become emboldened under President Trump. And thirdly, the violent far-right has increasingly used digital platforms to communicate, recruit, fundraise and issue propaganda."

"If [Democratic nominee Joe] Biden wins the election, there is a danger that far-right extremists will attempt to conduct firearms attacks against Blacks, Jews, immigrants and others," Jones warns. "It is also possible that they will plot attacks against government officials, as we saw in Michigan with a group of militia that plotted to kidnap the Michigan governor."

This is not a far-fetched scenario. In June, the nonpartisan Transition Integrity Project privately ran exercises to simulate possible post-election crises. More than 100 people in political circles took part.

Four realistic scenarios were simulated: a clear win by Biden, a narrow Biden win, a win by Trump, and an ambiguous result. Participants were divided into the Trump campaign, the Biden campaign, career government and military employees, and other teams for the simulations.

The simulations produced some spine-chilling results. Under any scenario, except a wide Biden victory, Americans will see a blizzard of disinformation and outbreaks of violence on the streets in many parts of the nation. The worst-case scenario would leave the country without an authoritative result up until Inauguration Day, Jan. 20.

Trump could invoke the Insurrection Act and attempt to use the military to suppress protests. He might also refuse to vacate the Oval Office if he loses and have to be escorted from the White House by the Secret Service.

One independent participant said the possibility of Trump rejecting the election result if he loses was within the scope of the assumptions. But the simulations also indicated a possibility of Biden refusing to readily accept his own defeat, leaving the nation gripped by prolonged corrosive conflict, the source said. Early voters bundle up and line up to cast ballots at the South Regional Library polling site in Durham, North Carolina, on Oct. 15.   © AP

If both sides get embroiled in legal fighting over the election outcome, the Supreme Court will likely be cautious about making any political decision. The dispute over the winner could then develop into a full-fledged constitutional crisis fraught with dangerous tensions.

Simply put, the 1861-65 Civil War was triggered by the escalation of a constitutional clash over slavery. Few U.S. experts expect the political struggle to escalate into large-scale armed conflict in the near future. But over the long term, there is no ruling out the possibility of a serious constitutional crisis driving up domestic tensions to a level that could set the stage for a second Civil War.

Kansai University visiting professor Hirotsugu Aida, an expert in American politics, sees many parallels between the current situation in the U.S. and the pre-Civil War era.

"The Civil War was caused by a constitutional conflict over the powers of the federal and state governments concerning slavery and tariffs," Aida points out.

"The current political divide and constitutional crisis have a similar degree of seriousness," he says. "Armed clashes are already occurring in many parts of the nation, while foreign interference by countries like Russia has made the U.S. an effective battleground for international information warfare."

Foreign interference in the election is assuming grave seriousness. The government worries that Moscow is trying not only to influence the election itself but also to instigate violence.

"Russia has been building connections to U.S. far-right groups for decades in an attempt to disrupt U.S. society," says Paul Goldstein, president and CEO of U.S. consultancy PTB Global Advisors.

A Trump or Biden landslide could avert the feared massive crisis. But it would not resolve such underlying conditions as income inequality and racial tensions.

Many U.S. allies in the Indo-Pacific region and Europe, threatened by increasingly aggressive behavior by China and Russia, are hoping for a Biden administration to revive the American commitment to the security of its friends and multilateral security cooperation. Biden would doubtless declare an effort to repair strained alliances. But this would not mean going back to being "the world's policeman."

Whoever wins the election will have to make starting the healing process at home his top priority. Allies abroad would be better advised to start preparing themselves to take on more of the burden for security to maintain global stability.