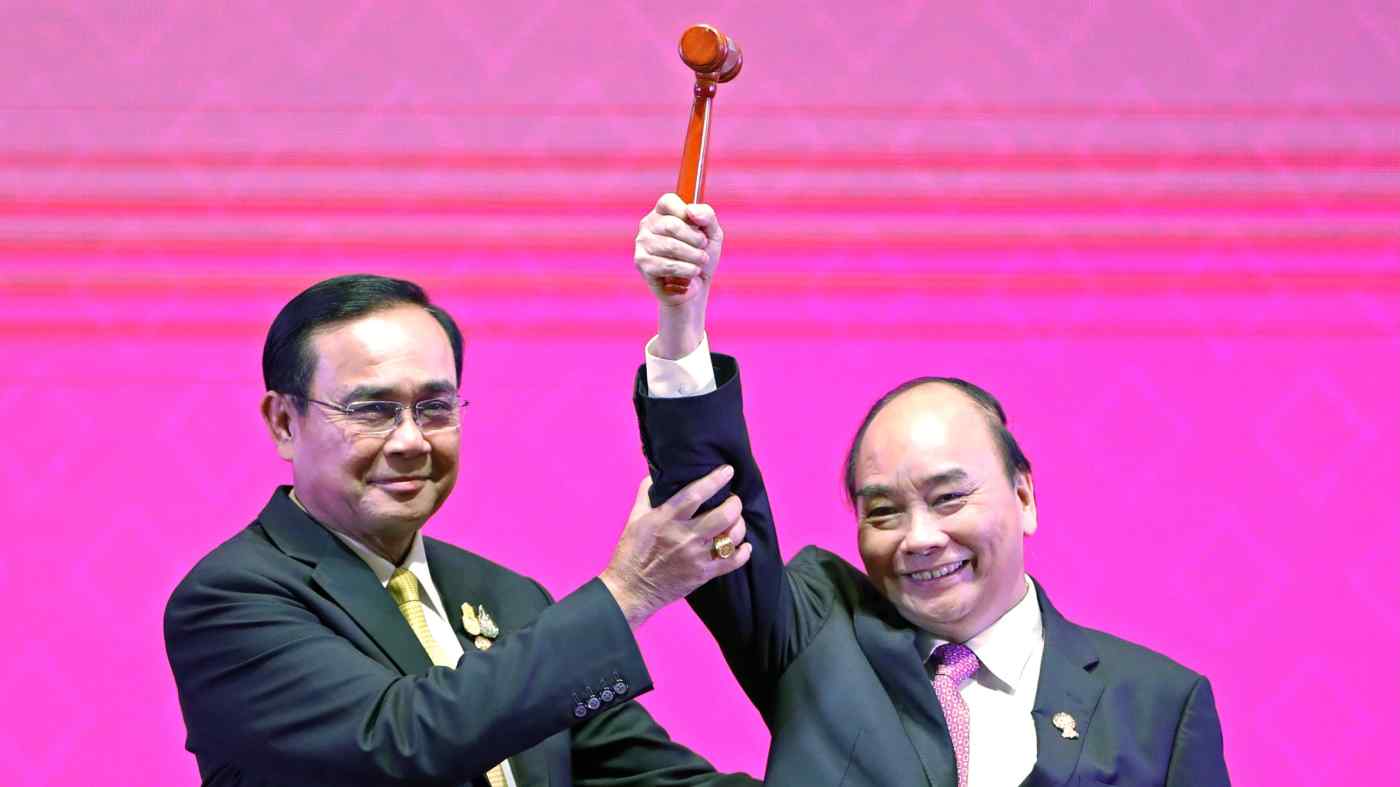 BANGKOK -- Vietnam's ambitions to raise its stature in Southeast Asia and the broader international community as the chair of ASEAN this year have been derailed by the coronavirus pandemic, which has disrupted interactions between people and nations.

Vietnam, which holds the regional group's annually rotating chairmanship this year, has postponed the 36th summit of the 10-member Association of Southeast Asian Nations to the end of June, which was originally scheduled to take place on April 8-9 in the central Vietnamese resort of Danang. Prime Minister Nguyen Xuan Phuc has informed the leaders of ASEAN about the decision to push back the summit due to the outbreak, the Foreign Ministry said recently.

The ASEAN Summit, the group's biggest decision-making event, is held twice annually, usually in April and November. The spring summit, in which only ASEAN members take part, is where the bloc discusses its diplomatic agenda and strategy to prepare for the larger meetings in autumn--e.g. the East Asia Summit, a forum that brings together the ASEAN members, plus eight other countries, including Japan, the U.S., China and India.

The number of COVID-19 cases in Southeast Asia began soaring in mid-March which led to lockdowns in cities in Malaysia and the Philippines. Other ASEAN nations followed suit, closing borders and restricting travel, making Vietnam's decision to put off the summit inevitable.

As a result, the pandemic threatens to gum up ASEAN's diplomatic schedule. The group normally holds nearly 1,000 meetings a year, highlighted by the biannual summit.

Vietnam's ASEAN chairmanship in 2020 has significant geopolitical implications for the country and ASEAN as a whole.

Vietnam joined the group in 1995. For decades, the Cold War kept it outside the group. But since it became a member, Vietnam has played an increasingly important role in ASEAN, including two previous terms as chair, in 1998 and 2010. This has allowed it to push a number of its priorities, in particular, creating new institutions and expanding the region's ties with other powers.

Vietnam's ASEAN chairmanship this year, which also marks its 25th year as a member, is crucial to negotiations for the Regional Comprehensive Economic Partnership. RCEP is a free trade grouping encompassing ASEAN and other major trading nations in East Asia and beyond, including China, Japan, India and South Korea. But trade watchers say RCEP must become a reality this year if it is to stem a protectionist tide that could grow due to the pandemic.

This year presents Vietnam with other important diplomatic opportunities and challenges. It will serve as one of the 10 nonpermanent members of the U.N. Security Council in 2020 and 2021.

When it last held the reins in ASEAN back in 2010, Vietnam pulled off a number of diplomatic feats, including bringing the U.S. and Russia into the East Asia Summit, and hosting the inaugural ASEAN Defense Ministers Meeting-Plus.

The ADMM-Plus meetings are the only official framework that brings together top defense officials from the Asia-Pacific region. The ADMM-Plus has been held every three years since 2010 and have seen a number of contentious, high-profile debates involving both Washington and Beijing.

That year, ASEAN was also in the last lap of negotiations to create the ASEAN Economic Community, which works for regional economic integration and was launched five years later. But Vietnam's chairmanship was more focused on ASEAN's outward expansion, a reflection of the country's unique position in the grouping. 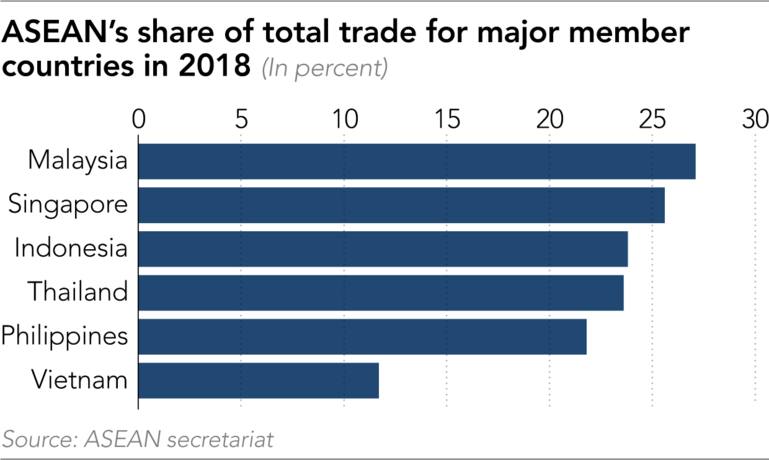 That position is apparent in the trade data. Intra-ASEAN trade accounts for just over 10% of Vietnam's total cross-border exchange of capital, goods and services, compared with 20% to 30% for the five original ASEAN members -- Indonesia, Singapore, Thailand, the Philippines and Malaysia. Vietnam's economic growth depends more on its links to big markets outside ASEAN, mainly the U.S. and Europe, than on regional trade.

After joining the World Trade Organization in 2007, Vietnam launched a spirited diplomatic campaign to conclude free trade agreements with its major trading partners. Unlike most other emerging countries, Vietnam has been willing to seek deals with industrial nations, which generally demand a high degree of liberalization in return for lowering their own trade barriers.

Vietnam joined the negotiations for the Trans-Pacific Partnership, a free-trade pact involving Pacific-Rim nations, in 2010. Vietnam has also reached a free trade accord with the European Union that will take effect this year. It has 13 such agreements in place or on the way, including one with the Eurasian Economic Union, an economic grouping led by Russia.

Vietnam, however, has taken a more cautious stance toward the AEC, which is supposed to be ASEAN's crown jewel.

"Vietnam has failed to make the most of the AEC," said Shozo Sakata at the Japan External Trade Organization's Institute of Developing Economies' Bangkok Research Center. Vietnam is wary of the AEC because it threatens the country's domestic auto industry by allowing Thailand and Indonesia to export cars to its neighbor tariff-free, according to Sakata.

ASEAN's principal strategic value is its potential to present a united front against China's naval expansion in the South China Sea. While only four ASEAN members -- Vietnam, the Philippines, Malaysia and Brunei -- are involved directly in the territorial dispute with China, ASEAN, which has reiterated concerns over the dispute in numerous statements for many years, sees Beijing's attempt to assert control over the entire South China Sea as the biggest threat to its security. Vietnam has been the most vocal critic in ASEAN of China's naval aspirations, and it has no choice but to work through the group to counterbalance the Asian giant.

That grim reality motivated Vietnam's successful effort to broaden the EAS to include the U.S. and Russia when it last served as ASEAN's chair in 2010.

Vietnam's relationship with ASEAN was once more troubled. The group originally established as a bulwark against the spread of communism. At ASEAN's founding meeting in Bangkok in 1967, Singapore's first foreign minister, S. Rajaratnam, famously said, "If we do not hang together, we will all hang separately," sounding the alarm over communist infiltration.

The Vietnam War ended in 1975 with the fall of Saigon, or Reunification Day from Hanoi's point of view, marking the victory of North Vietnam in its long struggle against the U.S.-supported South

In the same year, communist rule spread to Laos and Cambodia, raising fears that all of Southeast Asia would fall under its sway -- the so-called domino effect. That looming threat united ASEAN countries in opposition.

In 1979, Vietnam became embroiled in a border war with China, another member of the communist bloc. With the 1989 collapse of the Berlin Wall, the end of the Cold War and the dissolution of the Soviet Union a year later, Hanoi began to see ASEAN as a potential ally in confronting China.

Kishore Mabubhani, a former permanent secretary of Singapore's Foreign Ministry, who also served as dean of the National University of Singapore's Lee Kuan Yew School of Public Policy, has called Vietnam's decision to join ASEAN in 1995 "one of the biggest ironies in history."

This year, when it again hosts the ASEAN summits, Vietnam hopes to regain the initiative in formulating the code of conduct aimed at reducing tensions in the South China Sea.

But there is little doubt that the galloping coronavirus will force Vietnam to focus more on internal cooperation than on ASEAN's relations with the outside world, at least for the time being.

The outbreak, which traces back to China, appears to be under control in the country. Now Beijing is wooing ASEAN with medical aid. After the crisis ends, it is likely to offer large dollops of financial assistance. Its charm offensive will sorely test Vietnam's strategic prowess and finesse.