BANGKOK -- China and the Association of Southeast Asian Nations have made "major progress" in talks over a code of conduct aimed at reducing tensions in the South China Sea, according to China's Foreign Minister Wang Yi.

Speaking at a news conference in Bangkok after the annual China-ASEAN foreign ministers meeting on July 31, Wang attributed the momentum to the "sincerity and resolve of all parties."

"It marks new, major progress in the COC consultations and an important step toward the goal of concluding the consultations within three years," Wang said. Wang stressed that the first stage of work on the code of conduct, which will regulate activities by China and ASEAN in the South China Sea, has been completed ahead of schedule.

China and ASEAN agreed to begin full-scale negotiations on the agreement in May 2017 and compiled a draft text listing each country's position at their foreign ministers meeting last August. The latest meeting approved a streamlined draft.

The two sides had initially aimed to complete the first stage of work on the agreement by the end of this year, so they are well ahead of schedule. But streamlining the text was the easy part. While China played up the rapid movement, ASEAN appears less enthusiastic.

No wonder. China has continued its saber-rattling in the South China Sea, even as it has negotiated, and the timing of its actions seems designed to pile on the pressure. Chinese President Xi Jinping presided over a massive naval display in the South China Sea in April 2018, just before an ASEAN summit meeting, for example. Chinese Foreign Minister Wang Yi, center, poses with his counterparts at the ASEAN Regional Forum in Bangkok on Aug 2.   © Reuters

This year, China test-fired six anti-ship ballistic missiles in the waterway between the end of June and early July, ahead of the annual ASEAN Regional Forum on security in Bangkok. The forum was attended by ministers from Japan, the U.S., Australia, South Korea and other countries.

On July 24, China published its first white paper on defense in four years. It claimed in the document that the South China Sea was an "inalienable" part of its territory, and that China "exercises its national sovereignty to build infrastructure and deploy necessary defensive capabilities on the islands and reefs in the South China Sea."

Beijing has shown no sign of letting up on its land reclamation and construction of military facilities in the area. It is thought to have already built storage for ammunition and fuel, radar facilities, and runways up to 3,000 meters long on Fiery Cross Reef, Subi Reef and Mischief Reef.

Against this backdrop of muscle-flexing, China began looking for oil in Vietnam's exclusive economic zone in July. Chinese and Philippine fishing boats also collided in the Philippines' EEZ in June. Around 20 Philippine fishermen were thrown into the sea in that incident. The code of conduct is supposed to provide a framework for resolving such disputes and incidents through dialogue.

Four ASEAN members -- Vietnam, the Philippines, Malaysia and Brunei -- are locked in territorial disputes with China in the South China Sea. The other six ASEAN members are not directly involved.

But ASEAN as a group has called for the talks on the code of conduct to be completed quickly, as it regards the frictions with China in the South China Sea as a regional issue. Beijing had dragged its feet until recently, claiming the territorial rows were bilateral issues between it and each of the four ASEAN members.

But now the positions seem to have flipped. China appears a bit keener on the code than ASEAN. Why?

China claims a large swath of the South China Sea -- an area encompassed by its "nine-dash line." But an international arbitration panel in The Hague, Netherlands, rejected China's claim in a high-profile case brought by the Philippines in July 2016. The tribunal ruled that the nine-dash line had no basis in international law, basing its decision on the U.N. Convention on the Law of the Sea, or Unclos. 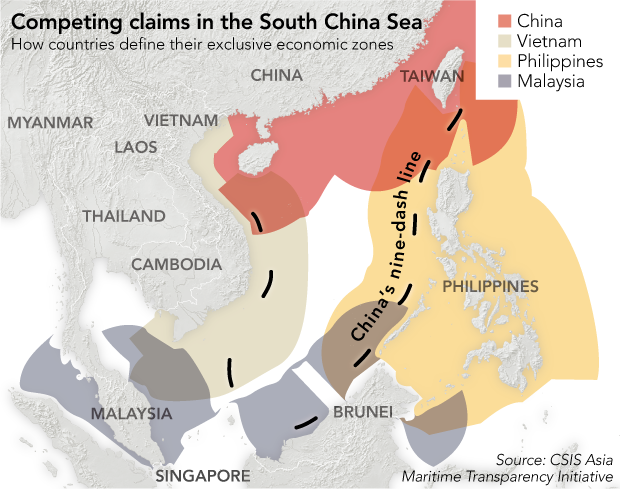 China has ignored the ruling, but as a signatory to the U.N. treaty it is uncomfortable being seen as an outlaw. China apparently believes it can use the code of conduct to extricate itself from the ruling.

Tensions in the Taiwan Strait arising from Beijing's confrontation with the U.S. are another contributing factor. China is eager to wrap up a deal with ASEAN over the South China Sea so it can focus on Washington.

Despite China's apparent change of heart on the code of conduct, it is too soon to view it as a victory for compromise. China's ulterior motives are reflected in the framework of the negotiations.

First, it is not ASEAN as a whole but the 10 individual ASEAN countries that China is negotiating with. The text of the agreement in the first stage of the drafting process was treated as 11 separate proposals, one from China and one from each ASEAN member, rather than as two proposals -- one from China and the other from ASEAN.

ASEAN is working to create a single community. It typically speaks with one voice in external negotiations. According to a diplomatic source, ASEAN members are currently negotiating only two pacts with other countries as individual nations: the code of conduct and the Regional Comprehensive Economic Partnership, an Asian free trade agreement involving 16 countries.

China pressed hard for the 11-party arrangement when talks for the code of conduct were launched, the diplomatic source said. That reflected China's position the territorial disputes are bilateral issues between it and each of the four ASEAN members concerned. This approach maximizes its leverage and allows it to flex its muscles, if necessary, to get its own way. 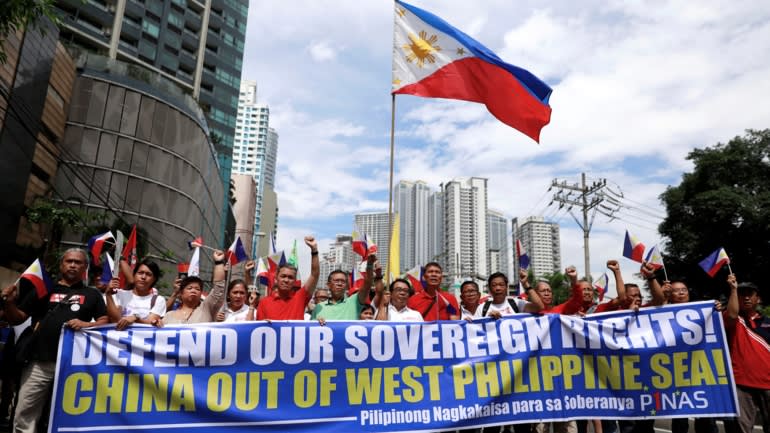 Filipino demonstrators protest the presence of Chinese ships in South China Sea at the Chinese Embassy in Makati City, Philippines on April 9.   © Reuters

The Philippines has served as the ASEAN coordinator for dialogue with China since 2018. China apparently wants to finish drafting the code of conduct before the Philippines' chairmanship expires in 2021.

Unlike his predecessor, who took a firm line on the Philippines' territorial dispute with China, President Rodrigo Duterte taken a softer position, hoping to win economic aid from Beijing. Duterte took office shortly before the international arbitration tribunal's ruling against China.

ASEAN cannot accept these demands because they would invalidate the tribunal's ruling on China's nine-dash line, and because they are aimed at curtailing the regional influence of the U.S. and Europe. "ASEAN is in no rush, and has no intention to finalize the COC by compromising strangely," one diplomatic source said.

Unlike the first stage of the drafting work, which was simply to read through the text, ASEAN and China will face difficult negotiations to bridge the huge gaps in their positions. China uses banana diplomacy in Philippines to edge out Japan

ASEAN faces the challenge of maintaining a united front over the South China Sea, as there are some members, such as Cambodia, who are more favorably disposed toward Beijing's position.

The code of conduct is supposed to govern the activities of signatories in the South China Sea. But if ASEAN makes a hasty compromise its position will weaken. It could find itself bound by an agreement that gives China carte blanche in the region.

The question is whether and how ASEAN can maintain unity without yielding to intimidation by China. The talks will test the Southeast Asian group's raison d'etre.