BANGKOK -- Despite hoarding their beans and fighting a drought, Vietnamese coffee farmers are finding that a healthy crop in Brazil could still put pressure on market prices.

Any supply squeeze brought on by Vietnam's actions and situation will be offset by Brazil's crop. Coffee trading house I & M Smith forecast on July 28 that Brazil will produce 50.4 million bags of coffee this year, marginally lower than last year's 51.2 million. A bag is equal to 60kg of green coffee beans.

Vietnam's annual coffee crop this year is forecast to be similar to 2014's 29.4 million bags, according to commodities website Indexmundi.com. Yet its exports for the first six months of the year were down 36% on the year, based on local customs data.

This points to a great deal of stockpiling, a common way of hedging against -- and trying to influence -- price movements.

Prices for the robusta variety, which accounts for more than 90% of Vietnam's crop, were down to $1.93 per kilogram in May after being as high as $2.31 in October 2014, according to World Bank data.

And despite the bean hoarding, a Reuters poll of 17 traders and analysts forecasts the price of robusta coffee futures will be $1.82 per kilogram at the end of 2015, 5% below the level at the end of 2014, and the average price for 2016 is projected at $1.83 per kilogram.

There are two main types of coffee produced globally. The robusta beans that Vietnam produces are a more bitter-tasting variety of coffee. These are mainly used for instant and cheap brews. The more prized variety is arabica, used for espresso in coffee shops and restaurants around the world and farmed mainly in Brazil, Colombia, Ethiopia and Central America. 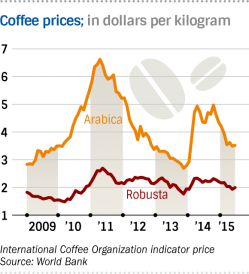 But the market premium for arabica over robusta has shrunk considerably, according to World Bank data. The price of arabica has dropped to $3.52 in June per kilogram from its peak of $6.62 in April 2011, largely due to the increasing popularity of cheaper instant coffee. That brings the premium back to levels seen before the price spread between the two varieties began to widen in 2009.

Vietnam's coffee industry was started in the mid-1850s by French colonists, but it was only after the war with the U.S. ended in 1975 that Vietnam emerged as a major player in the sector. With average crop growth between 20% and 30% during the 1990s, Vietnam is now the world's second-biggest producer and exporter after Brazil, according to Indexmundi.com.

Vietnam's rapid production growth has led to oversupply. But in the longer-term growers are betting their highland slopes on shifting regional tastes. Coffee consumption is booming in Asia, a region where tea has been the traditional drink of choice.

Since 1990, Asia has experienced the world's fastest growth in coffee consumption, growing by an average rate of 4% per year and increasing to 4.9% between 2000 and 2012, according to a February 2014 report from the International Coffee Organization. Between 1990 and 2012, Asia's share of global coffee consumption rose from 9.4% to 13.8%.

In Southeast Asia, the potential for growth is still very high. Currently, annual per capita coffee consumption is just 1.0-1.5kg, far less than the 3.4kg in Japan, a leading Asian coffee-drinking nation, according to the ICO report.

At present, the growth in consumption in the region is largely in instant coffee and the three-in-one coffee-whitener-sugar mixes, both of which use robusta beans. If this growth pattern continues, the bet by Vietnamese farmers will pay off. Meanwhile, global chains such as Starbucks and Gloria Jean's Coffees are spreading their outlets into many Asian cities. And homegrown premium coffee chains springing up, too, serving fine arabica coffee. Depending on how Asia's love affair with caffeine develops, demand for robusta coffee may or may not keep growing in parallel with the growth in the overall Asian coffee market.