TOKYO -- The coronavirus pandemic shows no sign of losing momentum as it hopscotches the globe, though many of its devastating effects and even its path might have been thwarted if the world had heeded warnings issued two years ago by Johns Hopkins University in "The Characteristics of Pandemic Pathogens."

The report calls attention to corona and other types of highly infectious viruses that infect the respiratory system. It makes eight key recommendations in warning that RNA viruses, whose ability to mutate makes them an especially wily enemy, are prone to explode into pandemics.

The report calls for prioritizing the development of anti-virus agents for respiratory-borne RNA viruses, the biggest threat. Vaccines against these viruses should also be a priority, it says.

The Johns Hopkins report also says countermeasures should not be based on a list of pathogens derived from historical records nor on political considerations. In addition, it suggests a surveillance regime for coronaviruses on par with that for influenza viruses. The report's writers envision clinical centers taking part, and the research being publicly and privately financed.

The recommendations are in line with measures that should be adopted as the global community fights to bring COVID-19 under control. Experts say that given the characteristics and behaviors of pathogens, the proposed prescriptions are sound. 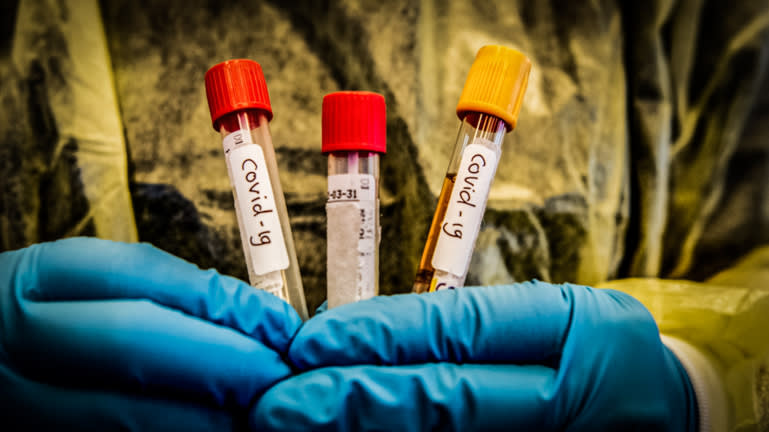 A lab technician holds test tubes containing samples from patients that have tested positive for the coronavirus at Amphia Hospital in the Netherlands.    © AP

The current pandemic should not have caught the world off guard. With so many people and goods freely moving across borders, once an infectious disease emerges, it almost immediately affects various corners of our shared planet.

The global community has been aware of the importance of international countermeasures. Global warming is allowing mosquito-borne and other infectious diseases to take root in mid-latitude regions, not just the tropics.

Furthermore, the world has come together to address and counter diseases like AIDS, tuberculosis and malaria through the World Health Organization and private funds. In recent years, a Japan-Britain and other alliances have been formed to fight superbacteria that have gained anti-microbial resistance due to excessive use of antibiotics.

But so far, international measures to fight off respiratory infections have almost exclusively focused on influenza.

The world is now in the grip of a deadly pandemic, with experts lauding the virus's "extremely smart survival strategy." It is stealthy, spreading from people who feel healthy and show no symptoms to other victims who experience great difficulty breathing and come down with life-threatening pneumonia. Medical workers in protective suits monitor a coronavirus patient being transferred in an ambulance from the intensive care unit at Gemelli Hospital to Columbus Covid Hospital, in Rome.   © Reuters

Coronaviruses belong to a family of viruses that can cause the common cold, but many academic circles have paid little attention to this type of pathogen as infectious disease research does not draw much attention compared with central nervous system and circulatory system studies.

"Funding is rarely available for studies on coronaviruses," said a long-term infectious disease researcher at a university in Japan.

In addition, the transient nature of infectious diseases gives pharmaceutical companies little incentive to develop drugs that can fight them off. Once SARS petered out, so too did efforts to put vaccines to practical use.

There is no market for infectious disease drugs once "an epidemic is over," said George Nakayama, chairman of Daiichi Sankyo and the current president of the Japan Pharmaceutical Manufacturers Association. The government should not leave countermeasures to the private sector alone. Instead, it should provide incentives such as guaranteeing the purchase of drugs once they are developed, Nakayama said.

The fatality rate for the new coronavirus is considered much lower than that of SARS. But that is no guarantee the fatality rate of the next virus will also be low. It could be even more cunning.

It is time for the global community to come together as one to better share valuable knowledge and data gained from the fight against COVID-19, for the sake of halting the spread of the next viral threat.