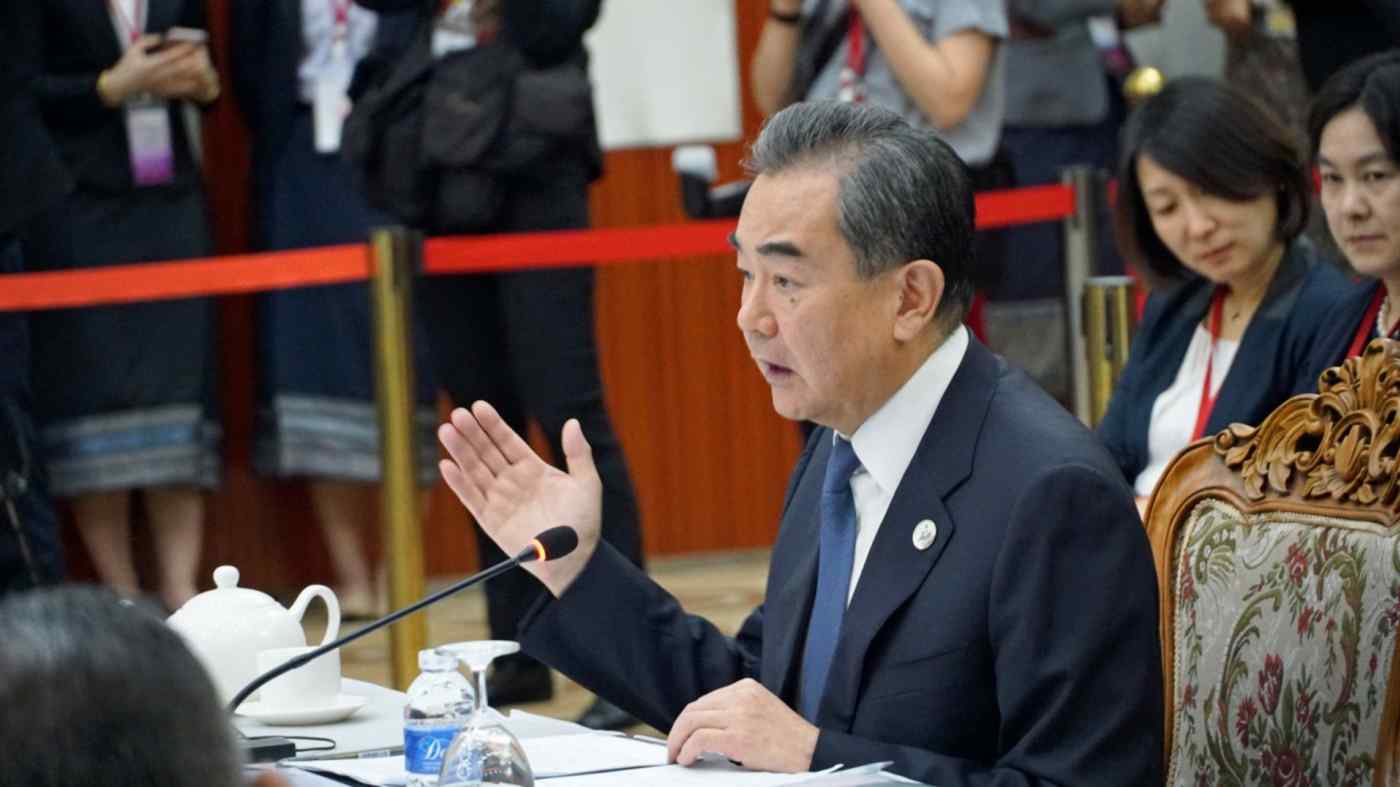 VIENTIANE/BEIJING -- As foreign ministers from the Association of Southeast Asian Nations and China gathered in Laos Thursday to discuss the coronavirus outbreak, Beijing used the opportunity to persuade countries to lift entry restrictions on Chinese travelers.

The ministers agreed to share information on treatment and epidemic control methods and promote joint vaccine development, according to a statement released after the meeting in Vientiane. They also pledged to "resume and enhance exchanges and cooperation" depending on the "progress of the prevention and control of the epidemic."

Chinese Foreign Minister Wang Yi, who co-chaired the meeting, touted progress in the fight against the outbreak under President Xi Jinping's leadership, noting a decline in newly detected Chinese cases.

The Chinese side leveraged this development as it leaned on ASEAN members to relax bans on Chinese nationals and other travel restrictions aimed at curbing the spread of the virus. Such measures have made it more difficult for Chinese Communist Party officials and business executives to travel, aggravating the outbreak's already substantial effect on China's economy.

The World Health Organization's recommendations should be respected, with efforts made to return trade and travel to normal as soon as possible, said Wang, who proposed holding top-level meetings.

The ASEAN bloc, China's second-largest trading partner, at least outwardly showed a willingness to cooperate with Beijing -- a necessity given member states' geographic and economic closeness to China. But the extent of enthusiasm for the idea vary widely.

Indonesia, which has barred entry by foreign nationals who have been to China within the preceding two weeks, acknowledged the need for closer cooperation. But whether it will agree to ease its restrictions anytime soon remains unclear.

Foreign Minister Retno Marsudi tweeted Thursday that she "underlined the importance of sharing information on evacuation of ASEAN nationals from points of the endemic in any part of the world" at the meeting.

Other countries on the strict end of the spectrum include Singapore, which has imposed an across-the-board ban on Chinese passport holders.

By contrast, some ASEAN members that place a higher priority on relations with Beijing have gone with looser restrictions, or none at all.

In a one-on-one meeting Wednesday with Wang, Thai Foreign Minister Don Pramudwinai expressed confidence that Thursday's event would contribute to public health in the region and beyond. Thailand has not restricted entry to Chinese travelers -- who numbered a record 11 million last year -- out of concern for its tourism industry.

Cambodia, which has aligned itself closely with China, has also opted against travel curbs. The country allowed passengers from the Westerdam cruise ship to disembark there after it had been refused by five other ports over coronavirus fears, and Prime Minister Hun Sen was the first foreign leader to visit Beijing since the outbreak.

The large amount of travel among ASEAN countries means that if the virus starts to spread in members with relatively lax entry restrictions, tougher bans may be rendered moot. The latter group may ask citizens of countries with looser rules to voluntarily refrain from visiting. The resulting decline in travel would risk crimping the bloc's overall economic growth.

As for China, its more active diplomatic overtures appear intended to quell unrest at home.

The government is expected to postpone the National People's Congress scheduled for next month -- a highly unusual move -- and its steps to contain the virus are meeting with growing public concern. Foreign praise for China's response would give Beijing something to use to reassure its people as well as reduce the country's sense of international isolation.