TOKYO -- The Japanese government is under fire for procrastinating on declaring a state of emergency and implementing stricter measures to limit people's movement as confirmed cases of the novel coronavirus continue to increase in the country.

Prime Minister Shinzo Abe's hesitation comes from the fact that the legal basis of such a declaration was put in writing just last month.

The revised legislation on measures against the coronavirus stipulates that two conditions must be met before such a declaration is made: the outbreak can greatly harm people's lives and health; and a rapid and nationwide outbreak is threatening to bring devastating damage to the people's lives and the economy.

Japan's foot-dragging is in stark contrast to other countries and cities that have taken drastic steps. In New York, all restaurants and cafes are closed except for take out. France fines people who defy the government's restrictions on going out.

Frustration toward the government escalated after Abe on Wednesday unveiled the government's latest stratagem to battle the steadily spreading coronavirus: two free cloth masks for each of the country's 50 million-plus households.

"Is this supposed to be an April Fool's joke?" tweeted Naoki Hyakuta, a conservative novelist who is usually on the same page as the prime minister. 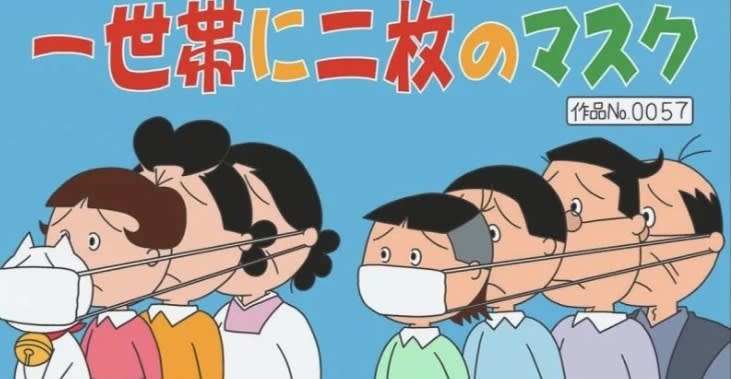 People took to Twitter to attack Abe's plan to distribute two masks to every household in Japan. (Photo taken from Twitter)

The plan was mocked on social media. By Thursday, "#Abenomask" -- or "Abe's masks," a play on Abenomics, the prime minister's signature economic policy -- became a trending topic on Twitter.

Abe is under tremendous pressure to act as the number of new cases ticks higher day by day, with more than 2,380 confirmed infections as of early Friday. Central and local governments have so far stuck with voluntary measures, including last weekend's stay-at-home requests for Tokyo and Osaka residents that went unheeded by many. While recent legislative changes let Abe declare a state of emergency and grant local authorities more power, he has declined to exercise that power.

"At this point, we have yet to see a rapid, nationwide outbreak, and we are still holding up," Abe told the lower house on Thursday. "To protect the people's lives and health, I will act without hesitation if necessary."

Economic Revitalization Minister Yasutoshi Nishimura told the Diet that the first condition for an emergency declaration has been met, given the rise in seriously ill patients. Opinion is divided over the second condition given that some rural areas have seen few cases compared with rapid increases in big cities.

Even if Abe declares a state of emergency, his ability to force people to stay home will be limited.

A declaration would give prefectural governors the ability to order people to avoid going out or holding events. But it does not provide for any punishment for those who refuse to do so, unlike measures taken by France and Italy.

Other powers granted by the legislation do have teeth. Prefectural governments could requisition land and buildings for medical facilities, and force producers, retailers and distributors to provide food and medical supplies, and could punish violators.

Still the Japan Medical Association on Wednesday urged the government to declare a state of emergency and warned that Japan's medical system is in a "state of crisis."

If health care workers become infected with the coronavirus, "we will be unable to provide appropriate medical care to the public," the group said in a statement.

The powerful Japan Business Federation lobby, better known as Keidanren, indicated this week it would accept a state of emergency as long as provisions are made to ensure that vital services such as utilities, food supplies and medical care are not too severely disrupted.