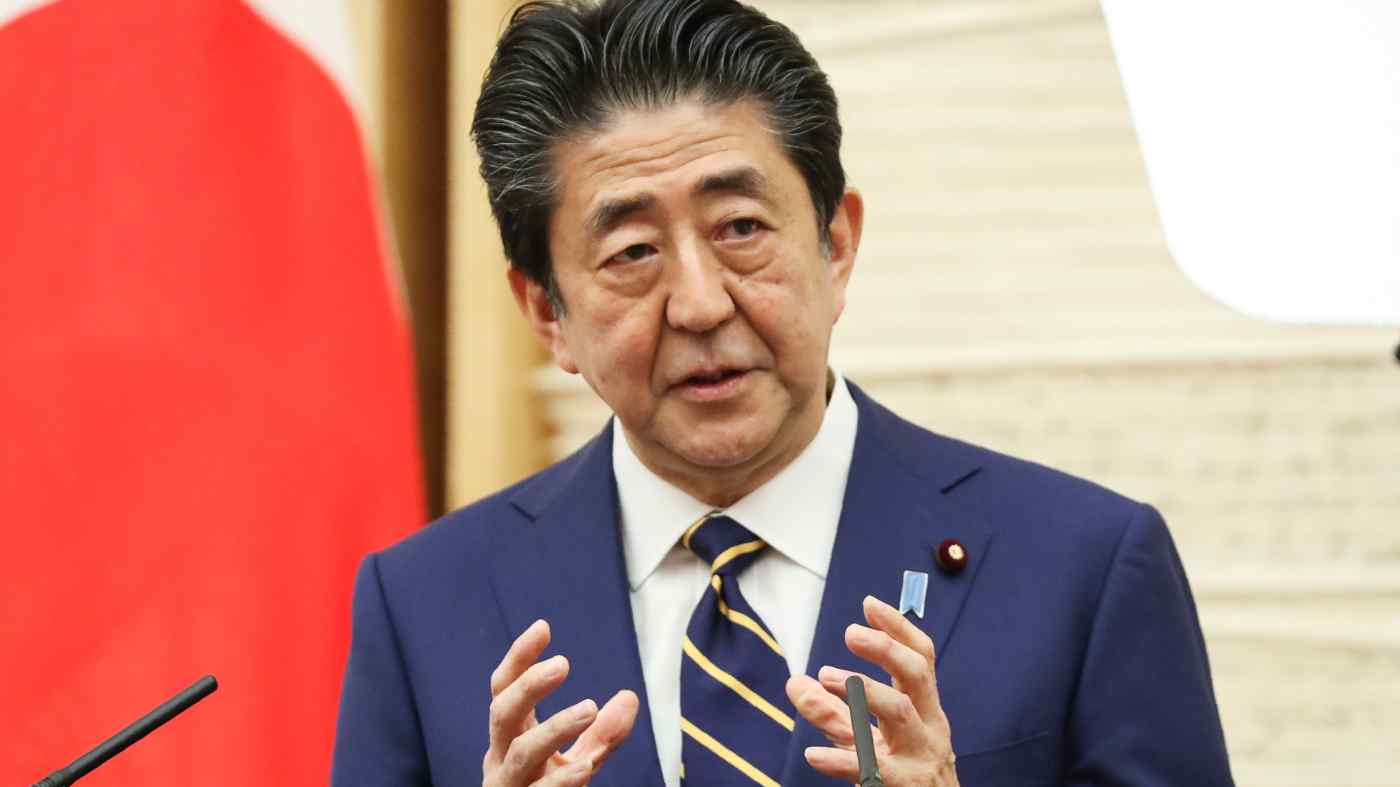 TOKYO -- Japanese Prime Minister Shinzo Abe on Tuesday declared a monthlong state of emergency, warning of the strain on hospitals and saying the coronavirus crisis poses the biggest threat to the economy since World War II.

The emergency declaration gives the governors of Tokyo and six other selected prefectures -- Kanagawa, Chiba, Saitama, Fukuoka, Hyogo and Osaka -- legal backing to ask the public to stay home.

"It is of the utmost importance to change the behavior of citizens," Abe said. "If we can reduce person-to-person contact by 70% or 80%, the increase in infections will peak out in two weeks and shift to a decline."

The declaration does not allow for a full lockdown, and does not include punishments for those who fail to comply. The governors will be allowed to order the closure of schools, cinemas, department stores and other places that draw large crowds. Essential services such as transportation, banks and supermarkets will be allowed to continue operating, as will stock exchanges.

Abe said there had been a "rapid increase in cases with unidentified infection paths, and medical services are also under pressure." The country's total number of coronavirus cases has surged past 4,000.

"If infections continue to spread at this pace, 10,000 people will have the virus two weeks from now and more than 80,000 people a month from now," the prime minister said.

Earlier in the day, the cabinet approved a 108 trillion yen (nearly $1 trillion) stimulus package that includes cash handouts -- 300,000 yen for households and up to 2 million yen for small and mid-size businesses hit by the decree.

Soon after Abe's emergency announcement, J.P. Morgan economists predicted Japan's economy will contract 17% in the second quarter, from the previous term -- a 10-percentage point downgrade from a previous projection. Even this is contingent upon the government lifting the emergency in a month, and economic activity gradually returning to normal in June.

Though the economists think the stimulus will be "effective" in supporting households and companies, they said it would not be enough to change the "big picture" behind their forecast of a 4.4% full-year contraction in 2020.

"It is not an overstatement to say that Japan's economy is facing the biggest crisis in the postwar period," Abe said later in a lengthy evening news conference. "We will definitely protect people's employment and lives."

Explaining the rationale for declaring an emergency now, he said that the government "reached a conclusion that there is no time left." The "physical and emotional stress on medical workers" is rising, he said, stressing that hospital bed capacity is "reaching the limit" despite efforts to house some patients in hotels and other locations.

Abe vowed to "do everything we can to protect the health care workers on the ground."

Shigeru Omi, a former World Health Organization official and the president of the Japan Community Health Care Organization, appeared at the news conference and explained why the emergency decree was applied to the seven specific locations. Omi said three factors were taken into account: the number of cases, the time it took for cases to double, and cases of unidentified origin.

Fukuoka posed a unique problem, Omi noted. Though the number of infections in the southwestern region remains low, they doubled in the shortest period of time, and the number of cases with unclear links was the highest in the country.

Abe, meanwhile, also touched on the Fujifilm-developed flu drug Avigan, which has shown effectiveness as a COVID-19 treatment in clinical trials. The prime minister said patients in Japan would be able to use the drug if they wish, as long as their hospital approves. He said some hospitals had already approved its use.

Although it has been a month since Abe's cabinet passed a bill amending the special measures law for infectious diseases to cover the novel coronavirus, the prime minister had until Tuesday declined to exercise his authority to declare an emergency.

"Given that individual rights would be suppressed [after an emergency declaration], I would thoroughly examine its potential impacts when making a decision," Abe said last month.

But pressure on the government to take stringent measures had been escalating as the number of infected people, especially in Tokyo, took a leap late last week. On Saturday, the capital reported more than 100 new confirmed cases for the first time.

For the past two weekends, Tokyo Gov. Yuriko Koike has asked residents to refrain from leaving their homes, a largely unenforceable request which coincided with the arrival of the cherry blossoms and warm spring temperatures that beckoned the city's inhabitants outdoors.

Abe has been criticized for the government's response in the early days of the outbreak. Only when talk began of the coronavirus delaying the Olympics did Abe make an abrupt request to close the nation's schools at the end of February. For the past month, the prime minister and the ruling Liberal Democratic Party hesitated to make an emergency declaration, citing the need to respect the individual rights granted by the constitution.

The government insists the state of emergency does not mean a full lockdown of the affected prefectures. Koike told the Nikkei Asian Review on Friday that declaring a lockdown would be "impossible" under the constitution.

"I am asking [for restraint] so we do not have to excessively exercise our authority," she said.