TOKYO -- Prime Minister Shinzo Abe is planning to overhaul rules that require signatures using traditional seals -- cited as a major obstacle in increasing teleworking and receiving financial aid -- as the government races to meet its target of reducing human contact by 80% to fight the coronavirus, Nikkei has learned.

Abe plans to instruct relevant cabinet ministers at a meeting of the Council on Economic and Fiscal Policy on Monday to review procedures that require signatures with a seal -- known as hanko or inkan -- as well as face-to-face interaction.

The prime minister is taking this opportunity to conduct a comprehensive review of Japan's notoriously byzantine regulations. He will convene the Council for Regulatory Reform to identify unnecessary practices and regulations, aiming to eventually abolish them by submitting reform bills to parliament.

Abe set the goal of cutting human interaction by 80% when he declared a state of emergency to rein in rising coronavirus infections this month. The measure allows local governments to take steps such as requesting certain businesses close.

More than two weeks have passed since it was initially declared for Tokyo and six other prefectures, though the target has yet to be achieved. Abe later made the entire country subject to the emergency. 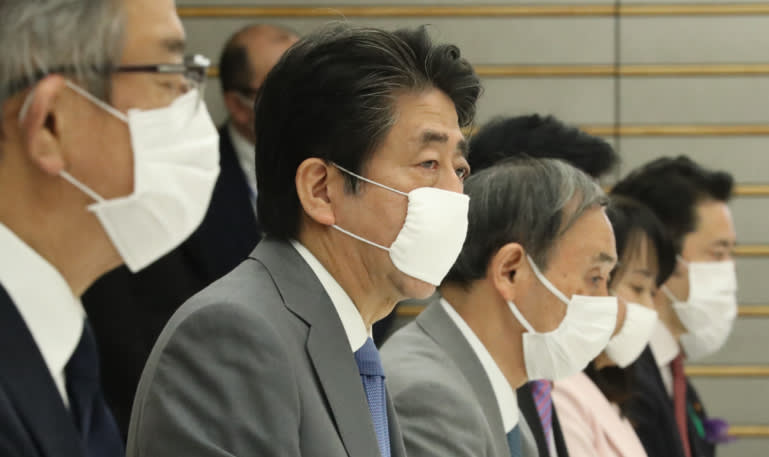 Prime Minister Shinzo Abe intends to ease requirements that legislative and business documents be signed in person with traditional seals as a way to reduce human contact.

The government believes one reason it has fallen short of the target is due to administrative procedures that require seals, face-to-face meetings and the submission of paper documents.

For example, some application documents that company officials submit to receive coronavirus subsidies for workers need a seal signature, which requires them to physically go to employment offices.

Employees also need to go to their companies to affix the signature by pressing the seal to prepare the documents, which are crucial for companies to be able to pay workers.

If multiple companies rush to these employment offices to apply for government aid, it risks creating the "3Cs" that the government has been calling to avoid: confined spaces, crowded places and close contact. The Golden Seal of the King of Na, Japan's oldest existing stamp, is thought to date back to 57 AD.

If company employees need to go to the office just for seal-stamping, that would directly work against the government goal of reducing contact by 80%.

The history of stamps goes back more than 5,000 years, when they were used in the Mesopotamia Civilization. They traveled across the world, including to Japan via China. The oldest existing stamp in Japan is the "Golden Seal of the King of Na," which is believed to have been given to a visiting Japanese envoy by the Chinese emperor in 57 AD. That golden stamp was found in Japan's Fukuoka Prefecture in 1784, and is preserved today in Fukuoka City Museum.

Stamps have continued to stay as a symbol of authority, carrying more weight than a handwritten signature.

Despite efforts to shift away from the outdated custom, only slightly more than 40% of Japanese corporations have digitized contracts even partially, according to a survey on information technology usage released in March by JIPDEC and ITR, a nonprofit and research firm, respectively.