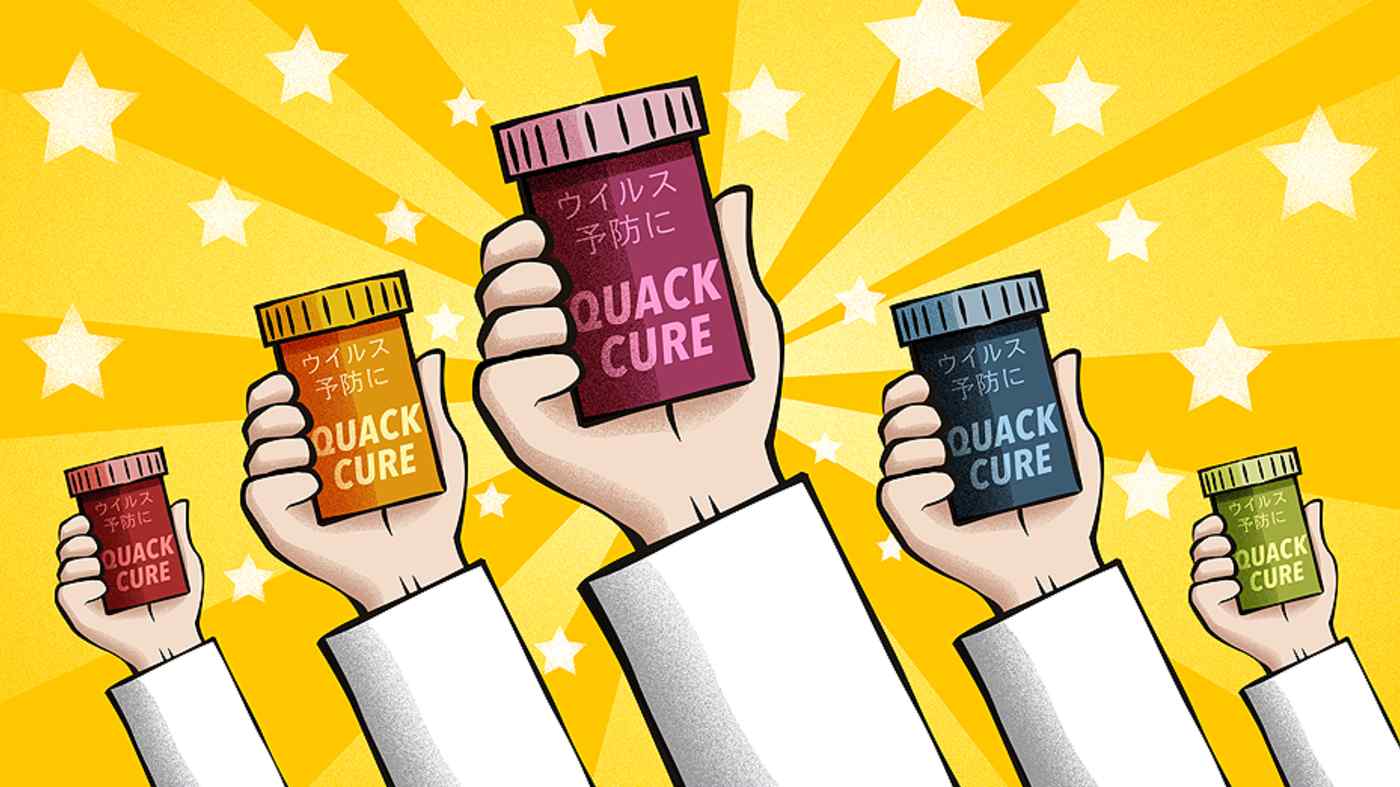 TOKYO -- Dubious cures for the novel coronavirus have popped up on e-commerce sites in Japan, prompting a government watchdog to warn consumers about unproven treatments and disinfectants. A survey conducted by Nikkei shows good cause for concern.

The Consumer Affairs Agency warned in March of widespread online advertisements for health food products and room disinfectants with unproven claims of effectiveness against the coronavirus.

Experts attribute the problem to lax oversight by regulators and e-commerce site operators. With many people staying at home to slow the epidemic, consumers are relying more heavily on e-commerce for daily essentials.

Advertisements that make false or exaggerated medical claims are illegal in Japan under a law prohibiting unjustified product premiums and misleading representations. In addition, ads for uncertified products claiming to prevent or treat medical conditions are a violation of the pharmaceutical and medical device law.

Drugstores in Japan were raided repeatedly in March for suspected violations of these laws. But quack cures are still widely sold on e-commerce sites.

The government's concerns are well founded. Nikkei conducted a survey of roughly 250 products sold on the Japanese sites of Amazon.com and Rakuten between April 7 and 13, and again on May 21-22, with the total number of products surveyed reaching around 500. The products were found by entering search terms such as "measures against new coronavirus."

Based on advice from lawyers and other experts, the survey focused on expressions in product descriptions that may be illegal, including "works against all viruses," "prevention" and "disinfection." In the April survey, 33 of 144 ads for products on Amazon, or 23%, and 15 of 96 ads on Rakuten, or 16%, were deemed illegal. In all, 20% were found to violate the law. In May, 15% of ads were deemed illegal.

Most of these dubious ads were for disinfectants to be worn around the neck or sprayers designed to sit on a table top. The products claimed to be effective in eliminating viruses. Manufacturers and sellers say the claims are backed by test results, but inquiries revealed that many of these tests were conducted under unusual conditions or using quantities of the product that exceed normal use.

One product, a card designed to be worn around the neck, claims to emit chlorine dioxide. It sells for about 500 yen ($4.63). Although the Consumer Affairs Agency ordered 17 manufacturers to revise ads making exaggerated claims about the product in 2014, many ads continued to claim it works in airy homes despite the fact that product tests were conducted in an enclosed space. The agency ordered five manufacturers of the product to pull the offending ads on May 15.

Similar ads can be found on the Yahoo Shopping site, which operates under the wing of Z Holdings.

The huge number of dubious online ads reflects a structural problem with e-commerce in Japan. In general, online ads are created by the seller and registered individually with site operators. Regulators and site operators cannot monitor ads closely due to their huge number, and a lack of screening systems and trained people.

The language of the law against misleading representations also makes it hard to hold site operators liable for illegitimate ads created by the seller. This poses another difficulty for a system that essentially relies on self-regulation.

But, says Takaaki Someya, a lawyer familiar with e-commerce, "Site operators, which act as intermediaries between sellers and buyers, can be held accountable under the pharmaceutical and medical device law."

The Nikkei survey found many cases in which ads that were likely to violate the law were overlooked. A typical example involved a hypochlorous acid water spray. Although the solution is said to deactivate viruses, the effect weakens over time.

But the product was offered for sale as a hand cleaner and a gargle, with ads using expressions like "disinfection of new virus." Amazon itself recommended the spray and even markets the product on its own.

Japan's health ministry points out that selling the product as an antiviral agent for use on the body, rather than as a deodorizer or cleanser, violates the pharmaceutical and medical device law. The same view was expressed by the Tokyo Metropolitan Government, which monitors legal compliance for commercial products sold in the capital and provides guidance where necessary.

Rakuten told Nikkei that it deals strictly with legal and regulatory breaches when confirmed. Amazon Japan said that it strives to ensure products and their descriptions comply with laws and regulations, and requires sellers to respect such rules.

Noting that even big e-commerce operators do not understand the law well, Takahiro Murakami, a lawyer who is also licensed as a pharmacist, said these companies should "take responsibility for legal compliance because they earn profit from ads."

In the U.S., regulators have imposed a ban on the sale of anti-viral products that are widely available in Japan. Amazon has pulled them from its U.S. site. In addition, the U.S. government requires anti-viral products to be registered and strictly regulates their description and distribution, both online and offline.

The U.S. approach to the problem shows Japan can do more to protect consumers by introducing strict rules against the sale of products that violate the law.