After US, when will Asia get COVID-19 vaccines? 5 things to know

Pfizer inoculations proceed in West while other countries to wait months 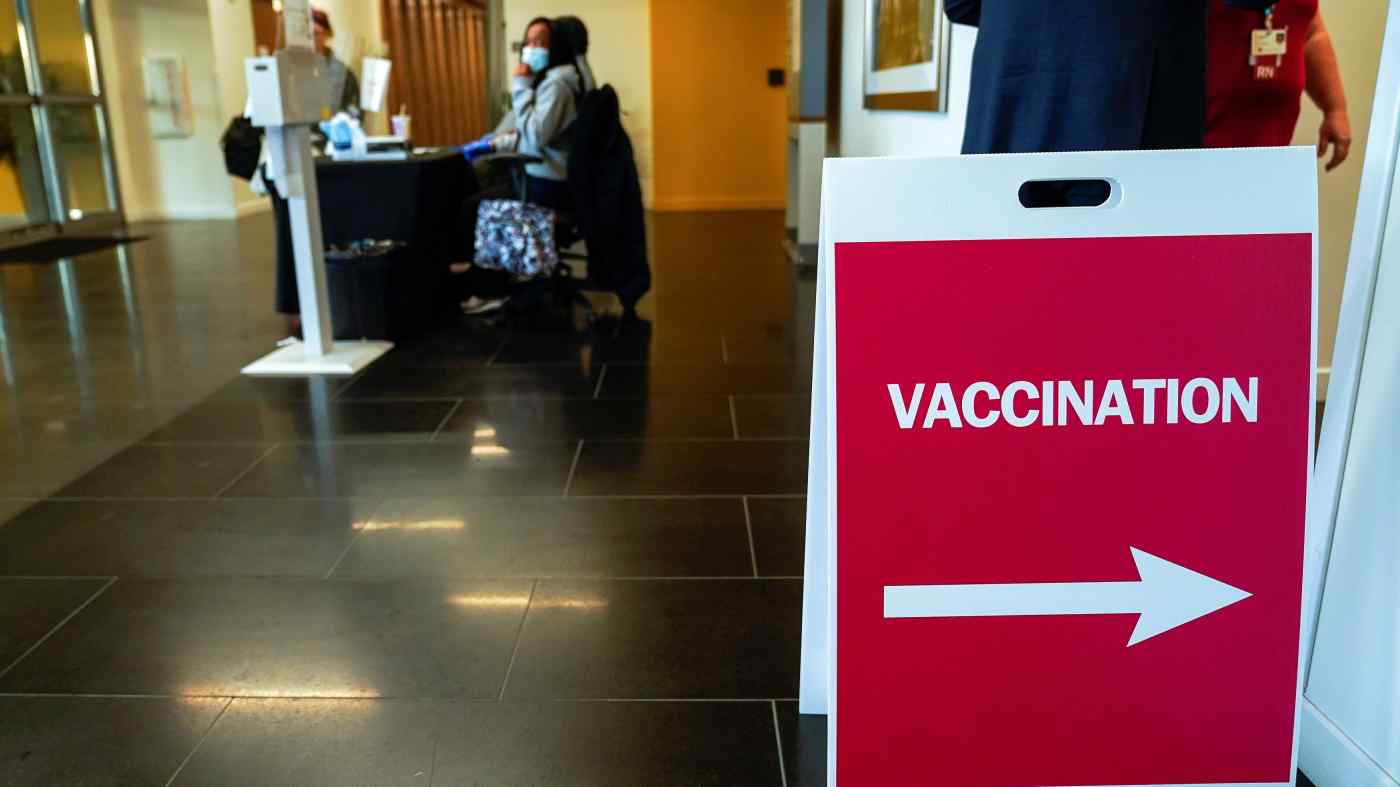 TOKYO -- Expectations are rising about the availability of COVID-19 vaccines, as the U.S. announced on Friday it had approved emergency use of one developed by Pfizer and German partner BioNTech.

The U.S. Food and Drug Administration's approval came as the country struggles to curb the highly infectious virus that has now infected more than 15 million people, the most in the world.

In the West, vaccinations are set to accelerate following a slew of approvals. On Tuesday, health workers in the U.K. kicked off inoculations by treating a 90-year-old grandmother with the Pfizer-BioNTech vaccine. This was followed on Wednesday as Canada authorized the same vaccine, with mass inoculations seen beginning next week.

The latest announcements mark a new chapter in the fight against a pandemic that has claimed 1.5 million lives and driven the global economy into the worst downturn in nearly a century.

Pfizer's vaccine is said to be more than 90% effective in preventing COVID-19. U.S. biotech company Moderna soon followed with its own candidate offering similar efficacy.

But the rollout has not gone without a hitch. Allergic reactions were reported in the U.K. on Wednesday, prompting the government to warn against giving the vaccine to people with a history of allergic reactions.

So, how soon will such vaccines be available in Asia? Experts warn that it will be months before the public can receive inoculations. Here are five things you need to know.

When will vaccines be approved?

Each country's approval process allowing domestic use of a vaccine will take time.

Pfizer has tested its vaccine on 44,000 people in six countries, but only 5% of them have Asian backgrounds. Japan's Pharmaceuticals and Medical Devices Agency argues that while the global results will be taken into account, separate tests need to be conducted on Japanese individuals to prove efficacy and safety. The Pfizer-BioNTech vaccine is said to be more than 90% effective in preventing the new coronavirus disease.   © Reuters

Pfizer began conducting a small-scale trial in Japan on Oct. 20. Its results, as well as those of the large-scale global test, are expected to lead the U.S. drugmaker to file for approval in Japan.

Examining such an application usually takes a year, but the PMDA says the process will be expedited in light of the emergency. Japan also wants to vaccinate its people before the country hosts the Summer Olympics starting July 23.

AstraZeneca also has been conducting a small clinical trial in Japan for its candidate since August.

In Singapore, the Health Ministry has formed an expert panel to assess the efficacy and suitability of vaccines for use with various segments of the city-state's population.

"There are many factors to consider, as not all vaccines would be suitable, safe and effective for all segments of our population," said Benjamin Ong, the panel's chair, who is senior adviser to the director of medical services for the Health Ministry.

"The expert committee will need to closely study the safety and clinical data as they become available, while taking into account our local context, so that we can assess and recommend an appropriate and holistic vaccination strategy that can be put in place for the Singapore population," Ong said. Who will supply the vaccines?

Many Asian countries have signed agreements with vaccine makers for supply. India has secured 600 million doses, mostly from AstraZeneca, according to data from Airfinity, a science information and analytics company. China, Japan, Indonesia, South Korea and Thailand all have deals for millions of doses from the European company. Malaysia recently signed a supply deal with Pfizer.

Taiwan has held direct discussions with a drugmaker on securing 10 million doses of vaccines and has made a down payment, Health Minister Chen Shih-chung said. The Taiwanese public is expected to receive inoculations as early as the second quarter of 2021.

The island also secured more than 4 million doses of vaccine candidates through COVAX, a global alliance for procurement and distribution of COVID-19 vaccines, the minister said. The group is co-led by Gavi the Vaccine Alliance, the World Health Organization and Coalition for Epidemic Preparedness Innovations or CEPI.

The nearly 15 million doses could supply roughly 7.5 million people in Taiwan, based on needing two doses per person, Chen said. Taiwanese officials do not intend to buy any vaccine candidates from China through COVAX.

Vaccine supplies for the remainder of 2020 are expected to be small as manufacturers boost production over the first half of next year, according to Airfinity.

That means initial batches from any drugmaker are likely to serve the company's domestic market and other leading markets such as the U.S. and U.K. The European Union is expected to come next, followed by the rest of the world, including Asia.

Vaccines are expected to become available in Japan between March and May. But the production bottleneck means that "it will be summer" before most Japanese people have access, predicted Satoshi Hori, professor of infectious disease control at Juntendo University in Tokyo. 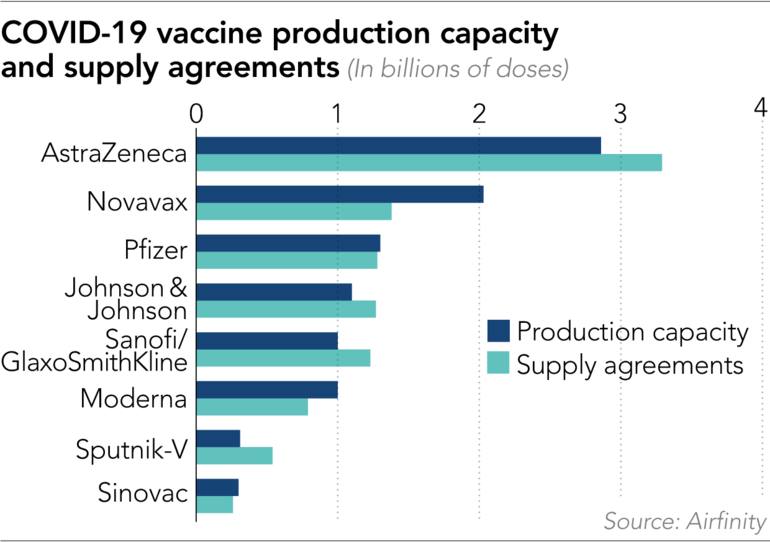 Far from it. The Pfizer vaccine needs to be kept at minus 70 degrees Celsius. Large hospitals have deep freezers for storage at such temperatures, but small hospitals and clinics do not.

AstraZeneca's candidate can be kept at 2 to 8 degrees, like normal influenza vaccines. Pfizer's vaccine might be reserved for medical workers in large hospitals, with AstraZeneca's product used at small hospitals and clinics for public vaccination, Hori said.

Most hospitals have enough syringes and needles, so their supply isn't seen as an issue, at least in Japan.

But medical workers are in short supply, Hori said. They already are overloaded with coronavirus patients following a surge in infections during the past month. Inoculations involve learning how to store and administer vaccines and checking their expiry date, which will add to the strain for such workers, he said.

Is the local supply chain ready?

Drug companies, wholesalers and logistics businesses are rushing to prepare for the vaccination program, but a smooth execution is by no means guaranteed.

Take the AstraZeneca candidate for Japan: It will be produced in Japan as well as overseas. The manufacturer, JCR Pharmaceuticals -- a drug developer -- said it has never produced vaccines.

Daiichi Sankyo is responsible for distribution, filling vials with the medication and packaging them. The Japanese company says it is working to prevent any shortage of vials and other supplies.

Pfizer, meanwhile, manufactures its vaccine in the U.S. and Belgium and ship it to Asia. Logistics will be a major challenge. A worker performs a quality check at a Sinovac Biotech packaging facility in Beijing. COVID-19 inoculation programs will involve learning how to store and administer vaccines and checking their expiry date.   © Reuters

PHC, a Tokyo-based medical equipment supplier, is busy handling orders for its ultralow-temperature freezer, which can cool to about minus 85 degrees Celsius. Orders are coming from U.S. and European pharmaceutical companies as well as international logistics companies, but PHC is increasing production to meet demand from Asia and other parts of the world.

China, which is expected to approve mass production of locally developed vaccine candidates by the end of December, has pledged to share them with neighboring countries in a diplomatic charm offensive. Cambodia is a potential beneficiary.

Cambodian Health Ministry spokeswoman Or Vandine said there were no plans at this stage to acquire vaccine stocks outside the COVAX facility.

Vandine said Cambodian health authorities will use the country's existing immunization programs to roll out a vaccine when it becomes available. Vaccine types requiring specialized storage unavailable in Cambodia could pose problems, she said.

Authorities have yet to finalize a national deployment and vaccination plan, she said, noting that a copy obtained by Nikkei was a draft and not endorsed. That plan lists in order six priority groups that comprise roughly 20% of Cambodia's 16 million people.

The first group includes "health care workers, including auxiliary workers," whose population is given as almost 37,000. "Essential government workers" are next, including the army and police. This category comprises almost 290,000 people.

The other three groups, in order, are 992,000 elderly citizens, 1.5 million high-risk adults with conditions such as hypertension and diabetes and about 620,000 garment factory workers.

Under the agreement, MyEG will be the sole distributor of the vaccine and will secure Halal status for the vaccine to enable usage for Muslims.

Property developer Yong Tai has also joined the race, teaming up with China's Shenzhen Kangtai Biological Products to conduct Phase 3 trials and sales of the latter's COVID-19 vaccine in Malaysia.