HONG KONG/TAIPEI -- Airfreight rates for shipping goods in and out of China have soared, with companies facing two or three times the cost before the coronavirus outbreak forced airlines to cut routes.

The price spike threatens to complicate efforts by companies to get their Asian supply chains moving again even as they deal with quarantines and other anti-virus measures that have slowed the restart of production at factories in China.

"All the previous contract prices and discounts have now been canceled... and things could be worse once everyone gradually returns to work and resumes production," said Hawk Chen, vice president of SC Global Logistics, which handles many electronics shipments for manufacturers.

The rate spike has shown up first with TAC Index readings for shipments into China, which currently involve numerous chartered flights carrying urgently needed supplies of masks and other health care items, but will be soon reflected in outbound freight gauges. 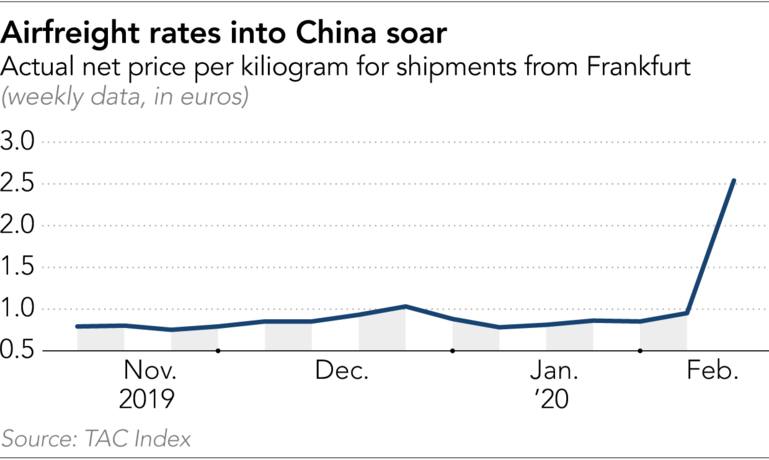 "Factories have been closed, therefore there has been no production, thus no pent up volume," said Peter Stallion, who works with companies on managing their cargo cost risks at Freight Investor Services in London. "However, capacity remains low and volume is resuming -- in most cases at ballooning levels to recover from the drop in... inventory."

Scheduled international cargo flights in and out of China have been cut by 80%, according to Lilian Chiu, Hong Kong director at international freight forwarder Hankyu Hanshin Express.

Domestic and international passenger flights, which usually carry cargo alongside fliers' luggage, have been slashed just as dramatically, with numerous foreign airlines stopping service completely. Only one daily flight now operates between Wuxi, an eastern city where South Korean chipmaker SK Hynix and others have major factories, and the key electronics hub of Shenzhen, down from more than 20 flights before.

At the same time, local controls on road traffic and quarantine requirements for drivers in China have made shipping by road extremely cumbersome as well, leading to more demand for air shipping.

"All cargo space is gone as soon as it is available even though prices have doubled," Chiu said. Comparing the excess demand to that for key consumer goods in amid the Corvid-19 virus panic, she said, "It's just like putting up toilet paper for sale in supermarkets in Hong Kong."

To fill the supply gap, desperate shippers have chartered cargo planes. At the moment, a Boeing 747 freighter charter from Europe costs at least $250,000, according to TAC Managing Director John Peyton Burnett.

Some airlines are adding special services in place of their canceled scheduled flights. All Nippon Airways, for example, will put on special flights between Shanghai and Tokyo's Narita International Airport on Feb. 23 and 24, after earlier cutting its Japan-China cargo capacity by 70%.

With so many ad hoc flights, airlines are only releasing flight schedules a week at a time, complicating planning for logistics services like Hankyu Hanshin.

For Asian airlines coping with the a huge plunge in passenger traffic due to the virus, higher rates are a blessing. The International Air Transport Association, the global airline industry group, recently said 2019 was the "worst year for airfreight demand since 2009" due to slowing global trade and economic growth momentum.

Asian airfreight volumes slid 5.7%, the most of any region. Cathay Pacific Airways, the region's top carrier of cargo, saw its volumes slip another 8.9% in January from a year before. The International Civil Aviation Organization estimates the outbreak could cost airlines $5 billion in revenue during the quarter to March 31.

Shippers looking to sea freight as a cheaper but slower alternative are confronting high prices too. The Shanghai Shipping Exchange's China Containerized Freight Index was at 936.65 last week, down only slightly from the 57-month high of 965.31 reached Jan. 23.

Airfreight market watchers say high rates will persist until airlines begin restoring their regular passenger services. Said Luya You, a transportation analyst at Bocom International, "There will be a bottleneck until passenger services are fully recovered."