As N95 masks run out, Japan turns to handful of domestic suppliers

Expansion hindered by lack of technology and post-pandemic oversupply fears A global race is on to secure personal protective equipment like masks and face shields, leading to a shortage in many countries.    © Reuters
JUNICHI SUGIHARA, Nikkei staff writerApril 15, 2020 04:08 JST | Japan
CopyCopied

TOKYO -- Japan needs 13 million N95 masks in the coming months to fight the coronavirus pandemic. It can secure only 700,000 this month.

The N95, which can block extremely small viral particles, is normally a disposable mask. But with the shortage so severe, the health ministry has begun calling for hospitals to reuse them as an emergency measure.

Amid a global run on the coveted masks, countries such as China -- where most of those masks are produced -- are focusing on meeting their own needs, limiting the amount that can be exported.

The search is on, therefore, for domestic Japanese suppliers that do not produce in China.

Tokyo-based mask maker Koken is one such company, and this is the reason its stock price has surged the past month.

Its factories in Japan's Kanagawa Prefecture and Thailand's Chonburi Province have shifted to three- and two-shift teams, respectively, to handle the increased production. During the January-March quarter, Koken boosted production of disposable masks by 80%, supplying them primarily to hospitals.

But Koken is a small company that employs less than 300 people and rang up just 8.6 billion yen ($80 million) in revenue last year. It lacks the wherewithal to undertake a massive expansion in capacity.

Before COVID-19, the company was already considering ways to reduce its dependence on face masks, as the shrinking population of Japan signaled weak demand ahead. It was toying with new products such as ventilation devices for factory clean rooms.

It is upon these small companies that Japan now relies upon to secure the needed surgical masks and hazmat suits. The health ministry projects major shortfalls of personal protective equipment, including 270 million surgical masks and 9 million face shields.

But the market is relatively small in normal times and is expected to shrink again after the current crisis passes. Without a government pledge to buy excess inventory, companies remain reluctant to ramp up production.

Japan normally imports about 30% of its N95 masks. But "China is prioritizing domestic supply, so imports [into Japan] have been held up," said a representative from Japanese mask manufacturer Yamamoto Kogaku.

This shift in priorities is also fueling worry about potential shortages of nonwoven fabric for mask production. Japan relies on imports for about 40% of its supply, with China accounting for about half.

Protective clothing poses a similar problem. The health ministry estimates that the country will need an additional 1.8 million sets, but domestic sources can produce only around 160,000 a month. DuPont and Toray Industries, which together control around 60% to 70% of the domestic market, are rushing to boost output outside Japan but have been unable to keep up with demand. 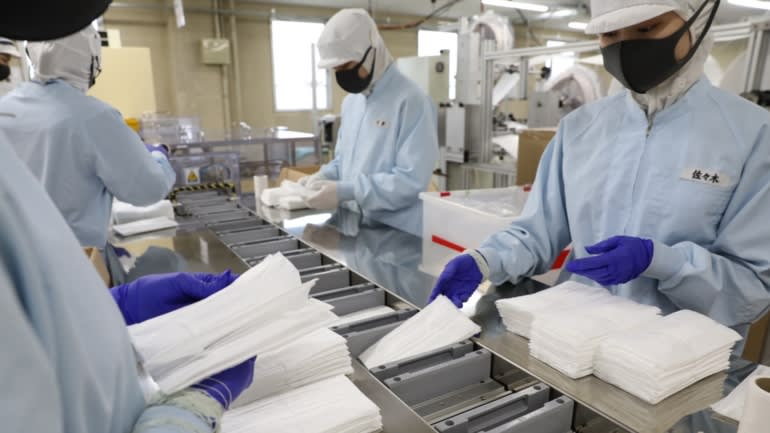 Companies are reluctant to ramp up production of personal protective equipment for fear that they will be stuck with excess capacity once the outbreak is over.

Most protective clothing is made in China and Southeast Asia, where production costs are so low that Japanese-made products cannot compete. The manufacturing process also requires specialized technology to bond materials together.

"We're not considering making it," a Japanese apparel maker said.

The situation is similar for latex gloves. Malaysia produces 70% of the world's supply, but exports have slowed and Japanese players find it difficult to enter the market.

Moraine, a Japanese importer and seller of products including personal protective equipment, has been flooded with orders from hospitals, with some even saying they would settle for refurbished items.

"We had been limited to one mask per person per day, but we're finally up to two," said a representative from a hospital in Kanagawa Prefecture near Tokyo.

Unlike with ventilators, where red tape has blocked new players from entering the market, Japan does not require government approval for producing personal protective equipment.

But hospitals base their purchasing decisions on whether products meet domestic and international standards. N95 masks, for example, must block at least 95% of particles that are 0.3 micron or more in diameter -- a standard that requires advanced manufacturing technology to meet -- and official certification can take up to a year.

And certification may not be worth the time and effort beyond the current crisis. N95 masks usually are used only in a limited set of circumstances, such as intubation.

In light of the hurdles, "it's difficult for us to make the decision to spend capital on" making N95 masks, said a representative of consumer products company Iris Ohyama.

Companies are also leery of being saddled with excess capacity once demand has passed its peak.

"Domestic manufacturers are worried about inventory risk," said the Federation of Japan Sewing Industry Association, an apparel industry group, adding that committing to major production increases "will be tough without a pledge from the government that it will take on excess inventory."

The U.S. and Europe, where the coronavirus has already wreaked havoc, are using government authority to address dire shortages of protective gear. U.S. President Donald Trump has invoked a Korean War-era law to direct manufacturers to make necessary medical equipment and has ordered restrictions on exports.

The European Union has exempted protective equipment from import tariffs while also restricting exports. It is also allowing the sale of equipment that meets World Health Organization recommendations, rather than requiring approval under EU standards.

Additional reporting by Hiroki Obayashi and Yusuke Takeuchi in Tokyo.