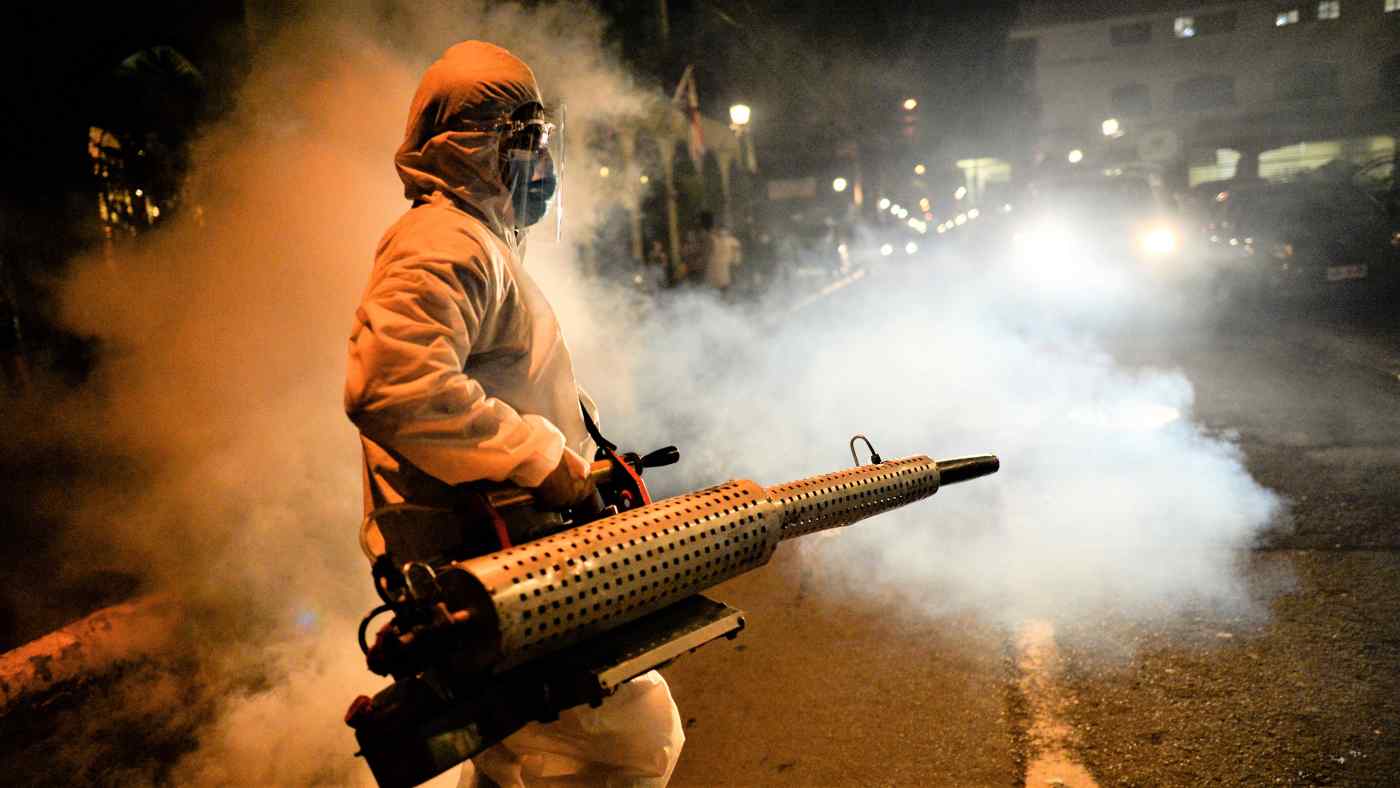 New Asiawide infections reached 146,664 on Wednesday, the first fresh high since late November, according to the statistics website Our World in Data. The site's definition of Asia stretches from Japan to India to Turkey, while excluding Australia and New Zealand.

Besides the initial outbreak in China in early 2020, there were two major peaks in Asia last year. These came in September and November, when some of the region's populous countries saw infections spike. Lockdowns and other safety measures suppressed the virus in the following months, but the numbers have been rising again since mid-February as new variants spread, restrictions ease and vaccinations proceed relatively slowly.

One country experiencing a surge is the Philippines, which reported its own record high of 8,773 new cases on Thursday.

Health Secretary Francisco Duque, in a televised meeting with President Rodrigo Duterte on Monday, suggested one possible reason was the spread of variants first found in the U.K. and South Africa, which are believed to be more contagious.

"However, Mr. President, it's not certain that this is the only reason for the rise in new cases," Duque said. 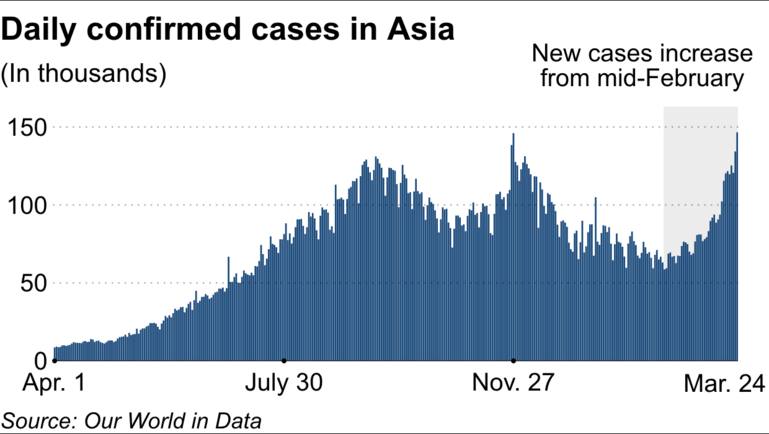 "The increased mobility led to the increased transmission," Duque told Duterte. "That's why you are seeing exponential [growth]." Meanwhile, as of Wednesday the Philippines had managed to inoculate only 0.46 per 100 people in its population of 108 million.

India -- the world's third hardest-hit nation after the U.S. and Brazil -- is also suffering a resurgence after a steady decline for months. It reported 53,476 cases on Thursday, a five-month high.

Experts say many people let down their guard once daily cases dropped below 20,000 earlier this year, versus around 100,000 in mid-September. The start of vaccinations on Jan. 16 may have also contributed to complacency, with mask-wearing becoming less prevalent and social distancing measures increasingly ignored. India has also detected variants, though their role in the surge remains unclear.

"Big cities such as Mumbai and Delhi are seeing a rapid rise in infections again," said Rajinder K. Dhamija, head of the neurology department at New Delhi's Lady Hardinge Medical College. "This is mainly a disease of urban areas where we see more international travelers and high population density." A report by the State Bank of India, the country's largest commercial lender run by the government, on Thursday suggested this wave might peak in the second half of April. "The entire duration of [the] wave might last up to 100 days, counted from Feb. 15."

For now, the troubling numbers appear to have increased the urgency to get more shots in arms. India had sought to position itself as a major coronavirus vaccine exporter. But last week, External Affairs Minister S Jaishankar assured parliament: "The supply of vaccines abroad is based on the assessment of adequate availability at home. This is continuously monitored and takes into account the requirements of our domestic vaccination program as it unfolds in different phases. An empowered committee oversees this entire process."

On Thursday, The New York Times reported that India appeared to be holding back on exports, citing government data, though the government itself has not clarified its current stance. Over in Japan, where the sluggish vaccine rollout is a source of frustration, a modest pickup in cases toward 2,000 a day is raising concern just four months before the Tokyo Olympics.

The Japanese government this month lifted a state of emergency imposed in some big cities, though restaurants are still advised to shorten their hours. Increased mobility coupled with the start of the new school and business years in April could contribute to a new wave, along with the confirmed spread of variants.

Asia is not alone in fighting the latest phase of the pandemic, well over a year into the crisis.

The World Health Organization warned earlier this week that several regions including Europe are heading in the wrong direction. Global daily cases topped 500,000 this week on a seven-day average basis, compared with about 350,000 in mid-February.

"There's pressure to open up in many of these countries," Maria Van Kerkhove, the WHO's COVID-19 technical lead, told reporters. She suggested it was growing more difficult to ensure individuals and communities "comply with proven control measures." 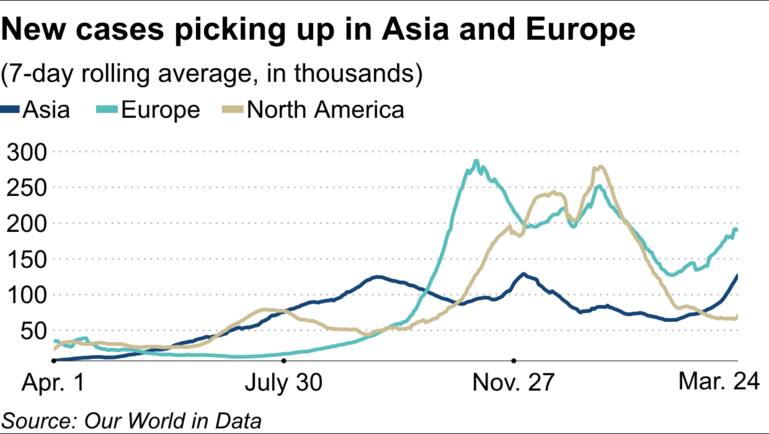 She also noted that vaccine distribution is "uneven and inequitable" -- Western countries are proceeding faster than Asia in general -- and that variants identified in the U.K., South Africa and Brazil are "associated with increased transmission."

The infection trends are weighing on economies that were starting to rebound.

"Slow vaccination progress in Asia-Pacific could limit the extent to which authorities can lift restrictions this year, putting a drag on the pace of recovery," wrote economists at Oxford Economics in a report issued Thursday, highlighting the increase in the Philippines in particular.

The stakes are high, with countries eager to restart cross-border travel and Asia due to host major international events, including the Olympics as well as the World Economic Forum's special "Davos" meeting in Singapore in August.

To be sure, Asian countries are not struggling across the board. China, Singapore and Vietnam have been keeping their daily numbers low: Singapore, for example, has been logging around 10 to 20 for weeks, mostly imported.

The city-state is conducting one of the region's fastest vaccine programs, with nearly 19 doses administered per 100 people, versus about 0.6 for Japan. Singapore plans to further relax its restrictions in April in tandem with the immunizations, allowing bigger events and more workers in offices.

But until populations reach much higher levels of immunity, the WHO's Kerkhove stressed the importance of vigilance. "There's still far more that we can do at an individual level, community-level measures, as leaders in government to support people to carry out measures that keep each of us safe."

Additional reporting by Kiran Sharma in New Delhi and Cliff Venzon in Manila.