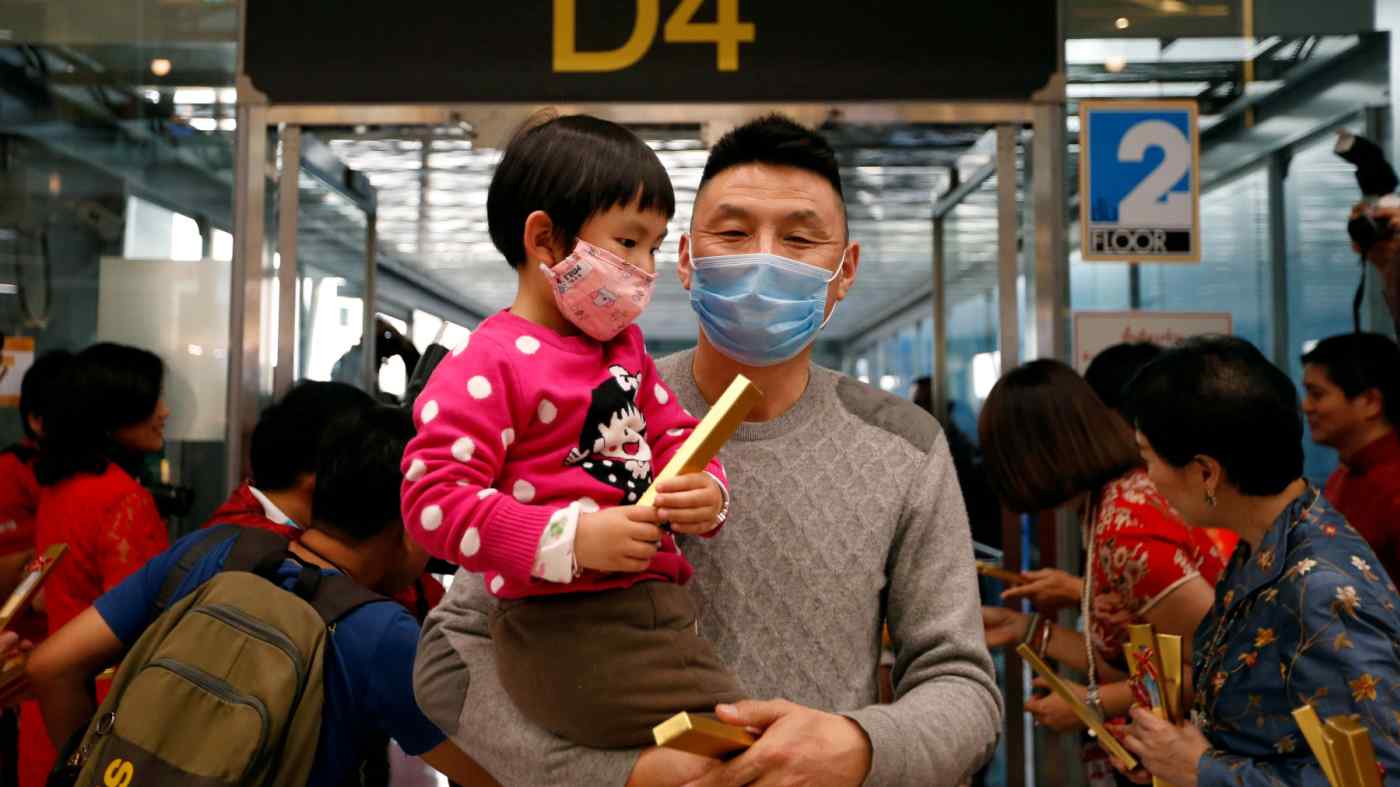 TOKYO/KUALA LUMPUR -- When Japan's Prince Hotels ordered its front desks to put up warnings for guests on Wednesday, it joined a host of Asian companies bracing for the impact of a new coronavirus from the Chinese city of Wuhan that is breaking out amid one of China's busiest travel seasons -- with some fearing it could even affect Tokyo's Summer Olympics.

More than 7 million overseas trips will be made during China's Lunar New Year holidays from Jan. 24 through Jan. 30, compared with 6.3 million last year, according to the China Outbound Tourism Research Institute. The top destinations are Thailand, Japan and South Korea, followed by Vietnam, Singapore and Malaysia. And this seasonal exodus has fueled fears among Asian businesses that infections could spread rapidly.

In Taiwan -- a two-hour flight from Wuhan -- top electronics contract manufacturer Foxconn on Wednesday explained its new quarantine policy, given its extensive production network in China. Employees in Wuhan who return to Taiwan for the holidays have been asked to stay home, although no health problems have been found so far.

Company founder Terry Gou said he is also considering banning employees from returning to China after the break, suggesting they could monitor production via video conferencing instead.

Meanwhile, in Thailand, which is expecting millions of Chinese visitors, authorities have tightened arrivals screening at airports with thermoscanners. Anyone found with a temperature above 38 C will be quickly sent to a hospital, said Aittirit Kinglek, a senior official at Thailand's Tourism Authority said.

Despite the broad containment effort, U.S. and European stocks followed Asian markets lower on Tuesday, after reports that the virus spreads between humans and confirmation of the first U.S. case. Passengers walk by a banner about Wuhan pneumonia at a thermal screening point in Kuala Lumpur International Airport on Jan. 21.   © Reuters

In Asian trading on Wednesday, stocks were mixed. Japan Airlines' share price continued to slip, after falling as much as 3% on Tuesday, while Hong Kong carrier Cathay Pacific Airways lost more ground after dropping almost 4%. Singapore Airlines was treading water.

In Japan's retail sector, which is reliant on inbound Chinese consumers, department store Isetan Mitsukoshi Holdings was down by 4% at one point on Tuesday and continued to wilt on Wednesday.

Chinese health authorities on Wednesday raised the number of known infections to 440. Nine deaths have so far been linked to the virus, which can cause pneumonia.

"Information about newly reported infections suggests there may now be sustained human-to-human transmission," the World Health Organization said on Tuesday, raising fears of an outbreak similar in scale to that of SARS in 2003. Severe acute respiratory syndrome killed almost 800 people.

Infected patients have also been identified in Thailand, Japan, the Philippines, South Korea and Taiwan. The WHO has not recommended travel restrictions but such measures could be discussed at an emergency meeting on Wednesday, where experts will determine whether the virus should be declared a global health emergency.

Asian companies said they are preparing to cope with the risks posed by the expected influx of travelers from China, drawing on lessons learned in the past.

IHH Healthcare, which runs private hospitals in Singapore, Malaysia, India and Turkey, said it is ready to tackle the Wuhan virus outbreak based on its experience with SARS and a similar coronavirus, Middle East respiratory syndrome, in 2012. IHH said it has assembled a response team everywhere it operates.

"We are capable of handling it, but we cannot underestimate any such outbreaks," IHH managing director Kelvin Loh told the Nikkei Asian Review.

Singapore Airlines said it "is monitoring the situation closely," while its budget subsidiary Scoot said passengers on all flights from China are being advised to report symptoms such as fever and shortness of breath to customs officials.

Japan's Prince Hotels, besides putting up the warning signs, is "gathering the latest information from the related institutions, and sharing it among employees," a spokesperson said.

A representative for Japanese department store operator Takashimaya said, "We have already been taking measures against infectious diseases."

The adroit response is in part due to the SARS outbreak, which is still fresh in the minds of many. In 2003, it killed 33 people in Singapore and caused an estimated 0.47% decrease in the country's gross domestic product, according to the Brookings Institution, a U.S. think tank. GDP declined by 0.15% in Malaysia and Thailand, and by 0.07% in Japan.

"Good progress is being made in containing the virus," a WHO spokesperson in Manila told Nikkei. "The pathogen was quickly identified and the virus sequence shared, enabling other countries to quickly diagnose potential new cases."

The difference in China's response is also notable when compared to the SARS outbreak, when news of infection was suppressed at first.

"I have no doubt that the time scale of recognizing, characterizing, releasing and reporting information is a fast improvement from the time of SARS," said Gabriel Leung, dean of medicine at the University of Hong Kong.

"What took months during the time of SARS is now compressed to a matter of weeks and days," he said. "The speed at which things have been coming out from the Wuhan health authorities for example is very quick. Are they as quick as possible? I don't know. But it is already a very huge step forward."

Nonetheless, the new virus -- which appears to be less virulent than SARS -- has already spread further afield than SARS did over a comparable time span. That means its economic effects could be more widespread, too.

For now, Thailand's crucial tourist sector is still seeing occupancy rates at major tourist destinations such as Chiangmai, Phuket and Ayutthaya and Bangkok hovering between 80% and 90%, as many Chinese travelers booked in advance, according to the Tourism Authority's Kinglek.

But a bigger, if more distant, worry is about the longevity of the potential epidemic. This is a major question for Japan, which is due to welcome tens of thousands of travelers from Asia for the Tokyo Olympics.

"A key concern is the potential risk for the Tokyo Summer Olympics in July-August 2020," said Rajiv Biswas, Asia-Pacific chief economist at IHS Markit.

"Containing the current Wuhan virus outbreak has therefore become a key priority for Chinese and international health care authorities," Biswas said, "with enhanced screening of travelers now being put into place in many major airports worldwide."