Asia's pension systems forced to cut back under COVID pressures A man and his grandchild in Tokyo: Japan received a "D" grade for pension adequacy in a recent report, putting it in a low tier alongside China, India, the Philippines and Thailand.   © Reuters
DYLAN LOH, Nikkei staff writerOctober 28, 2020 13:59 JST | Southeast Asia
CopyCopied

SINGAPORE -- The coronavirus pandemic is weighing on Asia's pension systems, raising concerns about whether some will be up to the task of allowing future retirees to live comfortably.

Across the region, employers hit by lockdowns and slower economic activity are struggling to keep pension funds topped up. Governments have responded by scaling back contribution requirements.

"The economic recession caused by the global health crisis has led to reduced pension contributions, lower investment returns and higher government debt in most countries," said David Knox, senior partner at Mercer, a U.S. human resources consultancy. "Inevitably, this will impact future pensions, meaning some people will have to work longer while others will have to settle for a lower standard of living in retirement."

In Malaysia, employee contributions to the federal Employees' Provident Fund have been cut to 7% from 11% of salaries, creating an expected shortfall of about $9.4 billion, according to Mercer's research.

In Thailand, social security contributions have been temporarily reduced to 2% from 5% for both employees and employers from September through November, while in Singapore a planned increase in Central Provident Fund contribution rates for older workers was deferred by a year to January 2022.

The city-state's government granted the delay to help employers manage costs. In Singapore, companies and workers are required to dedicate a portion of pretax salaries to retirement funds.

The index classifies systems on a scale of A to E. Those receiving a grade of A deliver good benefits, are sustainable and have a high level of integrity. An E grade means a system is nascent or nonexistent.

Only the Netherlands and Denmark received A ratings. Singapore's system was rated B -- the best in Asia and the only nation in the region to rank alongside countries such as Sweden, Norway, New Zealand, Canada and Switzerland.

Malaysia and Hong Kong were rated C+, while Indonesia and South Korea were rated C. Japan, China, India, the Philippines and Thailand all received Ds. Overall, Asia's pensions scored an average of 52 points, worse than the global average of 59.7 out of a possible 100. 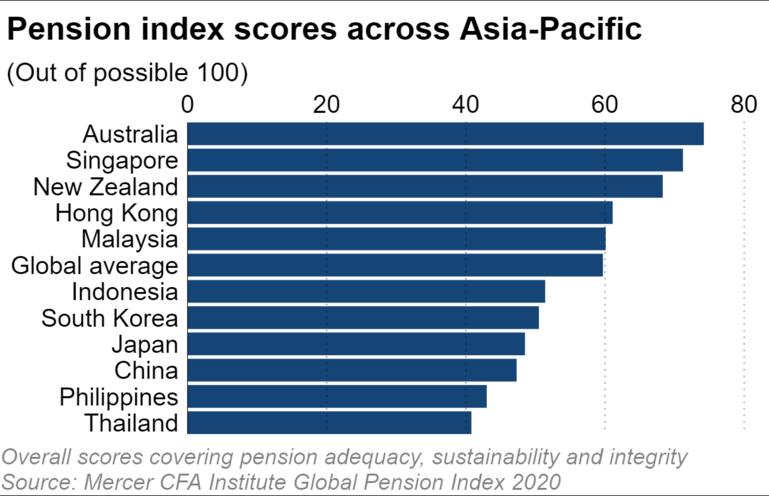 "Western systems often have broader coverage of social benefits, and they are generally more mature, typically with a long head start on most Asian markets," she added.

The study noted that although the scores do not yet fully recognize the longer-term effects of the COVID-19 pandemic on future pension payments, "reduced economic growth has already led to lower scores" in terms of sustainability. Scores in that category fell an average of 1.2 points this year.

The crisis has only heightened financial pressures for retirees and the strain on public resources.

"Even before COVID-19, many public and private pension systems around the world were under increasing pressure to maintain benefits," said Margaret Franklin, president of the CFA Institute. Thai seniors participate in an aquatic exercise class in Bangkok in 2016. Even before the pandemic, many public and private pension programs were under pressure to maintain benefits.   © Reuters

The report also stressed that swelling public debt in the wake of the outbreak is likely to restrict the ability of future governments to support the elderly, either through pensions or the provision of other services such as health or nursing care.

To deal with these challenges, Mercer said employers need to create flexible work and retirement models so that people can work, earn and save into later life in order to plug gaps in their retirement savings.

It added that governments should raise awareness of the financial implications of the pandemic for retirement savings, and ensure that the employment and pension regulatory frameworks that help people stash funds for their senior years stay the course.

"Some governments have allowed temporary access to saved pensions, or reduced the level of compulsory contribution rates to improve liquidity positions of households," observed Deep Kapur, a professor and director of the Monash Centre for Financial Studies in Melbourne.

"These developments will likely have a material impact on the adequacy, sustainability and integrity of pension systems," Kapur said.