Asia's winners and losers from mayhem in the markets TOKYO -- Businesses across Asia already reeling from the spread of the new coronavirus now have new problems to contend with. This week's dive in oil prices, and the market upheaval triggered around it, risks changing the landscape in which many companies operate.

The region's oil companies are most directly exposed to the crude price war started by Saudi Arabia, which now represents the fiercest of operating headwinds. "The price collapse could be the trigger for a new phase of deep industry restructuring," said Wood Mackenzie, the energy consultancy.

But the ripples from the market turmoil are spreading across other sectors -- half a world away, shares in Tesla fell 13% as investors speculated that cheap oil would dent demand for expensive electric vehicles.

Sentiment across sectors has turned sharply more negative, with the oil price fall seemingly reinforcing a view that Asia faces a big downturn. "Investors are more vividly aware of risks that the fall in demand due to the COVID-19 outbreak may have kicked off a negative chain reaction, which could eventually lead to a global economic slowdown," said Yoshimasa Maruyama, chief market economist from SMBC Nikko Securities in Tokyo.

Here the Nikkei Asian Review highlights some of the sectors to watch as markets gyrate and confidence in the business climate takes another hit.

As Wood Mackenzie noted, the last price war to shake the sector played out as recently as 2015-16, when OPEC again kept production high. But at that time the demand side of the market was healthier. This time, demand has been severely inhibited by the measures taken around the world to control the coronavirus outbreak, with many countries implementing travel restrictions.

Russia's refusal to agree to more production cuts -- the trigger for the price war unleashed by Saudi Arabia -- was widely seen as a way to squeeze U.S. shale producers. But for some Asian companies it promises to be no less challenging. Goldman Sachs on Tuesday cut its 2020 earnings forecast for the regional energy sector by 45%.

UOB Kay Hian, the investment bank, said Petronas would be forced to cut capital spending. "Covid-19 will be a triple whammy to Petronas in the form of oil prices (upstream income), petrochemical demand (downstream income) and disruptions or force majeures on long-term liquefied natural gas (LNG) exports (gas and new energy income)," it said in a research report.

Chinese oil companies, however, are seen as possible winners of the oil price war.

Lin Boqiang, a director of the China Center for Energy Economics Research at Xiamen University, called the lower crude oil price "a blessing" for Chinese oil companies. Since Beijing has set a floor price for refined oil products at $40 per barrel, the cheaper crude oil is, the fatter the profits generated for domestic oil refiners and distributors, Lin said.

Thanks to the government-controlled pricing mechanism, green energy groups in China have also been largely sheltered from the blow. "The oil price slump will have an impact on industries such as renewable energy and electric cars, but that impact is expected to be minor," Lin said.

In South Korea, state-run power company Kepco is a winner from the oil price drop because of its heavy use of LNG bought from Kogas. Kiwoom Securities estimated that Kepco benefits 110 billion won ($92.1 million) per year for every $1 fall in the oil price. Shares of Kepco jumped 8.1% amid Monday's market rout.

Slumping oil prices are also expected to provide relief for Indonesia’s state-owned oil and gas company Pertamina, which is planning to ramp up crude oil imports after it came under strong pressure to curb such purchases due to Indonesia’s widening trade deficit last year.

“There will be some [negative] impacts on the upstream business. But on downstream, this is good -- we will buy a lot while the price is still [low],” Pertamina president director Nicke Widyawati told local reporters.

High oil prices over the past few years have strained Pertamina's finances, as President Joko Widodo ordered the company to ensure the same prices for subsidized fuel across the sprawling archipelago, despite higher distribution costs to central and eastern Indonesia.

Chinese carriers could be among the biggest winners from the collapse in oil prices, according to Morningstar equity analyst Ivan Su, who covers Asia's aviation sector.

"None of the mainland Chinese carriers, including Air China, China Southern Airlines and China Eastern Airlines, hedge their fuels, so a falling fuel price will probably benefit them the most," Su told the Nikkei Asian Review. "Cathay Pacific Airways and Singapore Airlines hedged a significant portion at around $50 to $60, so they will likely experience some hedging losses in the near-term."

Paul Yong, an equity research analyst covering aviation and transport at Singapore's DBS Bank, agreed that Chinese carriers would be the biggest beneficiaries.

In addition to not hedging their fuel consumption requirements, "China's domestic capacity and flight demand has shown signs of recovery as the COVID-19 situation in China outside of Hubei seems to be under control," Young said.

"Within the rest of our coverage, airlines have roughly between 30-70% of their fuel needs for 2020 hedged, and will benefit more the less percentage they have hedged," he said.

DBS estimates that Malaysia's AirAsia Group has around 73% of its jet fuel hedged, while Singapore Airlines' hedging is around 65% and Hong Kong's Cathay Pacific has around 35% of its fuel needs for the year hedged.

Daiwa Capital Markets expects Cathay to report HK$2.4 billion in hedging losses in 2020, with a hedging loss also likely in 2021, assuming an average Brent price of $57.89 per barrel.

Overall, MIDF research analyst Adam Rahim said the effect of lower fuel prices would not be enough to offset the sharp falls in the number of travelers. 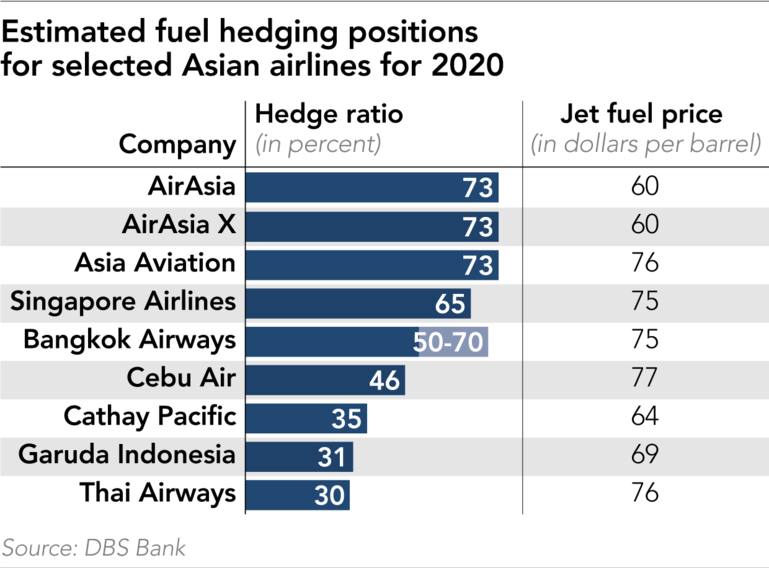 "As Japan, South Korea, Germany and France are some of the countries with the highest number of Covid-19 cases outside of China, the downward pressure towards the tourism and aviation sector of [Southeast Asian] nations such as Malaysia will be amplified," Rahim said in a research note.

Earlier this week the International Air Transport Association increased its forecast for 2020 losses for the global aviation passenger business as a result of the coronavirus to between $63 billion and $113 billion.

Banks already rattled by stalling economic growth due to the virus now face another hit, even if they do not have a big loan book in the oil industry. As Citigroup analysts in London said, "the risks from slower growth and asset quality concerns are beyond direct lending to energy companies."

One obvious risk for banks would be from interest rate cuts to try to shore up economic confidence. With the odds shortening that the U.S. will make a further aggressive rate cut, perhaps to zero, short-term rates in markets such as Hong Kong and Singapore are also set to slip. That would in turn cut banks' net interest margin, a key measure of lending profitability. Every 10-basis-point fall in net interest margins equates to as much as an 8% fall in profit.

That comes on top of an estimated $2 billion or more in lost revenue and an even bigger bill in provisions for soured loans due to the coronavirus outbreak, with the impact set to double if the epidemic is not contained by March.

S&P Global Ratings said in a note last month said the virus could add $770 billion in bad loans and triple mainland Chinese banks' gross nonperforming-loans ratio. Analysts polled by the Nikkei Asian Review see lost revenue of more than $300 million for each of the largest mainland banks as loan growth slips and income generated from the sale of wealth-management products, insurance, trading and arranging capital slumps.

HSBC, which is planning to redeploy capital to Asia, sees $600 million in additional loan losses as clients are forced to shut operations and demand for business from their consumers dries up.

DBS, Southeast Asia's largest bank by assets, estimates a drop of at least $100 million in revenue and a $50 million increase in credit cost. Standard Chartered, which focuses on emerging markets, warned last month that the virus outbreak and months of protests in Hong Kong meant it was likely miss its previous target of 5% to 7% growth in 2020. Hong Kong-based Bank of East Asia last month cut its loan growth forecast from mid- to high single digits to single digits and has lowered expectations for fee income from double digits to single digits. It also expects a deterioration of 10 to 20 basis points in credit costs in Hong Kong because of the outbreak.

Retail sales in Asia, especially in the high-end segment, are expected to suffer as people refrain from lavish spending due in part to slumping share values.

"Luxury retail as well as other non-essential purchases have already been hit badly in Asia because of the coronavirus outbreak," said Tommy Wu, senior economist at Oxford Economics. "The global shock to financial markets will dampen the already-poor sentiment even further," he said.

Unlike daily necessities, the sales of discretionary items are strongly tied to the performance of stock and property markets. Economists have explained the relations as the "wealth effect," which suggests people spend more as their investments rise, and less when they fall. Few shoppers are in the mood for high-end spending amid the coronavirus. (Photo by Yuki Kohara)

"When the stock market is up, it gives people who own a stock portfolio a sense of confidence and optimism about their future, and they allow themselves to indulge and spend more in discretionary goods and services, including luxury," said Pascal Martin, partner at OC&C Strategy Consultants.

International luxury brands have pinned high hopes on Asia for growth as they invested heavily to expand store network. Chinese consumers alone spent $115 billion on luxury items in 2018, accounting for about one-third of the world's total, according to McKinsey & Company's 2019 luxury report. Each luxury-consuming household in China spent an average of $11,500 per year on such items.

Following the U.S. market plunge, share prices of most of jewelry companies, cosmetics retailers and shopping mall operators listed in Hong Kong fell as of Tuesday noon despite an overall rise in the Hang Seng Index. Hayman Chui, an analyst at Cinda Research International, said the market plunge signaled people's pessimistic view on the macroeconomy. "Therefore, they would expect decreased income and reduce the spending on discretionary items," he said.

Martin said luxury sales had shown resilience during previous crises. But he said the current situation is "affecting people's life in profound ways."