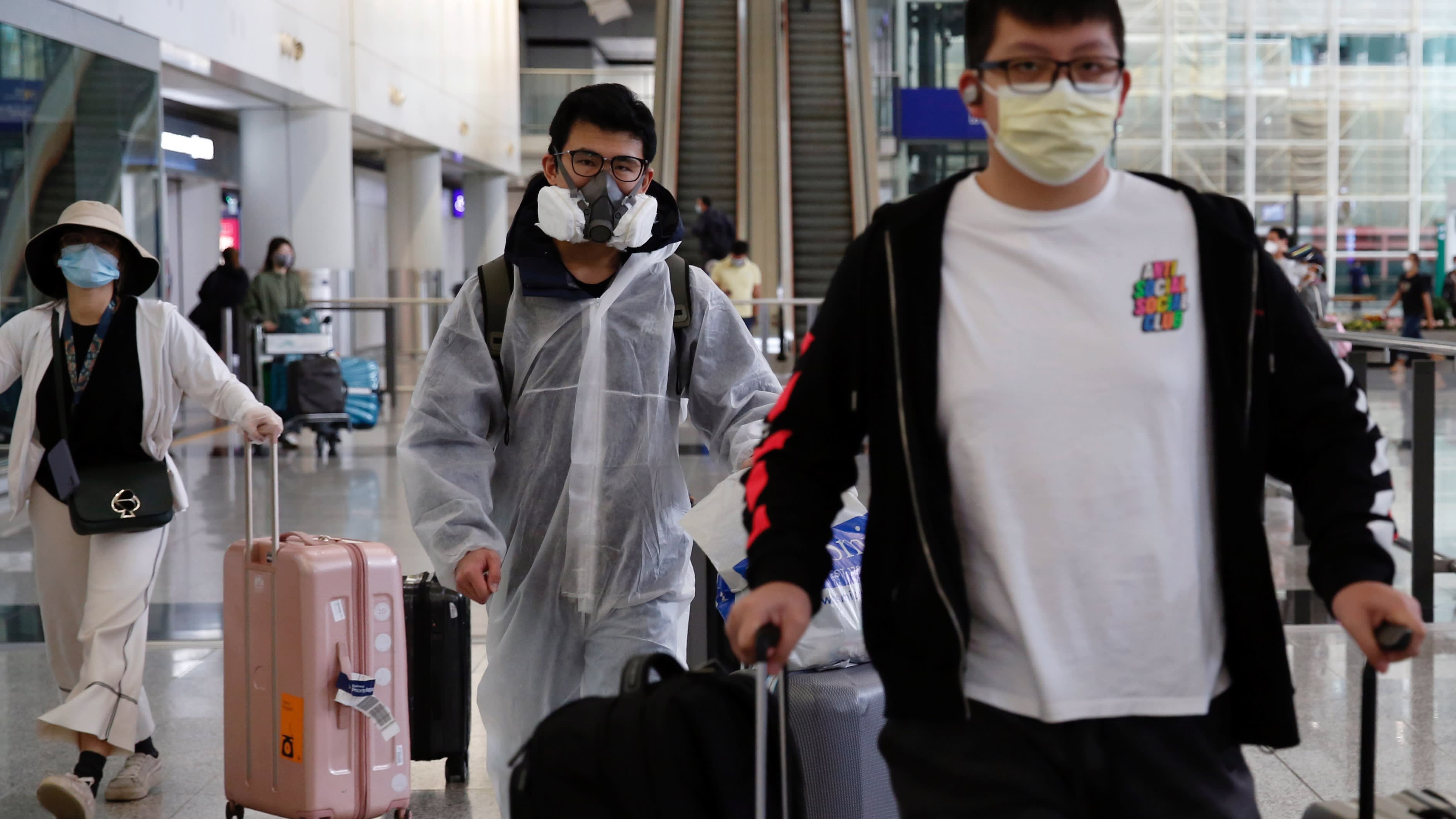 Officials in Hong Kong and other Asian cities are facing a new wave of COVID-19 infections among students and others returning from Europe and North America.   © Reuters
MICHELLE CHAN, Nikkei staff writerMarch 20, 2020 17:18 JSTUpdated on March 20, 2020 19:16 JST | East Asia
CopyCopied

HONG KONG/SINGAPORE/TAIPEI -- Melissa Woo, a 32-year-old Hong Kong accountant, thought she could finally relax a bit after working from home and abandoning her social life for nearly six weeks.

As the new coronavirus outbreak that had hit the city in late January seemed to have brought under control locally with only a few cases each day, she started hitting the bars again for Friday night happy hour drinks in early March.

This Friday, Woo is staying in once again following confirmation of at least five coronavirus cases in the last two days among visitors to the Lan Kwai Fong nightlife hub next to Hong Kong's central business district.

"Turned out that it is too early to relax," she sighed.

Hong Kong's total confirmed case count has more than doubled in just the last two weeks to reach 256, as of Friday. More than 90% of the new cases involve those flying in from abroad, especially students returning from North America and Europe where COVID-19 is now raging as well as members of returning tour groups -- or their close contacts.

"Hong Kong is facing a new wave of public health risks from import-related COVID-19 infections," said Undersecretary for Food and Health Chui Tak-yi at a news conference on Thursday.

Singapore, Taiwan and Macao, which had each also taken comfort from seeing new infections taper off for weeks, have seen surges of COVID-19 cases among arrivals in recent days too.

Officials from these densely populated economies are now struggling to corral the cases to avoid any new community outbreaks. Each managed to come to grips with the first wave of infections that emerged from China without having had to resort to some of the extreme measures adopted in the mainland as well as a growing number of other places in Asia, Europe and North America, such as mass home confinement, the closure of restaurants and stores or the banning of gatherings.

Natives of the four places have been rushing home in part to beat tightening controls on arrivals from abroad, but the alarming number of infections among their ranks is pushing authorities to set even higher barriers to entry.

Macao, for example, late last month began requiring arrivals from Italy, South Korea and Iran to go into quarantine for 14 days on arrival. It expanded that list to Japan and several other European nations last week.

Then Monday, after a South Korean who works in the city returned ill from Portugal to become Macao's 11th virus case and its first in 40 days, officials said anyone coming in from another country would have to go into quarantine. After another similar case, the city said Tuesday that all visitors from beyond greater China would be barred.

Then the following day as the case count hit 15 with more infections among foreign workers and relatives, Macao said it would even bar foreigners working in the city from coming back if they are now abroad.

Macao's economy, especially its hotels, are highly dependent on outside labor given its small population. Of 679,600 residents as of Dec. 31, 28.9% were so-called "nonresident workers," including those from mainland China and Hong Kong.

"We are seeing a lot more of these returnees carrying the virus, but we have not picked up... transmission of the virus within our own community yet," Singapore Minister for National Development Lawrence Wong said on Wednesday.

With some 70% of the city-state's infections coming in from abroad, the government issued a plea for all residents to refrain from going overseas. Anyone arriving after midnight Friday will have to self-isolate for two weeks with their location monitored via smartphone and random house visits.

Taiwan saw its case count more than double this week, to 135 as of Friday, due to arrivals from Europe and the U.S.

"We are very concerned and under massive pressure," said Chen Shih-chung, minister of health and welfare and head of the Central Epidemic Command Center, in a news conference. "The next two weeks will be crucial to see if we can still stay safe."

Taiwan on Thursday barred entrance of foreigners except diplomats and some business visa holders. Outbound tour group travel has been banned until the end of April. Returning locals face quarantine and a ban on using public transport.

Hong Kong has similarly tightened its restrictions on arrivals from abroad. Those who breach quarantine are subject to six months' imprisonment and fines of up to $25,000 Hong Kong dollars ($3,220). Lawmakers on Friday called for the government on Friday to go further and simply ban all nonresidents from entry, public broadcaster RTHK reported.

"This could be a long and exhausting battle, but it is important that we never become complacent," Yuen Kwok-yung, an infectious disease expert at the University of Hong Kong who helped fight the SARS epidemic, told Hong Kong media this week. "Once we slacken, we could be the next South Korea or Italy."