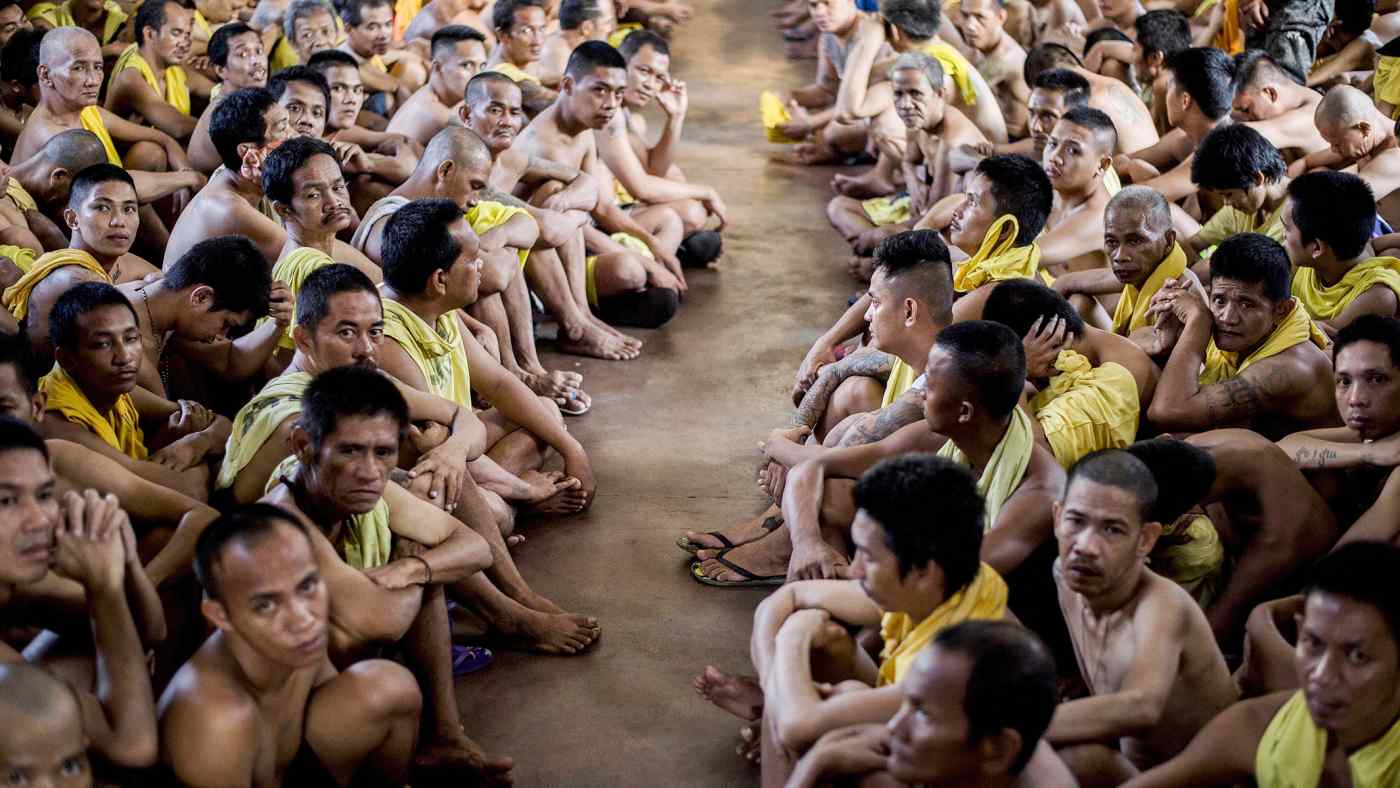 Sokhom is one of 1,850 inmates in Phnom Penh's Correctional Center 2. The facility, Cambodia's only prison for women and children, was built to house 350 people. It is just one example of hundreds of severely overcrowded detention facilities in Southeast Asia that experts say are ticking time bombs for an explosion of coronavirus.

Even before the COVID-19 pandemic, the cramped, poorly ventilated and unsanitary conditions in prisons like CC2 and Correctional Center 1 -- the nearby men's prison in Phnom Penh, which is 500% over capacity -- were a health hazard for inmates.

Amnesty International this month published footage from inside a Cambodian prison, showing prisoners draped over each other in a packed cell, conditions the human rights group called inhumane. The situation at CC2 is also dangerous. Earlier this year, Sokhom, who was pregnant when she was imprisoned for possessing a small amount of drugs, miscarried after falling in the lavatory.

Now, experts and inmates' families alike fear the region's jammed prisons could become death traps for thousands, including many, like Sokhom, incarcerated for petty crimes.

"I'm afraid she will contract [COVID-19]," said Kimseang, a scrap-metal collector who looks after seven children, including two of her sister's, told the Nikkei Asian Review. "She's there with a thousand people. I'm afraid she will die and her children will be left alone." As governments scramble to curb infections, the pandemic has exacerbated a yearslong crisis in many of the world's penal systems, which hold more than 10 million people in total, according to the World Prisons Brief, an online database.

In the U.S., which has the highest incarceration rate in the world, federal prison authorities have reported 465 inmate and 296 staff coronavirus cases, including 18 prisoner deaths. The U.K. has confirmed 207 prisoners in 57 jails have tested positive, with 13 deaths linked to the virus, according to the BBC. Several other European countries have reported prisoner deaths from the virus -- 12 people in Italy died in prison riots in response to a ban on visitations imposed in March.

Similar measures to curb infections in prisons have sparked unrest around the world. Breakouts linked to tensions over the coronavirus have been reported in Thailand and Brazil; riots have erupted in Indonesia, Columbia and Turkey.

The situation in Southeast Asia is particularly acute. In guidelines released last month, the World Health Organization urged authorities to take urgent action to protect inmates, including stringent screening of all those entering prisons, enhanced hygiene, and making space available for vulnerable prisoners.

Governments in Cambodia, Thailand, Indonesia, Myanmar and the Philippines have stopped visitations, and say they have boosted screening and hygiene. But with systems close to the breaking point, implementing such measures is difficult. Coupled with a lack of resources, particularly for health care, jails are petri dishes for infection.

"If you have an outbreak in a setting like that it will be an explosive outbreak. The curve will accelerate extremely rapidly," said Stuart Kinner, a global health professor at Melbourne University who co-authored a paper in The Lancet, a medical journal, highlighting the dangers of COVID-19 in prisons.

Kinner said cases of people without symptoms passing along the disease, and the "porous" nature of many prisons, meant measures such as screening staff and new prisoners would not prevent an outbreak. He said countries needed to "urgently" reduce prison populations.

"If they don't, they're really facing a very significant risk of one of two very bad outcomes. One is that there's a massive outbreak in prison and that overwhelms the hospitals and undermines what everybody else is doing to flatten the curve.

"The other is that there's a massive outbreak in prison and they just leave it in there and effectively sentence a whole lot of vulnerable people to death." People wait for the release of family members and friends outside the Insein Prison in Yangon. The government is trying to ease pressure on overcrowded jails due to growing fears of the coronavirus.   © AFP/Jiji

Some countries have already expedited the release of low-risk and vulnerable inmates. Turkey this month passed legislation to free some 45,000 prisoners. According to reports, Indonesia has so far paroled 36,500 people two-thirds of the way or more through their sentences.

While welcoming the move, Genoveva Alicia, a researcher at Indonesia's Institute for Criminal Justice Reform, said that no protocols had been set for those freed, potentially creating further risks for spreading the virus as they return home.

The pandemic, she hoped, will serve as a wakeup call over the consequences of the country's punitive approach to drug use and its reliance on imprisonment to control it.

"We've been working for so long, telling them that it's a serious problem -- that you will get a big problem in the future, and then this happened," Alicia said. "From what we have seen, the prosecutors and judges, they've started to think of other options ... like probation."

In Myanmar, 46 prisons and 50 labor camps with an official capacity of 66,000 people held an estimated 92,000 prisoners, some 15% of whom are awaiting trial, according to a Human Rights Watch statement earlier this month.

However, with authorities under pressure, that number is set to drop dramatically. The government on Friday announced that nearly 25,000 prisoners would be pardoned, according to local media outlet DVB.

While the pardons are an annual occurrence, granted for the Thingyan holiday, the number is a huge increase on last year, when about 9,500 were released.

Those inside remain vulnerable. A severe lack of prison health care has already led to problems with tuberculosis, hepatitis and HIV, said Liv Stoltze Gaborit, a researcher from Denmark's Roskilde University who has studied the issue.

Gaborit said that Myanmar's prison authorities are doing the best they can with the resources at their disposal -- disinfecting sites and requiring more handwashing -- but added that they are hamstrung by overcrowding and staff shortages.

"They don't have enough manpower to actually treat people. And even though the prison is trying to recruit more medical staff, they can't find people who want to work in the prison," Gaborit said.

Olivia Rope, director of policy and international advocacy at Penal Reform International, said the COVID-19 pandemic highlights the need to move away from harsh penalties for drug crimes and favoring imprisonment, and to embrace alternative approaches for low-risk offenders.

She noted that in Thailand, which has prison system capacity of 255,000 people but holds 380,000, 82% of all women in prison were serving sentences for drug offences.

"Fundamental reform is needed," she said. "It is not fair, nor effective or in line with human rights standards to have prisons at occupancy levels where they are dangerously bursting at the seams." 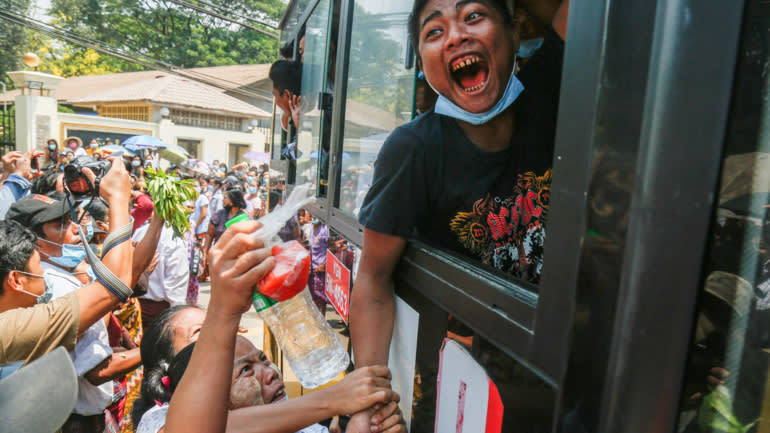 A man is released from Insein Prison in Yangon on April 17.   © AFP/Jiji

The Philippines is starting to wake up to the crisis. President Rodrigo Duterte's drug war has helped make the country's prison system the world's most overcrowded.

In a letter this week, the Judicial Reform Initiative, which is led by business groups, urged the country's Supreme Court justice and justice secretary to identify "selected groups and individuals that could be released" to ease overcrowding in prisons.

Facilities managed by the Bureau of Jail Management and Penology, which generally holds people before conviction, are at 600% capacity. So far, one inmate is believed to have died at a bureau jail in Quezon City, forcing the isolation of some inmates. The bureau on Friday confirmed at least nine inmates in its facilities had tested positive for COVID-19.

The Bureau of Corrections, which holds those convicted and sentenced to more than three years in prison, reported its first case over the weekend. Spokesman Gabriel Chaclag said the bureau had set up tents for inmates to maintain physical distance at night, and had isolated prisoners showing flu-like symptoms.

"They [prisoners] also set up their own system to maintain distancing," he told Nikkei, adding that releasing inmates would be "tricky," and complicated by the country's lockdown.

The International Committee of the Red Cross has been working with prison and judicial authorities in Cambodia, the Philippines and Malaysia to reduce the risk of COVID-19 outbreaks in detention facilities.

ICRC spokesman Pawel Krzysiek said it was imperative that governments act now to stop the virus from running rampant in prisons. With many inmates already suffering from preexisting health conditions, a small outbreak could quickly become disastrous, he said.

"One has to remember that prisons are not walled off from the world when it comes to disease transmission. Viruses can enter and leave a detention facility through family visits, detention staff, delivery personnel and detainees who enter or leave when newly sentenced or going to court," he said.

"For those who yet are to take action, our message is clear: detaining authorities must act now to protect the health of detainees, staff and wider society. The weaknesses of the health system are not magically going away."