With Sydney in lockdown, CEOs seethe and polls shift ahead of 2022 election Long seen as a rare pandemic success story, Australia's narrative is quickly shifting toward one about snatching defeat from the jaws of victory. Roughly 10% of the population is fully vaccinated -- last in the OECD and well behind Western counterparts like the U.K., at over 50%, and Canada, at 45%.

Meanwhile, Sydney -- the country's largest and most economically important city -- faces a potentially open-ended hard lockdown against the virulent delta strain. Movement controls affecting the area's 5.3 million residents had been due to end Friday but were extended until "at least" July 30.

Compared with hard-hit Asia-Pacific neighbors, Australia's daily infection tally looks minuscule, at around 100 cases. Total infections throughout the pandemic are still under 32,000, with 912 deaths. But the slow vaccine rollout is keeping the travel sector in limbo and raising fears that the delta variant could quickly overwhelm the country's defenses.

"The government's failure to secure a vaccine supply is turning Australia's great success in managing COVID into a terrible failure," said Gabriel Metcalf, CEO of the Committee for Sydney, an urban policy think tank and lobby group that counts major corporations, public institutions and non-profit groups as members.

"The only way we get out of this is to accelerate vaccinations." 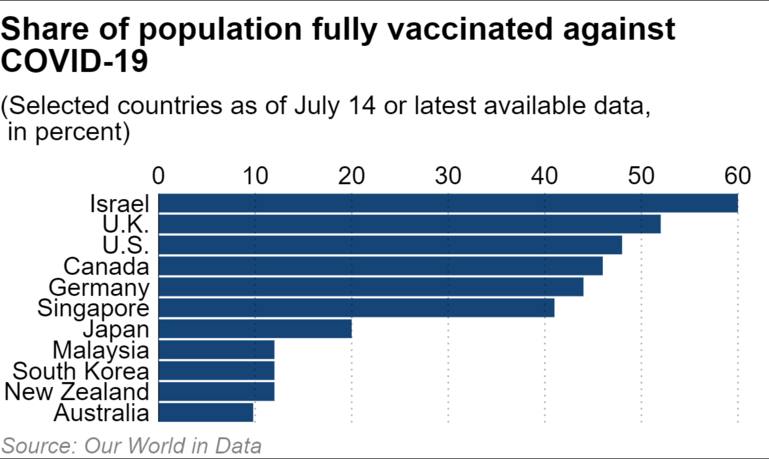 The vaccine rollout has been partly plagued by a shortage of Pfizer shots, though local media reported this month that 4.5 million doses will arrive in August rather than September.

"It's extreme, it's not a small disappointment," Vogelman said. He explained that, until recently, low infection rates, government policies and social cooperation had given Australia a "massive advantage."

Mixed messages have sown confusion. For example, Morrison in June said anyone under 40 who wants the AstraZeneca vaccine could take it after consulting their doctor -- only to have the head of the Australian Medical Association quickly insist the shot is only recommended for people aged 60 and up.

"Messaging has to be consistent. It needs to be authentic. And it needs to always provide you with some form of action to take," Vogelman said. It has met none of those criteria, he argued, calling it "appalling."

Few are feeling the pain as much as the travel industry.

"It's dead," he said. "We can't go anywhere, Australians can't join tours and that sort of thing overseas, so the international industry's dormant, and people can't come here because not enough of us are vaccinated to allow vaccinated people to come in. And so, as long as the borders stay closed, the industry's just bleeding cash."

While internal travel has helped, Thompson noted that much of the domestic segment is also geared to international visitors. "I'm thinking of trips specifically designed for Asian travelers in Australia, so the language and all the cultural things are taken care of, and the product is presented in a way that is most interesting and engaging for that market," he said. "Well, that's dead too."

Tourism and Transport Forum CEO Margy Osmond said in late June that the industry stood to lose 6.3 billion Australian dollars ($4.7 billion) in spending this year during the June-July school holidays. The state of New South Wales -- where Sydney is located -- accounts for losses worth AU$2.1 billion, or AU$153 million a day.

Mindful of the state's dependence on tourism, the government of New South Wales has thrown businesses an AU$5.1 billion lifeline, including AU$1 billion from the federal government.

"The tourism industry continues to suffer from a lack of international travel, and the lack of confidence among Australians in the domestic travel market and in planning holidays, is diabolical, making it very difficult for businesses in our sector to stay afloat," Osmond said.

"This latest outbreak is proof of how important it is for the vaccination program to be fast-tracked and for all Australians to get the jab as soon as possible," she stressed.

As for Morrison, any political immunity he might have enjoyed thanks to Australia's early containment success appears to be wearing off fast. 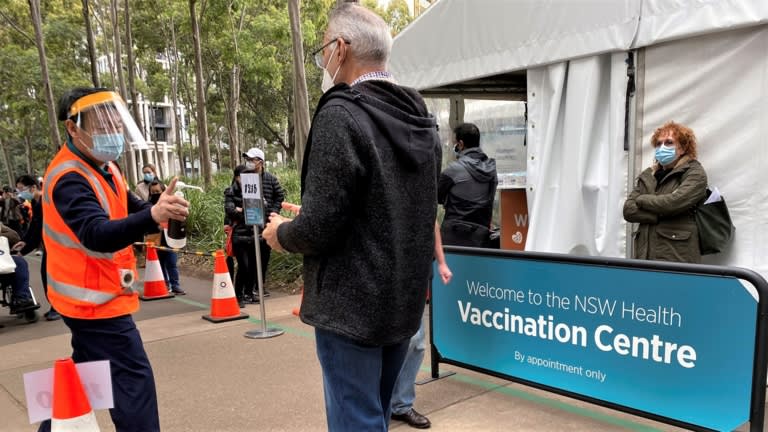 A man receives a spritz of hand sanitizer on his way into a vaccination center in Sydney on July 14.   © Reuters

Other research analyzing polls taken between April 21 and June 26 shows the prime minister's net rating -- approval minus disapproval -- fell 9 points to 18%, driven by women and voters in mining states, The Australian reported. Besides his handling of vaccines, Morrison has been criticized for failing to grasp the seriousness of gender inequality in Australia after a former staffer of his Liberal party, Brittany Higgins, alleged that she was raped inside Parliament House in 2019.

At the party level, the same research put Morrison's coalition and the center-left Labor Party on an even electoral footing. But Greens voter preferences -- ballots that can be transferred to another party if a candidate falls short of 50% of the vote -- propelled Labor into a 51% to 49% lead.

These are not the sort of numbers Morrison wants to see with the next federal election approaching. Under normal circumstances, the vote would be held by May 21 next year, though Morrison could leave it until as late as September.

New South Wales, a state held by Morrison's Liberals, will be a key to victory. But while exasperation there grows, opponents elsewhere have accused the prime minister of favoritism.

Victoria announced its own five-day lockdown on Thursday as authorities rush to stamp out a small coronavirus outbreak, before it worsens. Morrison subsequently guaranteed Victoria the same level of federal government support as New South Wales.

Most Australians can only wait and hope that their COVID-19 luck has not run out.